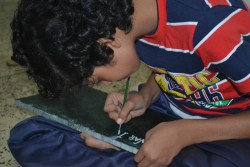 Does history mean only memorizing hard facts? Or, is it that history can be experienced as an illuminating light— enabling us to make sense of  the present? Here is an article – based on a concrete pedagogic practice – that raises these critical issues, and generates a new possibility.

Education in its truest sense is not just a process of gaining full command over the texts and scriptures; rather, education involves a lifelong process whereby a person’s innermost potential is revealed through an experiential understanding of life. Modern systems of education are in urgent need of critical restructuring and pedagogic innovation. In other words, there is a need to build a bridge between theory and practice so as to elaborate the deeper meaning of knowledge which enables us to decipher the mystery of life as well as suggest alternatives to contemporary modes of existence, and simultaneously help us improve upon arenas that are still in need of change.

But today education has assumed a new form – a new structure has emerged due to the overarching impact of commercialization in society. This has made something as sacred as education into a marketable product, capable of being brought and sold in the market place. Such an attitude has made us look at education only in materialistic terms, and not as something that gives fragrance to the flower of human possibilities.

Modern educational institutions seem to function like a factory that seeks to produce only  professionals, and orients them to work in mega corporations.  Thus education has turned into a mere necessity which enables one to upgrade his/her resume and get a high paying employment. There is, however, no deep and meaningful engagement with education. Ivan Illich describes this process as ‘hidden curriculum’ which promotes conformity, bureaucracy, instrumental rationality, hierarchy and competition in society. As a result, the  curriculum is modulated according to industrial needs and requirements. And the branches of knowledge that are not of immediate relevance in the job market are considered trivial.   See its consequences. Amongst us there are engineers, MBAs, doctors and academicians who have acquired specialized professional skills; but their education has not necessarily made them contemplate and examine their own values and the deeper purpose of existence.

As we have said, education is the force that enables us to make the most of the present and carve out a path for a better tomorrow.  In order to disseminate the ever growing branches of knowledge, institutionalized education, we know, is centered on diverse academic disciplines.  The present article is an endeavor to understand the relevance of history as a subject for our contemporary times. I would not hesitate to argue that the conventional form of teaching history (at least, school history)  seems to involve memorizing hard facts; and its importance lies only as far as quiz contests and competitive examinations are concerned. As I recall my own school days, I realize that history is often perceived as a discipline that requires no creative imagination, no analytical skill, but only the ability to memorize the so called hard facts – dates of war, treaties, pacts and political resolutions. History is divorced from the present concerns of social life. We look at the past only as something that is distant, but do not see ourselves as active participants in creating it. It is true that history deals with the past, but this past is simultaneously the reflection of the present.  That is why, today as I look back I feel that is important to make a creative intervention and share the tales  of history with young children in a manner that involves them, arouses their imagination, and makes them see that history is not a  museumized artifact; it is alive because the past is not just the past, it is also our present and possibly our future. For example, a reflexive study of emperor Ashoka,  the Kalinga war, the foreign conquests, the independence struggle and the Gandhian movements suggest how history enables us to make sense of our present context. The past events cannot be separated from the present situation. The willingness to learn from our past, it should not be forgotten, is the only solution to all our contemporary issues. In the curriculum of school text books (baring some remarkable exceptions), however history is, made into an utterly boring subject to learn.

When I was teaching war and peace to a group of children, I asked them about Ashoka.  True, they spoke of the Kalinga war, his conversion into Buddhism; and recalled some of the scriptures which Ashoka had constructed, as well as his edicts and messages. I could realize that, for them, it was merely factual information which they had memorized; but there was hardly any organic, living relationship with history as a subject. Look at all our contemporary conflicts – be it terrorism, caste violence, communal hatred, disputes between the state and people, or the war between the two nations. The recurrence of these events are going against  all those noble efforts  through which the great legends of history sought to nourish our civilization. For example, we fail to realize the significances of peace which Ashoka felt after the Kalinga war, despite having all details of this historic event. The paradox is that this has remained only superficial knowledge, and not become part of our life.  Hardly anything has changed—people are dying; blood is flowing on the roads every day. And all of us—parents, teachers and media celebrities—are promoting an environment that values greed, power and violence. From a young age children are playing with models of guns and knives; moreover, video games, comic books and cartoon films seem to have naturalized violence and hatred in everyday life.

Indeed, we are bringing up our children in a society that does not see any problem with violence, it normalizes hatred. This, I feel, is a serious problem as it gives birth to a society that is restless, impatient and violent. If as adults we could see history more deeply, we would be able to teach children the values of love and peace.

I realize that such a profound reflection coming from the mouth of a warrior  like Ashoka against war itself is a proof of man’s latent humanity and spirituality, and is a great message. This could be a great inspiration in our daily life. If we allow such great messages to penetrate into our consciousness there would not be any further possibility of war. With this creative restlessness began my humble effort and experimentation. Theses children were reading about Ashoka at a time when newspapers and television channels were constantly portraying the images of Israeli attack on Palestine. I wanted to contextualize the tales of Ashoka. I showed them a documentary film on the Second World War ; I showed the visuals of the Gulf war and the recent war in Palestine. I looked at their eyes, and very spontaneously they articulated the need for peace. It was at this juncture that I went beyond the printed words of the prescribed school history texts, and persuaded my children to imagine themselves as Ashokas of contemporary times, and  make new inscriptions  filled with the messages for the world to stop war, and say ‘yes’ to humanity. For us, it was a great felling to collect the pieces of rocks, and make them understand why they ought to work on these rocks and write the messages,  which should be communicated  to the larger world for creating peace, prosperity and happiness. The idea excited them; they started working with pencils and colors, they soon came forward with a series of beautiful messages…Their inscriptions were ready. They looked at the book, saw the black and white picture of the inscriptions that Ashoka created in his time, and now they could see their own inscriptions. History became alive and experiential; past and present were merged.

The teacher plays a very important role in society, he/she can cultivate a sense of reflexivity in children; they should learn that something as beautiful and as crucial as peace cannot be found in technological advancement or material superficiality; peace is something all of us carry within.  And with creative pedagogic interventions history, as my humble efforts suggest, can be felt and experienced in an immensely illuminating way.