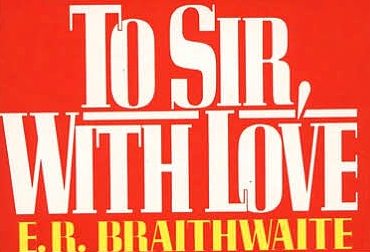 The Art of Teaching: A Process of Becoming

Here is an inspiring account that makes us see the power of a teacher—the way a black teacher overcomes the stigma of racism, and transforms his students. Even though the book was published in 1959, The New Leaf finds it relevant because its deeper message transcends time and space.

By  Sana Khan is  a research scholar in JNU, New Delhi

To Sir, With Love, an autobiographical work was published in 1959. It covers about eight months in the life of its author. Its author E.R. Braithwaite was born in Georgetown, British Guiana. He studied to become a communications engineer. At the time of World War II he enlisted himself in RAF. After the war got over, he realised that he was accepted as an airman, but as a black man he was discriminated and denied any other job he sought. After much struggle, as the narrative unfolds itself, he manages to get appointed as a teacher in London. The secondary school where he begins his teaching job has children from less affluent areas, and the level of delinquency is quite high. These children are products of degrading slums and post-war disillusionment. They c had driven away all previous teachers who tried to teach them, instruct them or control them. For them, Braithwaite is yet another teacher whom, they feel, they will get rid of.  The Greenslade Secondary school does not allow corporal punishment. The school, its headmaster and other staff members want the children to become responsible/respectable citizens; but the result is that they continue to remain uncouth and ‘cockney’. However, Braithwaite, despite a series of unpleasant episodes (because of his skin colour or otherwise) in the classroom,  manages to be successful in not just inculcating good behaviour but rouse serious thinking on the problem of prejudice and bigotry existing in the British society. Eventually he is able to create a place for himself in the school where he is loved and respected by students and teachers alike.

Braithwaite is able to give not just subject knowledge but lessons in importance of humility, patience, respect and love in life. The beauty of the narrative is that what he teaches his students, he learns the same things from them later. On one occasion when the mother of one of the boys in class – the only mixed race boy – dies, the other students make collection for a wreathe; but not one of them is able to deliver it, as going to a coloured person’s house would be looked down upon. At this moment Braithwaite is filled with negative thoughts and feels whatever he has taught has been for nothing. The next day, a still bitter Braithwaite goes to the funeral:

“Tears were in my eyes, unashamedly, for there, standing in a close, separate group on the pavement outside Seales’ door was my class, my children, all or nearly all of them, smart and self-conscious in their best clothes. O God, forgive me for the hatful thoughts…” (p. 169).
He realises he really loves these children. He learns from his students to be more tolerant and acceptable, the same lesson he had taught them. From making them presentable in appearance to respectable young adults Braithwaite transforms them, and brings out their innate potential. When the school year ends his students express their gratitude and affection with a gift marked “To Sir, With Love”.

This book can be seen as an excellent narrative of teaching the unteachable, or as a triumph of perseverance and courage to put prejudices at bay.

[I began one Geography lesson by saying:

‘Geography is the study of places, and the people, flora, fauna and mineral deposits to be found there.’

‘What’s that Sir, flora and that?’

‘Flora is a term used to describe all vegetable growths either on land or water, trees, weeds, water plants, cultivated plants, etc. Fauna refers to all animal life, large or small. Today we shall consider some aspects of life on the African continent.’

‘You don’t come from Africa, do you Sir’ Seales enquired, though I had answered this question many times before.

‘No, Seales, I was born in British Guiana.’

‘It’s on the northern coast of South America, the only British colony there. You can easily find it on the map between Suriname and Venezuela.’

‘That’s the same as Demerara, isn’t it, Sir, where the sugar comes from?’ Fernman’s question was one which I had been asked even by teachers on the staff,  who were in the main sadly uninformed about the Colonial territories, protectorates and dependencies.]

But it lacks a certain appeal that a modern reader expects in an autobiography. His love affair with Ms. Blanchard does not engage the reader’s emotions. The problems that a black man and a white woman face as a couple in a prejudiced British society are not elaborated except for mention of a few incidents. The girls in Braithwaite’s class, from being young girls take on becoming responsible adults. Their maturity is seen in the way they treat Mr. Braithwaite. One student falls in love with Mr. Braithwaite for the man he is. His intelligence, sensitivity, his ability to motivate and inspire his students touches her. There is a generational gap between them, he is a black man and above all, her teacher. Yet she dares to love him. The author’s treatment of this account seems immature. Some questions can be raised about Braithwaite’s accuracy in narrating these past events and reconstruction of these conversations. For the reader it’s difficult to understand which parts are autobiographical and which parts fictional. For example the reader finds it hard to digest that Braithwaite is not aware of the prejudices against the black till he starts searching for a job.

Coming to the overt message of the book, one can say that, despite the weakness of the non-fictive voice, it inspires its readers. The relationship between teacher-taught acquires a new meaning. The unruly students transform into kind and courteous young adults. Braithwaite is successful in giving a detailed account of his perception of students from being crude and unkempt to him realising that these students are individuals who require “affection, confidence and guidance, more or less in that order, because experience has shown that these are their most immediate needs” (p.175).

From a black man’s perspective the book captures problems of racism and discrimination. There is the idea of forgiveness, acceptance and sympathy against hate and prejudice at the heart of Braithwaite’s narrative. He teaches his students to see beyond skin colour. He shows how the relationship between teacher and students is not a power relation but one where teacher and student are equal partners in the process of learning. From narrating problems of discrimination to addressing issues in education— Braithwaite manages to keep the reader interested. It has been over fifty years, and the book is still widely read. Possibly because one can still feel it resonate with the message of the Black Lives Matter Movement: “It is easy to reach for a gun or a knife but then you become merely a tool and the gun or the knife takes over, thereby creating new and bigger problems without solving a thing. So what happens when there is no weapon handy?” To rouse your imagination, read this timeless book.