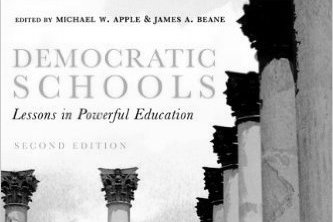 Democratic and critical educational practices are extremely crucial in bringing about humans who strive towards a sustainable society. This book review focuses upon an important text that raises important points about the nature and significance of a truly emancipatory education and infolds the trajectory of four schools which undertook this important journey.

Roma Bhattachrya is currently in MPhil in the CSSS, JNU. Her interests are in social theory, education and nature and the environment.

This small edited volume brings together stories of four schools and their tryst with democracy. In an attempt to solve problems posed by an education system based on standardised testing and achievement, Apple and Beane tell stories of teachers, students and parents across four schools in different parts of USA coming together to create alternative paths of learning. The common thread binding the stories together is that each school has placed democratic and critical education practices at the centre of their curriculum. Written with a kind of unpretentiousness that might take a reader who is used to jargon by surprise, this book drives straight into the heart of the matter.The idea of democracy in theory, appeals because of commitment not only to the individual, but also to the ideas of common good and social justice. Apple and Beane put forward a very strong and vital point in the introduction when they argue that in advanced industrialised countries, the meaning of democracy has been wrongly interpreted as the sole pursuance of individual interest. What is forgotten is the big picture—welfare and justice. It is this sentiment that is found to thrive in the stories in this book. The first chapter written by Beane and Apple places the discussion by referring to the crisis in public schools— the prioritising of business and industry needs at the cost of morality and ethics education; critical thinking thwarted by censorship of study material. In the light of these challenges, how does one imagine democracy in public schools? As the chapter progresses, the reader is taken through different meanings of democracy and how these meanings can find space within schools and their curriculum. Access to information, participation in decision making by all are some of the features of a democratic curriculum. The writers acknowledge the difficulty of balancing the requirements of acquiring expected knowledge and skills and more significant education. The question now is how is this to be done? With these crucial questions, the reader moves on to the stories. The narrative is now in true democratic spirit, handed over to those who have done the real work—the educators in these four schools.

The first story of Central Park East Secondary School in New York tells us how the educators sought to balance the need to prepare children for state examinations along with a more holistic need to prepare them for a socially productive and personally satisfying life. The idea of kindergarten—interaction within small, multi-aged groups in intimate and interesting ways—makes the model of learning of this school unique. The most interesting feature is their system of evaluation. Instead of writing tests or examinations, the child is required to prepare portfolios or projects. These portfolios are then reviewed by small committees consisting of teachers, fellow students and guardians. Such a system provides an alternative to the heavily centralised and impersonal system of evaluation that is most common in schools.

The second story takes us through the journey of Rindge School of Technical Arts in Cambridge as they attempt to reinvent and radicalise vocational education by moving beyond the traditional dualism between academic and vocational studies. One of the ills of this kind of segregation has been the alienation of low income students from academics which has further strengthened socio economic disparities. At this juncture, the school has sought to establish changes in vocational schooling by incorporating broader content and skills of academic education into vocational education. In order to design a curriculum that fulfils this requirement, teachers are given more space to reflect critically on the curriculum, create activities together as well as involve people from outside such as academic teachers, consultants and technical assistants.

The third story tells us about the creation of a two-way bilingual elementary school, La Escuala Fratney in Wisconsin. The distinguishing feature of the school is its commitment toward inclusion through the use of a multi cultural anti-racist curriculum which highlights the experiences, history and culture of various geo-political groups and teaching in both English and Spanish to encourage language diversity inside classrooms. Students are encouraged to use the experiences of their own communities to enrich their learning.

The last story tells us of the efforts of the educators of Marquette Middle School to create an integrative curriculum involving both learners as well as teachers. This meant not only did children have a say in what they wanted to learn but having faith in them to be capable of self-evaluation. Thus, one of the interesting features among many others is the conducting of parent teacher conferences where students are welcome to join in and talk about what they judge to be their own ‘best work’. Thus shifting the power in terms of both content design as well as evaluation forms a crucial aspect of establishing democratic practices in classrooms. In all the four stories, one realises that certain practices such as extending participation to the larger community, allowing a degree of autonomy to teachers in curriculum building and making children’s personal experiences a legitimate source of knowledge bring the lofty idea of democracy down to practical lived reality. There are three things that stand out for me here. First, democracy in these schools is part of everyday action and communication instead of only being a grand ideal. Perhaps this is a true example of the kind of communication that Jurgen Habermas was hoping for where the practice of dialogue and the art of listening lead to true democracy. Second, a lot of illuminated critical thinkers such as Michael Foucault, Ivan Illich have spoken about schooling as a form of social control, as an arena where vested interests of the state and powerful social groups are played out. It is heartening, at this point, to read stories that not only re-instil faith in democracy but also redefine the meaning of democratic practices by bringing in elements of love, care, empathy and inclusiveness. Finally, creating alternative paths to education is a difficult task. This book is thus not merely a compilation of success stories; no account is perfect. Each story tells the reader honestly of the struggles that go into the making of democracy even at the smallest levels of decision-making. It is these moments, however, that makes these stories real and ensures the reader that change, even in small measures, is always a possibility.

This article is published in The New Leam, February Issue( Vol.2  No.9) and available in print version.

Unloading the Heavy Baggage of the Ego, Classroom as a Site for Self-discovery – By Rohan D’Souza