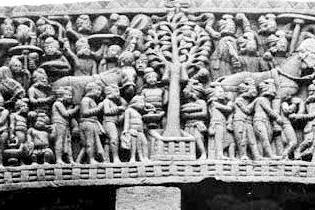 The Urge to Know…

Every child, The New Leaf, believes is like Munia; but not everyone gets a mentor like Ella Datta—the way she narrates the history of Indian art, and arouses Munia’s interest. Here is an effort on our part to share the tale of a beautiful dialogue with our readers.

It is in the domain of art that we find ourselves, our ‘surplus’—our ability to see beyond mere utility, and realize our creative potential, our aesthetic sensibilities, our modes of articulation and expression. It is , therefore, important to appreciate yet another kind of history—not just the political history, but the history of art: how through the history of, say, painting and sculpture, we could see our evolution, our culture, our aspirations. At a time, when education is becoming increasingly utilitarian and market-oriented, and schoolchildren  are compelled to live in the world of prescribed textbooks, the ritualization of examinations and performance anxiety, one strives for fresh air: something that illumines the mind, and conveys a message that there is something higher in our life pursuits. It is in this context that Ella Datta’s beautiful art of narrating the history of Indian art arouses our attention. Her book Lines and Colours: Discovering Indian Art (NBT, New Delhi, 2002, reprint 2009) is a piece of aesthetic wonder, an innovative learning material which, we believe, ought to be celebrated by children, teachers and parents.

See the curiosity of Munia—a thirteen year old girl who has begun to feel ‘the magic of lines, colours, forms’, and is full of ‘questions about India.’ And Ella Datta undertakes a journey with her, converses with her, and through this dialogue you and I learn a great deal about Indian art. Feel the journey. They

are visiting the Harappa Gallery at the National Museum in New Delhi, and the first object that catches their eyes is the figure of the famous Dancing Girl of Mohenjodaro. And with absolute delight and surprise Munia remarks: ‘How tiny she is!” It is true because the dancing girl looks much bigger in her photographs. In fact, this bronze statuette is barely four inches high. But then, ‘the Indus Valley artists and craftspersons were masters of the miniature.’  But why is she regarded as the Dancing Girl? Munia listens, and Ella explains:

“ The title ‘Dancing Girl’ is a surmise. Possibly it was given because of the sense of movement the figurine conveys. Scholars all over have commented on the vivacity of the stance. She is without any clothes which is rare in Indian art. Her left leg is slightly bent and her left arm rests lightly on her thigh. Her weight is placed on her right leg and her right arm is bent and resting on her hips in an inso- uciant gesture.”

Indeed, it speaks volumes of a metal caster’s ‘superb skills’. Munia is curious; she is eager to learn.  She moves through history; and Ella does not disappoint her. She tells her about the Great Stupa at Sanchi explored by Sir Alexander Cunningham in 1851. Yes, located on a low hill in Central India this great hemispherical construction housed relics of Buddha. Possibly it was built around 250 B.C. in Ashoka’s time. To describe to Munia the Great Stupa at Sanchi, Ella shows her a picture of the beautifully carved east gate. On the architraves of the gate are carved stories of Buddha’s life. What a great mode of storytelling!
“ In ancient times, when there were no newspapers, magazines or possibly story books, the Buddhist monasteries found an effective way to narrate Buddha’s life and teachings. In Stupa architecture, the artists found many ways to narrate episodes of Buddha’s life. They also recounted Jataka stories which described events in the many incarnations of Buddha.”

From the dancing Girl of Mohenjodaro to the great Stupa at Sanchi—Munia is learning, and learning with great wonder, the significance of art: its symbolic meanings, its location in history, and its ability to make us humble and realize how we have evolved. Take, for instance, Munia’s engagement with Nataraja. Ella takes her to the National Museum, Delhi to show her the bronze Nataraja of twelfth century. It is a magnificent statue, a little above three feet in height.  But the rhythm and energy of the work is truly awe inspiring.  And how beautifully Munia is told about its symbolism:          “ I inform Munia about the world-famous French sculptor Auguste Rodin’s remark about Nataraja, the lord of dance. Rodin thought of the figure as the finest expression of rhythmic movement. With an immensely beautiful chaste face Shiva is represented in this pose as a four-armed god. The upper right hand holds the small drum called damaru to whose beat the whole cycle of creation and destruction pulsates. The lower right hand is held in abhaya mudra, a gesture promising freedom from fear and blessings. The upper left arm is stretched across the torso and hangs limply on the right of the figure. The lower left arm is raised and often holds a flame. The bent right leg is crushing the demon of ignorance, while the bent left leg is raised and held across the body to the right. The precarious balance is handled with excellent poise. This is a common dance pose seen in south Indian classical forms.”

[Tailor, a panel from the Haripura Posters by Nandalal Bose]

And Munia begins to understand how the dancing figure is an important pose in south Indian art. Indeed, the development of art is deeply related to the evolution of history. Bronze sculpture reached
superb artistic heights under the Cholas. Munia comes to know that the Chola kings were Saivites, followers of Shiva, and they were great patron of the arts. None can restrain Munia’s curiosity. History evolves, and  she feels the beauty of a Mughal miniature (Birth of a Prince) which was possibly painted by one of the most eminent painters of Jahangir’s court, Bishndas.  In a way, it offers a ‘fascinating blend of naturalism and stylisation’. Ella makes it possible for Munia to see its minute details:

“Within the harem walls the queen has  given birth to a prince. She is being shown her baby. Outside, a very senior royal lady sits with her servants, guards, musicians and women of the harem. The harem door, hidden by a curtain is festooned with flowers and leaves just like Indian homes on auspicious occasions. Outside the harem precincts, some men sit casting horoscopes. Other men bring trays of gifts.”

How wonderful it would be if every child sees the world with Munia’s eyes, and finds a mentor like Ella. No wonder, this journey takes Munia to modern times; she is now exposed to the artistic creations of Raja Ravi Verma (1848-1906) and Abanindranath Tagore  (1871-1951). She comes to know about Verma’s  genius—from his famous oil portraits of royal families to his religious and mythological paintings, his ability to unite the European style and Indian sensibilities. Likewise, Munia is told about Abanindranath’s Bharat Mata—how a secular figure of a woman was painted like a Hindu deity, and instead of the divine attributes, she carried in four hands ‘the emblems of the common man’s dreams—sheaves of corn representing freedom from hunger, a piece of cloth representing clothes for all, a manuscript for knowledge and rudraksha beads for spiritual experience’.

[ Birth of a prince, a Mughal miniature, painted by Bishndas]

It is obvious that Munia would be told about Nandalal Bose (1882-1966) who joined Kala Bhavan in Santinekatan in 1920 in response to an invitation by Rabindranath Tagore. Even Mahatma Gandhi realized his talent. In 1938 Gandhi invited Nandalal to decorate the Congress pavilion at the Haripura session.  In fact, Haripura paintings and posters symbolized the aspirations of new India which were embodied in the philosophies of Gandhi ad Tagore. Ella informs Munia:

“The paintings portrayed people in their daily pursuits as well as animals and birds. They were done with great zest in an animated, free-flowing style. …The paintings showed a cobbler, a tailor, a carpenter, a mother bathing her child, a drummer, a pair of shahnaiwallas and so on.”

Nandalal was a gifted teacher. His students too made a difference in the domain of artistic creation. One of them was Ramkinkar Baij. In 1938 Ramkinkar created a large public sculpture called Santhal Family. See the beauty of this piece which is seen as a landmark in the history of Indian art:
“Made of cement mixed with gravel, it shows a monumentally built family group complete with a dog moving with all their belongings to another place. …Here Ramkinkar bridges tradition and modernity. While he retains the modern touch in the movement and texture, in the spirit of robust figuration, he harks back to the noble beauty of classical sculptures.”

A book of this kind is immensely inspiring. It is sad that we are creating a generation of students who would possibly read nothing except textbooks and guide books (and these days some sort of internet material) for all sorts of examinations; and it is really pathetic that we are encouraging a generation of learners who, because of their obsessive preoccupation with utility and success, would seldom develop a way of seeing and appreciating the finest aspects of human creation. And it is ironic that schools, because of the burden of ‘legitimate curriculum’, would always experience the absence of time for a life-affirming creative endeavour.  Under these circumstances, a book of this kind arouses hope. Munia grows with art and its symbolism. The Dancing Girl opens her eyes; the dance of

Nataraja makes her wonder; and Nandalal Bose takes her to the days of Gandhi and Tagore. Munia realizes the significance of art.

And this is important. Because life is not just about being ‘clever’ and ‘smart’; it fulfills itself in the magical touch of an artist’s fingers, in the pain, dedication, perseverance and noble aspiration of a painter or a sculptor.
—       The Editorial Team