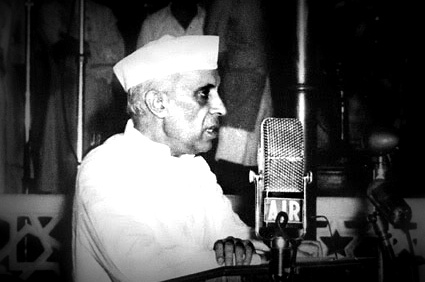 Where Does the Bharat Mata Exist?

Bharat Mata is a beautiful symbol. But then, like many other rituals we tend to miss its deeper meaning, and reduce it into a fetish. At a time when this symbol is invoked time and again for diverse political purposes, The New Leam recalls Jawaharlal Nehru’s interpretation of this symbol, and raises a debate on nationalism and our collective welfare.

“ Sometimes as I reached a gathering, a great roar of welcome would greet me: Bharat Mata ki Jai—‘Victory of Mother India.’ I would ask them unexpectedly what was meant by that cry,who was this Bharat Mata, Mother India, whose victory they wanted? My question would amuse them and surprise them, and then, not knowing exactly what to answer, they would look at each other and at me. I persisted in my questioning. At last a vigorous Jat , wedded to the soil from immemorial generations, would say that it was the dharti, the good earth of India, that they meant. What earth?  Their particular village patch, or all the patches in the district or province, or in the whole of India? And so question and answer went on, till they would ask me impatiently to tell them all about it.
I would endeavor to do so and explain that India was all this that they had thought, but it was much more. The mountains and the rivers of India, and the forests and the broad fields, which gave us food, were all dear to us, but what counted ultimately were the people of India, people like them and me, who were spread all over this vast land. Bharat Mata, Mother India was essentially these millions of people, and victory to her meant victory to these people. You are parts of this Bharat Mata, I told them, you are in a manner yourselves Bharat Mata, and as this idea slowly soaked into their brains, their eyes would light up as if they had made a great discovery.”

–  Jawaharlal Nehru, The Discovery of India

Yes, Nehru’s penetrating insights—or his ability to communicate with people—help us to go deeper into the meaning of a symbol like Bharat Mata. And how important it is to be reminded of this, particularly when in the name of Bharat Mata some of us generate hatred, become intolerant, and reduce nationalism into some sort of mob mentality—military war against our ‘enemies’. As a result, the real concerns—poverty and malnutrition, homelessness and inequality, corruption and everyday aggression—are forgotten, and we tend to believe in an illusion that our Bharat Mata would feel really happy only if we defeat Pakistan in the cricket match, or convey a message to the ‘enemy’ state that you cannot divide India! See its devastating consequences. We live amidst mega scams and corruption; but seldom does the political class regard it as anti-national, or as a conspiracy against Bharat Mata. Instead, we are never tired of sending the dissenters who are fighting against these pathologies to our prisons. Who is a true child of Bharat Mata—an industrialist, a defaulter looting public money, feeling proud of leading a ‘grand life’ and escaping  the country, despite Indian state’s ‘mighty’ power; or a young university student reminding us of what Nehru was trying to convey—nationalism means well being of ordinary Indians, nationalism is freedom from hunger, oppression, violence, and nationalism is not merely about ‘territorial unity’, it means the unity of people, and it emanates from the ethos of care, love, trust, not from the state’s surveillance machinery?

It is high time we began to raise these questions. And this is precisely the task of educators. At a time when television-induced propaganda machinery and impulsive loud politics are making us incapable of appreciating clear vision, and the ability to distinguish truth from falsehood, the educational challenge acquires a new meaning.  The New Leam believes that education has to play a key role in nurturing a generation that can truly become the loving children of what Nehru regarded as Bharat Mata—the children who realize this dharti, this physical territory makes no sense if people inhabiting the territory—farmers and peasants, believers and atheists, workers and students, women and men—remain unhappy because of poverty, corruption, insecurity, marginalization and everyday violence. Let real/living people—their happiness— become more important than any fetish.

We want our readers to respond to the emergent debate on nationalism, and write to us at   which we intend to publish in the forthcoming issues of the magazine.
This article is published in The New Leam, April Issue( Vol.2  No.11) and available in print version.

Evolving A Liberation Theology Within A Firmly Secular Framework

New Political Trends: A Reflection on the Lok Sabha Elections