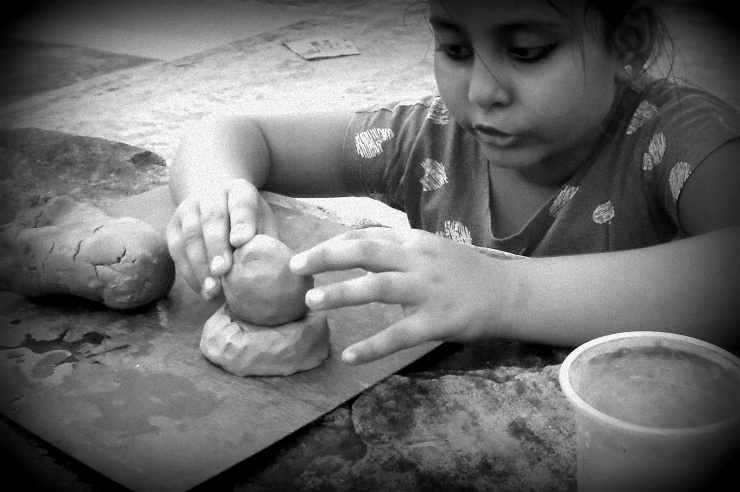 Tinkering Lab is an innovative experiment that trusts the creativity of the child and believes in experiential learning. Here is an account that reveals the possibility of pedagogic innovation.

“Ensure inclusive and equitable quality education and promote lifelong learning opportunities for all” is one of the listed SDGs[i]. I extract two important concerns “Quality education” and “for all”.

Many of the interventions are catering to “for all” concern which increases the possibility of getting opportunity to enroll in schools. I also see noteworthy role of schools in  design in the pedagogy for achieving the “for all” concern.

Let us peep in to second concern “Quality Education”: Expanded definition of quality set out the desirable characteristics of learners (healthy, motivated students), processes (competent teachers using active pedagogies), content (relevant curricula) and systems (good governance and equitable resource allocation)[ii]. For me ‘quality education’ relates directly with the ‘learning processes’ and not many models are coming up to respond to the issue “Quality education”.

Before moving ahead I would like to share few observations about children from my book “School for my child”[iii]  to illustrate ‘how children learn?’

Children can communicate in their mother tongue when they are 3-4 years old, yet empirical observations reveal that most students in primary schools cannot read the basic text even after spending 4-5 years in school. I would like to share my insights and experiences into language acquisition and point to the need for reviewing current classroom practices in language education.

Children are naturally creative and have an unfathomable capacity to learn. The ways in which they learn are more varied and complex than we imagine. Let’s take the example of a four-year-old child who learns her mother tongue. If her mother tongue is English I don’t think she would make any mistake in pronouncing the alphabets ‘D’ and ‘T’ and distinguishing between the two sounds. She is unlikely to say ‘tate’ instead of ‘date’, or ‘dalk’ instead of ‘talk’. No child would be able to explain how exactly he/she has twisted his/her tongue to pronounce these alphabets with the precise difference. No one has taught tongue twisting to make appropriate sound to the child. This self-learning is true across languages. The child understands this complex system of sounds and how to produce them without being taught.

Children ‘play and experiment’ with language in their attempt to communicate and learn. I remember an experiment my daughter made when she was 4-5 years old. She had a ball and wanted to play catch with me. “Papa, main phenkungi aap kechna,” she said (Papa, I’ll throw, you catch). Her use of the word ‘kechna’ took me by surprise. It was her creation, a mixture of the English ‘catch’ (pronounced kech) and the Hindi ‘na’, a suffix. We speak Hindi at home,  so English is not a language she’s familiar with. She must have heard the word ‘catch’ in a conversation or a film and understood its meaning. She was familiar with verbs like ‘doudna’ (running),‘koodna’ (jumping), ‘khelna’ (playing), ‘rona’ (crying) and ‘nachna’ (dancing). She figured out how and where to use ‘na’ and constructed the new word by adding the suffix to the verb ‘kech’. Top of all that, I salute to her conviction that she had figured out a suitable situation and used the word without hesitation and not for the sake of experiment but she actually wanted me to understand the game and want me to play with her.

Research suggests that children behave like scientists[iv]. Piaget has suggested that children construct knowledge[v]. We have many such fundamental insights from researches, but by and large schools still running on old path as if learning is a passive process[vi].

The question emerges  in my mind “Can we evolve a system for schools in which each child can have her way of doing things and learning at her pace and interest?”

I propose a model of Natural and Autonomous Learning

An analogy – The symbol on the left shows that just by placing uniform squares at different angles while keeping the same centre, a perfect circle emerges. The focus is on the centre and the squares and not on how the circle forms. All stakeholders of education – Children, parents, teachers and education authorities should focus on creating a centre i.e. happiness

I am developing a setup named Tinkering-LAB [T-LAB] which is based on this principle. T-LAB is a resource hub with variety of tools, books, collection of activities and an ever growing repository of materials. Children are encouraged to pursue their own ideas, interests and questions freely.

T-LAB is a space for ‘doing’ academics[vii]. Children work on their own ideas and never waste a moment. T-LAB in effect encourages an individual and personalized syllabus and it complements the textual academics with the idea of ‘doing’ academics.

T-LAB is fun. The children say so and we have worked to keep it so.

Children are free to work at their own pace and as per their interests. When children themselves work on their own ideas they never waste a single moment. They enjoy doing things. Learning then happens naturally in the process as well as by completion of the activity

We believe to be patient and allowing the children to work on their own. The facilitation may involve asking questions to challenge, while influence and handhold in some cases.

Facilitators are trained in the concept of effective facilitation who

{Each child decides her own list of things to do and her own way of doing things. T-LAB in effect works on an individual and personalized syllabus and complements the ‘textual’ academics from the school with the concept of ‘doing’ academics. The successes and failures add on to the gradual learning process and attaining different competencies and their levels. We believe it to be Experiential Learning

Students in a typical session at the T-Labs space decide projects of their choice, work on the project using materials they require from the lab, and make presentations to their peers at the end of the process.

A visitor to the T-Labs space, Anish Mokashi[x], (a faculty member at Indian Institute of Science, Bengaluru) had described his experience:

The children’s sense of camaraderie along with the teasing and joking around during the presentations reflected the sheer joy that they derive from the T-Labs space. The anxiety-free atmosphere, the seriousness and sincerity with which everyone pursues their work and the democratic nature of the space really struck me as unique. The space is truly a “Tinkering Lab” where doing things with your hands, making mistakes, learning from them and trying out new ideas is supported. It is a living testimony of what can be achieved when grown-ups show respect and trust in the genuineness of children’s efforts.

Few clippings of doing academics from the T-LAB newsletter[xi]

I would   end the article with Ivan Illich wrote in  his book De-schooling society[xii]:

“The pupil is ‘schooled’ to confuse teaching with learning, grade advancement with education, a diploma with competence, and fluency with the ability to say something new. His imagination is ‘schooled’ to accept service in place of value. Medical treatment is mistaken for health care, social work for the improvement of community life, police protection for safety, military poise for national security, the rat race for productive work.”

Paramod Mailthil contributed to the conceptualization and implementation work of three well-known organizations in the past 16-17 years by participating in educational research with Eklavya, MP in two stints and teaching Science and Math at the Sahayadri School (KFI), Pune. I started an innovative school at Bhopal named Anand Niketan Democratic School (ANDS). After three successful years, I have documented my learning journey in a book named “School for My Child” published by Partridge (Penguin Random House Company) in July 2015. This book is about my experiments in education and my direct experience with children.

[1] Book “School for My Child”by Pramod Maithil, published by Partridge India in 2015

[1] “Under achieving School” by John holt re-published by Eklavya

[1] ‘Doing’ Academics – I have creatively use language to stress that “doing” does have role in learning “academics”. “Doing” or hands on activities complements theoretical learning.  “Individual and personalized syllabus” I mean by this that every child does different thing in the tinkering LAB.