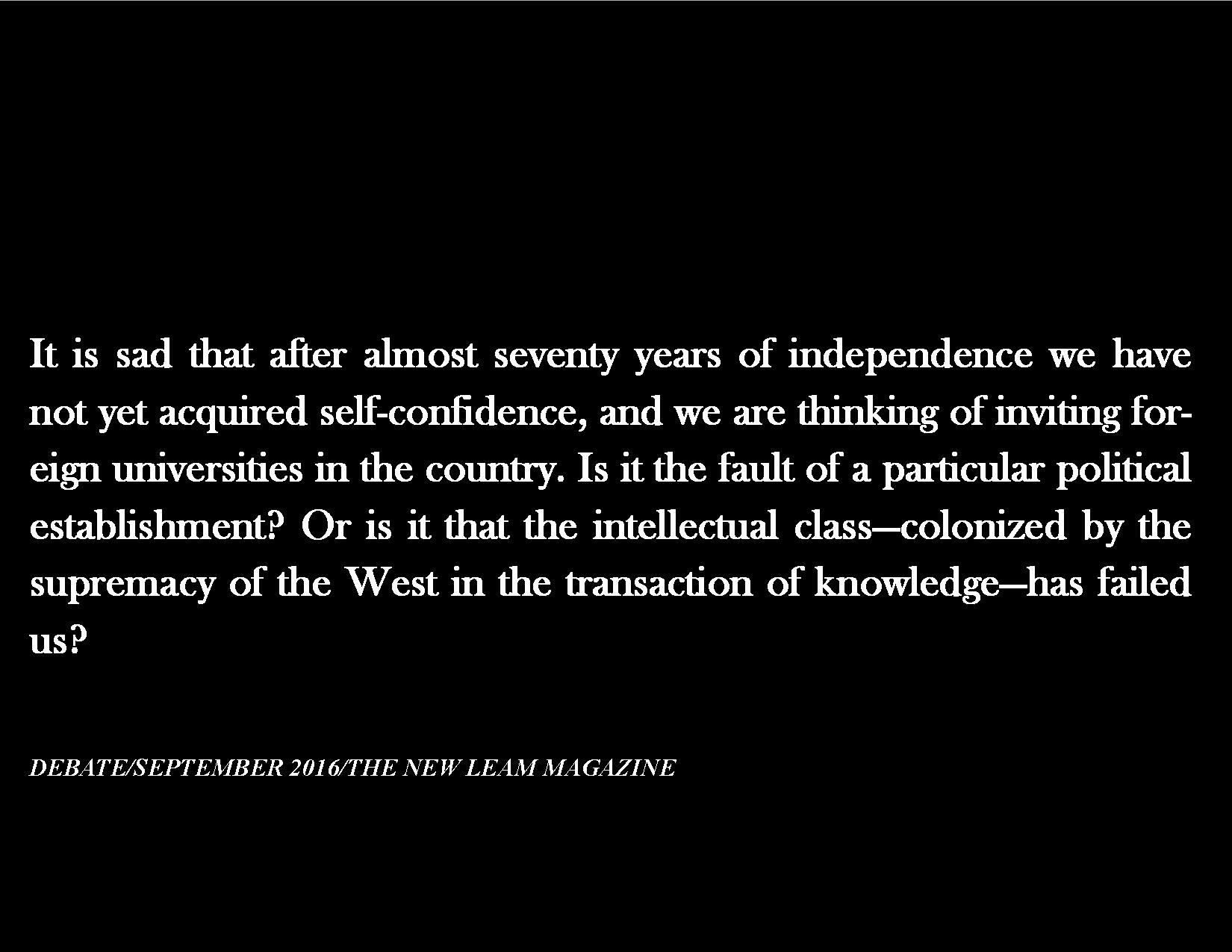 It is true that knowledge knows no boundaries and borders. And great ideas transcend the places of their origin, and shape human consciousness all over the world. It is absurd to possess Newton and Shakespeare, Tagore and Gandhi. In fact, the absence of openness, inclusiveness and cosmopolitanism causes some sort of chauvinism—a rigid, orthodox or ‘fundamentalist’ mind.  However, the problem arises when, because of uneven power relations, the flow of ideas gets restricted, and a particular mode of thinking acquires a hegemonic status and suppresses alternative philosophies, thoughts and knowledge systems.  For instance, a careful student of colonialism (the likes of Edward Said and Ashis Nandy would help us in this regard) would concede that it conquered the colonies with its own politics of knowledge: modern West with its Enlightenment  philosophies, discourses of scientific reasoning and empiricism, and notions of progress  sought to project itself as the ultimate source of knowledge. Its impact was tremendous. All of us in this part of the world who have passed through the experience of being colonized continue to retain the supremacy of the West, and undermine our own traditions and knowledge traditions. Even though we live in a ‘free’ country, it is difficult to see self-confidence and dignity amongst Indian intellectuals. Almost for everything, be it science or philosophy, sociology or literature, we remain pathologically dependent on the West—its texts, its idioms and discourses, its centers for learning, its journals, its certification. It is not uncommon to see that a Ph.D. student working on the adivasis of Madhya Pradesh prefers to get herself enrolled in a Western university. Or a leading political theorist chooses an American university to write a book on Bengali novelist Bankim Chandra Chattopadhyay.  We normalize it; we encourage it; we take it for granted. Is it the reason that after seventy years of independence we have not yet acquired the confidence to trust ourselves, our own institutions, and we have to invite foreign universities in the country?  You cannot blame a particular government for this sorry state of affairs. What about our Marxist professors, our subaltern thinkers, our postcolonial theorists? Even for them, every insider knows, Harvard or Cambridge (otherwise any third rate Euro-American University) remains the ultimate salvation site. This is indeed a vicious circle. As we fail to trust ourselves, our institutions, learning centers and universities have begun to decay; and then we lament that we don’t have quality journals, good research environment etc. But how is it possible to have our own good journals if we ourselves do not wish to write in our journals?  How do we generate confidence in young minds if our professors continue to tell them that there is nothing in our knowledge traditions we can be proud of?

See its devastating consequences.  It is not impossible to find otherwise bright students and scholars who know nothing about the Upanishads—the subtle dialogue on the nature of Self and the ultimate reality. A student of social science and philosophy may tell you everything about Bacon, Descartes and Popper; but he/she may not have heard of Gautama’s Naya—a profound ancient text on logic and reasoning. Likewise, while our scholars critique modernity (for many of them, this is the postmodern fashion) they quote frequently from Habermas and Lyotard, Foucault and Bauman; but generally they are not so enthusiastic about Gandhi, Tagore, Sri Aurobindo and  Anand Coomaraswamy. These days we see yet another trend. In the field of literature those who write in English (recall their privileged location in the West, the game and widespread network of market of international publication houses and lavish book release functions as spectacles)—Salman Rushdie, Amitabh Ghosh, Jhumpa Lahiri—acquire iconic status, while many of us, particularly, English speaking liberal intellectuals—remain ignorant of the literary creations in Hindi or Kannada or Bengali or Urdu.  While there are Montessori schools in every town of the country, seldom does one see a Gijubhai Badheka school.

This is not to suggest that we should not learn the ideas emanating from the West. Didn’t Gandhi learn from Ruskin, Tolstoy and Emmerson? Didn’t Phule learn from Thomas Paine? Didn’t Tagore invite the scholars from all over the world at Santiniketan?  As we have already suggested, great ideas have the capacity to transcend boundaries, and localism is an obstacle to human growth. The economist Schumacher (Small is Beautiful—what a book!) learned a great deal from Buddha and Gandhi. And the literary genius Herman Hesse was fascinated by prince Siddhartha—his quest for the meaning of existence.  In fact, we are suggesting something deeper.  We are talking about the dialogic exchange of ideas. Dialogue is anti-colonial; dialogue is not ethnocentric. It is sad that many of our liberal/secular intellectuals have missed this emancipatory spirit of dialogue; instead, they have always feared tradition, dissociated themselves almost completely from our own intellectual traditions, and as a result, allowed the zealots to appropriate and falsify the extraordinarily treasure of knowledge in our epics, philosophic schools of thought, in literature, music, art. It has to be realized that without self- dignity, clarity and confidence (and believe it, fundamentalists have no self –confidence; they are anti-dialogic; their violence emanates from their inherent insecurity) we cannot become active creators. For how long will our intellectuals exist as passive beggars borrowing the ideas emanating from their Euro-American masters?  Somehow we have to confront this question. Because this is the ultimate pedagogic question.

We invite our readers to participate in this debate and share their views with us to thenewleam@gmail.com