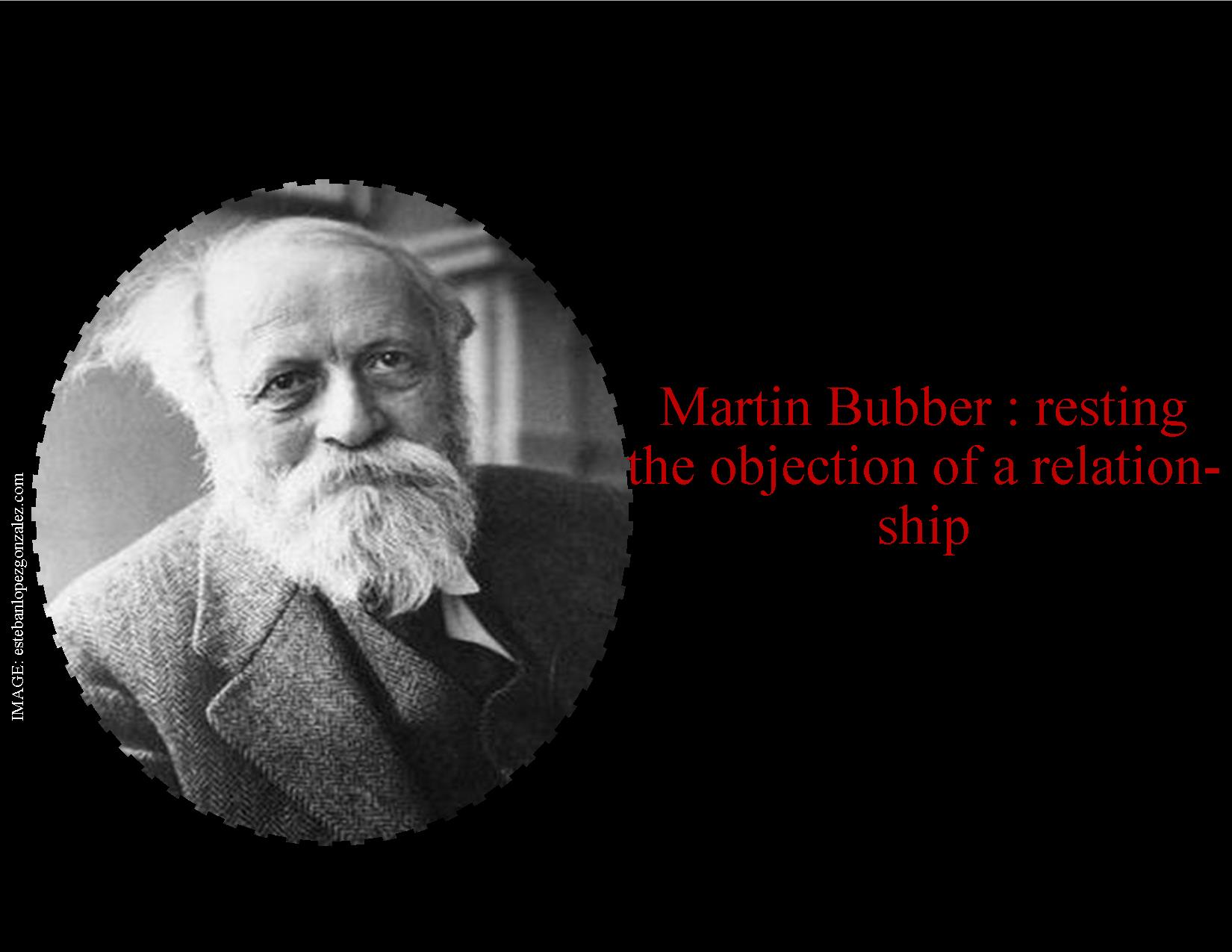 Martin Bubber was an Austrian born philosopher. He is best known for his works on the philosophy of dialogue-a form of existentialism that is based upon the distinction between the  I–Thou relationship. Buber’s creative genius was commendable and he wrote several insightful pieces. His poetic and influential book I and Thou is about the difference between two types of relations between people. In one model, which he calls “I-It,” one relates to others as members of categories or as instruments of achievement. In the other, “I-Thou” , one relates with the entirety of one’s being to another whole person. For Bubber, this is far more important than a way of relating to others; it is also how we can gradually experience God’s presence in the world around us. Here is an excerpt-

When I confront a human being as my You and speak the basic word I-You to him, then he is no thing among things nor does he consist of things.

He is no longer He or She, limited by other He’s and She’s, a dot in the world grid of space and time, nor a condition that can be experienced and described, a loose bundle of named qualities. Neighbour- less and seamless, he is You and fills the firmament. Not as if there were nothing but he; but everything else lives in his light.

Even as a melody is not composed of tones, nor a verse of words, nor a statue of lines–one must pull and tear to turn a unity into a multiplicity–so it is with the human being to whom I say You. I can abstract from him the color of his hair or the color of his speech or the color of his graciousness; I have to do this again and again; but immediately he is no longer You. The You encounters me by grace–it cannot be found by seeking. But that I speak the basic word to it is a deed of my whole being, is my essential deed.

The You encounters me. But I enter into a direct relationship to it. Thus the relationship is election and electing, passive and active at once: An action of the whole being must approach passivity, for it does away with all partial actions and thus with any sense of action, which always depends on limited exertions.

The I of the basic word I-It appears as an ego and becomes conscious of itself as a subject (of experience and use).
The I of the basic word I-You appears as a person and becomes conscious of itself as subjectivity (without any dependent genitive–i.e., without any “of” clause).Egos appear by setting themselves apart from other egos. Persons appear by entering into relation to other persons.
One is the spiritual form of natural differentiation, the other that of natural association. The purpose of setting oneself apart is to experience and use, and the purpose of that is “living”–which means dying one human life long.

The purpose of relation is the relation itself–touching the You. For as soon as we touch a You, we are touched by a breath of eternal life. Extended, the lines of relationships intersect in the eternal You. Every single You is a glimpse of that. Through every single You the basic word addresses the eternal You. The mediatorship of the You of all beings accounts for the fullness of our relationships to them–and for the lack of fulfilment. The innate You is actualized each time without ever being perfected. It attains perfection solely in the immediate relationship to the You that in accordance with its nature cannot become an It.

Men have addressed their eternal You by many names. When they sang of what they had thus named, they still meant You: the first myths were hymns of praise. Then the names entered into the It-language; men felt impelled more and more to think of and to talk about their eternal You as an It. But all names of God remain hallowed because they have been used not only to speak of God but also to speak to him.

Some would deny any legitimate use of the word God because it has been misused so much. Certainly it is the most burdened of all human words. Precisely for that reason it is the most imperishable and unavoidable. And how much weight has all erroneous talk about God’s nature and works (although there never has been nor can be any such talk that is not erroneous) compared with the one truth that all men who have addressed God really meant him? For whoever pronounces the word God and really means You, addresses, no matter what his delusion, the true You of his life that cannot be restricted by any other and to whom he stands in a relationship that includes all others. But whoever abhors the name and fancies that he is godless–when he addresses with his whole devoted being the You of his life that cannot be restricted by any other, he addresses God.

Source: Martin Bubber, I and Thou

On Solitude and the Grace of Simple Living