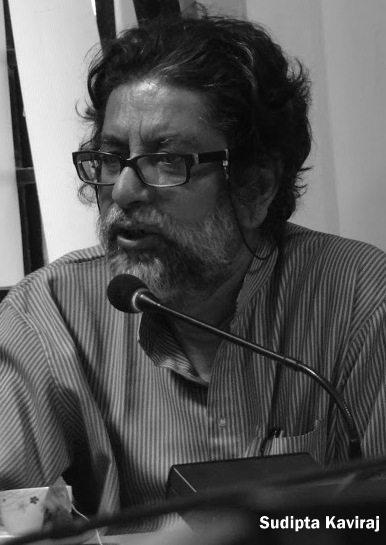 Not everyone adores modernity—its urbanization, its anonymity, its implicit denaturalization. Quite often modern cities symbolize these discontents of modernity—reckless speed and heartless calculative rationality.  With profound aesthetic sensibilities great poets depict this psychic/cultural landscape of modern cities. Sudipta Kaviraj—a distinguished political theorist—has chosen to engage with three noted Bengali poets—Rabindranath Tagore, Jibanananda Das and Samar Sen, and capture their perceptions of Calcutta: a city they experienced. In this small note we see a wonderful interplay of political philosophy and literary criticism.

Tagore’s relation with the city was predominantly of aesthetic rejection. In his mature works, on many occasions, writing about the city in his poetry, he tries to show that the city cannot find a poetry of its own, because the city in its sordidness does not deserve poetry. His poems are therefore written with their back turned on the city they are talking about: their dominant urge is one of escape into nature, into the countryside, less frequently into a highly coloured romantic past. He is capable of writing wonderful poetry about the hazy cities of the past in which Kalidas’s heroines lived their lives, of a wonderfully mythical Ujjaini; but Calcutta was undeserving and incapable of a lyrical celebration itself.

In poetry after Tagore, several highly talented poets continued this tone of negative reflection on the city, but with one highly significant difference. In Tagore, escapes from this city were primarily of three types—into imagination and dreams, into the unspoilt nature of the countryside, and into nostalgia. The new poets of the 1940s cut off all these routes of escape. They consequently forced the reading public to face the dirt and meaninglessness of the city quite squarely—not as a passing phase, not as a small part of a larger green, beautiful world, but as the undeniable, inescapable present, as the only world there is.

This sense of a claustrophobic space gradually finds two types of poetic enunciation. The more aesthetically sophisticated presentation of this new aesthetic of the city came in the wonderfully colourful imagery of despair in Jibanananda Das, whose visual sensibility constantly prowls the city, specially at night when it is deserted and exhausted, when the crowds have disappeared, when the city gives up, in a sense, its vast, dark, despairing truth. Das’s poetry is an aesthetic wonder, because his weaving of words makes this despondent nightmare as beautiful as dreams. . But despite everything, despite the immensely exciting craft, the amazing surprise of his imagery, the subtle, tired cadence of the understated metre, the city remains a space of despair. The present, the immediate, is entirely enclosed in the claustrophobic space of Calcutta with its subtle and ineradicable curse, where everything beautiful is transient, awaiting decomposition and death. Death, decay, the corpse eaten by birds of prey, is a constant theme in Jibanananda, as in the other famous image in his poetry—deer playing in a forest clearing in the improbably bright light of stars; but these deer are destined for slaughter; what eventually ends the idyll is the sharp, final shot of a rifle shot ranging through the enchanted night.

A second strand of poetic reflection on the city developed alongside this one, animated by a powerful induction of communist ideology into Bengali culture.  But the communist poets’ sense of the city is not very different from the gloomy despair of Jibanananda. To take a characteristic example, Samar Sen, an acclaimed young leftist poet in the 1950s, saw the city very similarly—as a space of inevitable unfulfilment. Women, still carriers of a remembered beauty in Jibanananda, become simply objects of lust; in Sen’s poetry the space of Calcutta is surprisingly teeming with prostitutes. Some of Sen’s lines show the working of the social sensibility behind this aesthetic with exceptional clarity: the figure of the ganika , the woman who can be bought, returns endlessly to haunt the poetic imagination, in the final travesty of love—she ‘loves’ him for the precise minutes for which the price has been paid. Samar Sen’s poetry is also admirably explicit about the subject of this poetic enunciation and this sense of the city: this is the madhyabitta, the highly educated lower-middle class male who is equipped with a cultural sensibility and can never find fulfillment in Calcutta’s economic and social world.

This article is published in The New Leam, JANUARY 2017 Issue( Vol .3  No.19) and available in print version. To buy contact us or write at  thenewleam@gmail.com