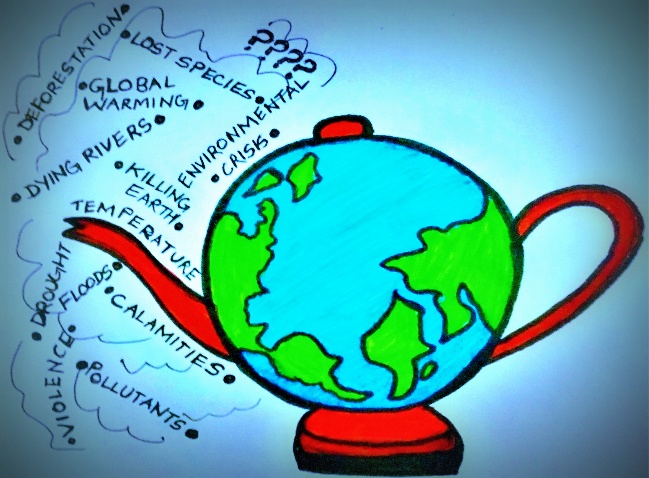 OUR EARTH: A BURNING TEAPOT

Amidst the many challenges that humanity faces one of the most serious ones is the global environmental crisis. The discourse has often involved passing on the buck but are we prepared to rethink our own life choices, to contemplate and ask those uncomfortable questions?

By Editorial Team/ The New Leam

Today the world is faced with a very serious environmental crisis. Amongst the many issues that we face the key environmental problems include air pollution, the destruction of the ozone layer, vast quantities of toxic waste, massive levels of soil erosion, the possible exhaustion of key natural resources such as oil and coal, and the extinction of plants and animals on a scale not seen since the extinction of the dinosaurs 60 million years ago.

The paradox however is that although we witness destruction and devastation at such a large scale we are not taking adequate individual and institutional mechanisms to handle the intensity of the problem. This crisis not only deprives us of the right to clean and healthy environment at the present but is also certain to have catastrophic effects on the future of the earth. It is indeed an irony that the alarming statistics that arise of environmental degradation from across the planet have not yet left an impact on us which compels us to rethink our actions in the world.  In fact, when we look around ourselves it is not very difficult to witness the negative effects of the crisis evident in the form of growing deserts, natural calamities, rise in global temperatures, advent of many fatal diseases and the loss of plant and animal species at an unprecedented scale.

What Lead to the Crisis?

The answer to this complex question is also quite complex. However in our academic circuits, environmental forums and concerned citizens clubs we tend to always put the entire blame for the crisis on the ‘other’. This leaves little scope for us to rethink our own everyday practices that may lead to environmental degradation even if on a small scale. We cannot altogether free ourselves from this blame and when we do that we look at the problem only partially.

The environmentalists blame the crisis on modern machine production. Many hazardous and environmentally destructive modes of technology and substances (for example, coal power stations, non-degradable plastics which are not biodegradable) do cause great damage to the environment and with due will and planning can be replaced by safer and sustainable industrial technologies (for example, solar technology, starch-based plastics, bio-gas plants etc.).

As citizens of the modern world we find it hard if not impossible to conceive of our own lives without technology and other amenities. But is it possible for us to reduce the level of consumption so that we may arrive at a more sustainable relation with nature? Our smartphones, laptops, internet , cars, air-conditioners and other appliances have become so intrinsic to our existence that we find it difficult to live independently and do we realise how much power, electricity they also consume if we continue to use them for an entire lifetime for almost twenty four hours a day? A kindle may save trees but does it save electricity which is equally precious as it arises from the burning of many natural resources that are non-renewable or from a dam that was built when a river was sacrificed? It is time that we rethought our own life patterns and contemplated on the crisis in a holistic manner.

Today most people change their phones, computers and cars at least once a year; imagine what happens to the gallons of metal and plastic that are left at disposal?

In fact, many new sustainable resources have been developed which are safe and can be seen as alternative technologies, which can replace environmentally destructive processes and substances. But there has been a reluctance to make large scale use of these technologies as these will bring forth cuts in the profits of the industrial sector. The global market also prefers to leave ordinary people to live in circumstances of environmental degradation and pollution. The promotion of private cars instead of public transport which minimizes fuel consumption, the growing urban landscape of large scale housing and malls with excessive consumption of electricity depriving local communities, the construction of mega power projects at the cost of environmental sustainability and so on.  The cause of environmental degradation and damage is thus a mutual task for the industrial sector, the state and the ordinary citizens. The moment we pass the blame on any single party we deny looking at the problem in its inherent complexity and seriousness. It is time we addressed the issue not diplomatically, not politically but with humanity and a sense of responsibility. Are we prepared to ask ourselves some uncomfortable questions?

Single Use Plastic Banned by the European Union: Lessons we Must Learn