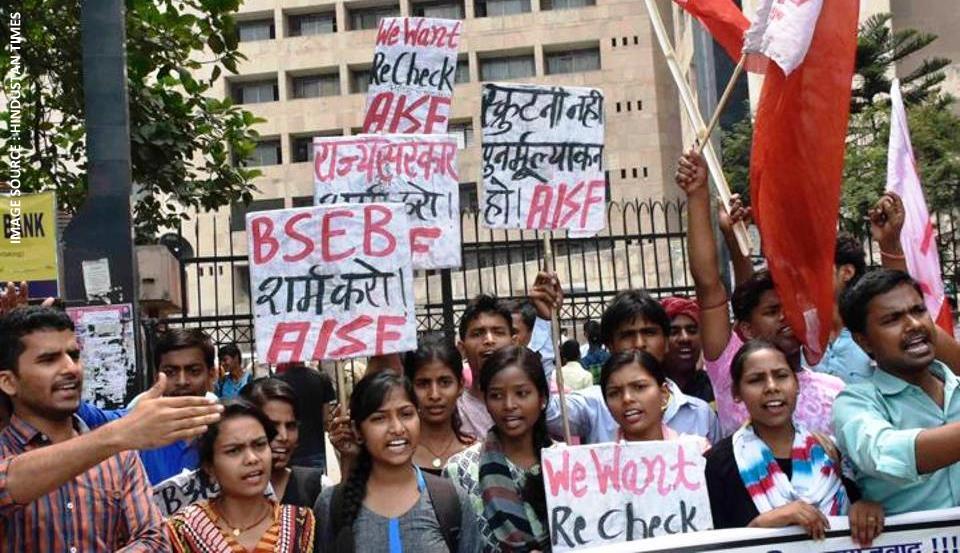 What has failed: Children or the System?

Each year the results of the Board Examinations reveal the poor condition of the Indian education system which fails to live up to the dreams and aspirations of lakhs of young learners. Amidst these constraints, how can an alternative to the paradox of the education system  be formed? Is there any hope or are we walking towards a bleak future?

Nivedita Dwivedi  is currently working with the Reserve Bank of India.

The most striking feature of the above question is the underlying assumption it is based on, which is that the Indian education system is nothing short of a failure. And the sad part is that the implicit assumption in this question cannot be denied, by even the most enthusiastic or optimistic commentator on the Indian education scene. How has the state of affairs come to this? Did the children fail the system or vice-versa?

Before attempting to answer the above question, let us first begin by defining the word ‘failure’ here. Is this term associated with the Indian education scene because our literacy rate is still not hundred percent?

But is the literacy rate of 74.04% not good enough, given the fact that at the time of independence this figure was only 12%? Or maybe the Indian education scenario is described as a failure because as per the ASER report of 2016, although the enrollment level of children in schools is as high as 97%, the learning levels, measured in terms of the 3 R’s, are as dismal as could be, what with only 47.2% of Class V students being able to read Class II textbooks.

While the above may be significant areas of concern, I would like to believe that the association of the term ‘failure’ with the Indian education scene is due to a more fundamental reason than those sighted above. I believe that the Indian education system (and I am deliberately using the word system here, to underscore the point that the failure has been on the part of the system and not children), has mostly been a disaster because it has failed at the very first stage itself, in not visualizing and defining the ‘aims of education’ themselves, very soundly. In giving undue importance to the utilitarian aims of education, the larger goals of education, those that aim at developing a child into a human being who is an apt combination of a considerate heart and a reasoning mind, have been by and large given a miss.

With the aims of education being completely utilitarian in nature, India might today be one of the fastest growing economies of the world, at the same time it continues to struggle with issues like endemic corruption, yawning gaps between the haves and the have-nots, continuing discrimination between individuals based on frivolous grounds and a shaky understanding of social justice and humane considerations. While the growth and development of a considerate heart has thus remained stunted, the same has been replicated in the case of the growth and development of a reasoning mind as well. Thus, while the education system may have succeeded in churning out engineers by the dozen, no significant invention or discovery of any kind has taken birth in the Indian soil of late for it to benefit the world.

The reason that I lay the blame of the above mentioned failures on the shoulders of the system rather than the children is because it is the system that has been designed to fail the children, rather than the other way round. This is the very system that has been modelled on the one designed by the British to help churn out individuals who could be subservient to the Crown in order to help propagate the British rule on the Indian subjects for as long a period as possible. Having been taught to be subservient, docile and of an unquestioning mind for close to two centuries, it probably could not have been very easy to unlearn some of these traits. At the same time, having lived under Brahminical domination since ages, a firm belief in equality of all and the concept of social justice, also may not come naturally.

However, herein lies the utmost failure of the education system that it chose to continue with such a system even after it gained independence, and did-not consider it worthwhile to focus on the development of a mind that believes only in one thing unquestioningly and that is the spirit of enquiry, reasoning and critical thinking, and a heart that does-not tire on the path to social justice and upholding of human values.