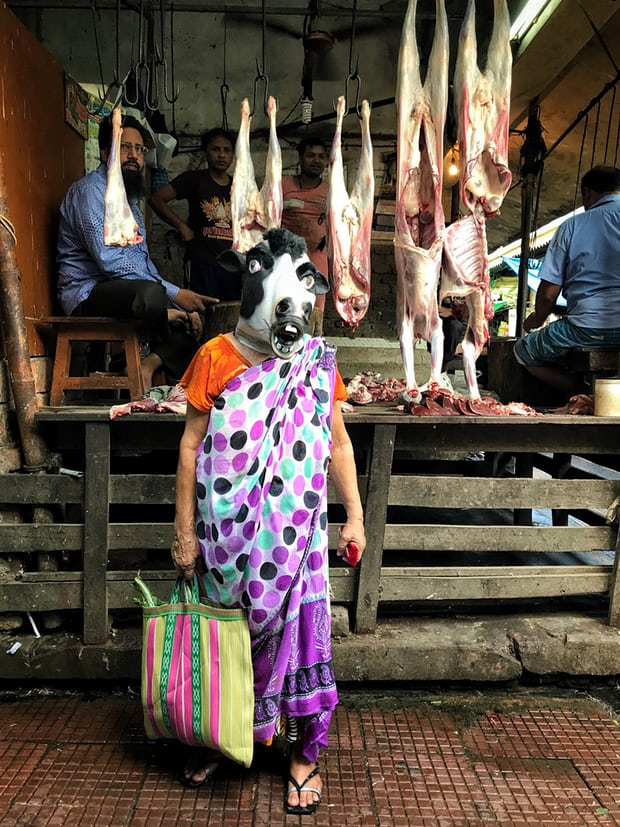 Like Cows women too are ‘slaughtered ‘but ironically the first makes us angry and the second makes us indifferent.

A Kolkata based artist Sujatro Ghosh recently came up with an extremely interesting and thought provoking protest against the violence and indignities afflicted on women in India’s capital in particular and the country in general over the last several decades.
What managed to capture our attention was his idea of coming up with a series of photographs of women engaged in everyday activities from buying meat, dining at a restaurant or simply enjoying a moment of solace while playing the piano but the twist in the tale was that all of these women were depicted wearing cow masks. The artist asks through the exhibition if indeed ‘sacred cattle are safer in the country than women!’

With cow vigilantism on the rise simultaneously with atrocities against women it is indeed an important question worth pondering upon. When people are tortured, killed, ridiculed and even labelled ‘anti-national’ if they consume or are even rumoured to consume a certain meat and seldom do these same people who witness a girl being eve teased, tortured and openly molested raise a voice against it then the artist’s metaphoric and timely critic gains further ground. There is no other reason why in bright day light women in our cosmopolitan cities continue to feel unsafe if not unwanted. The artist’s opportune depiction of the issue is more than a reminder of the pathetic times that we live in and the kind of social values that we cherish. Cows invoke our passions but the safety of women keeps us unaffected and aloof.  Patriarchy with its immensely hierarchical ideology and discrimination has indeed permeated so deeply in our consciousness that women (half of humankind!) are raped, violated and slaughtered by its ugly grasp.

The artist also reminds us how punishment for the mishandling of cows has been made more stringent and those against the violation of women’s right to dignity still continue to be so frequently transgressed. The question that not only the self-proclaimed feminists but also the masses in general need to ask is whether in a land that has begun to hold sacred cattle so dear and mobilise passions against its manhandling can really afford to remain so indifferent and lukewarm to the cause of women’s safety?

If this does not awaken our sense to the dirty reality of our smart cities then the paradox is even clearer, our women are far less important than our cows. If a cow is slaughtered we may kill but a woman may be molested and raped in daylight but we will only see it in the prime time headlines sitting comfortably in our drawing rooms.  Is this really the lands that revered the woman as the mother goddess or have I come in an altogether wrong direction?