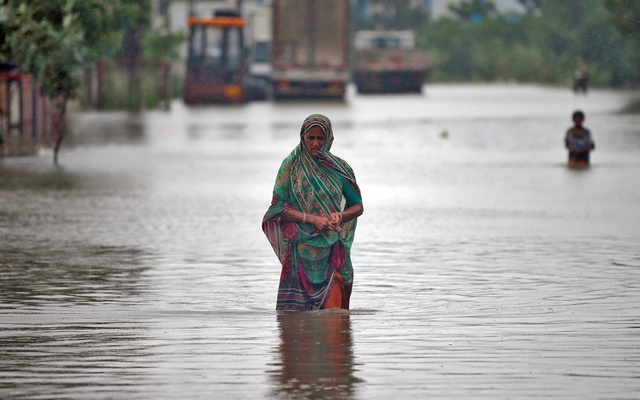 As we discover and rediscover the ruins of an existence that is unsustainable, inequitable and poor we are compelled to ask why death tolls are not just mere statistics and how compensations cannot be our solemn response to tragedy.

Meteorological experts have said on record that the rainfall in Gujarat, close to the heaviest in 112 years, was the result of low-pressure systems developing simultaneously over the Bay of Bengal and the Arabian Sea and thus the recent floods are directly a result of this unprecedented and perpetual rainfall. If one were to follow the trajectory of an India in terms of both its socio-political advancements as well as its natural-geographical conditions one would most certainly know how devastating floods have proven to be year after year for the country.

This perennial concern has remained central to India’s agenda and has continued to haunt the common masses when adequate infrastructural arrangements, the timely intervention of statist authorities is more often than not delayed if not altogether denied. What adds to the grave situation is the fact that the propensity to damage is enhanced by several other factors like weak regulation on building standards, unplanned rural and urban settlements and extreme poverty these factors lead to high levels of risk and damage. A reliable research that was conducted in 2016 revealed how floods were a central risk to communities across India and that nearly 113 million people in the land were overtly exposed to its many dangers.

As the search operation for tracing dead bodies and caught victims goes on after the devastating floods once again hit the western part of the country it becomes abundantly clear how inadequately we are prepared for hazards that so unsparingly impact the lives of the common people. Weeks of torrential rains have meant that the devastation caused and the loss incurred is extensive and even irreconcilable. Helicopters and boats are reaching out to areas including the deluged Banaskantha district where 25 bodies, including 17 members of one family, were discovered in two submerged villages last week. On Sunday, surviving members of the family met the Gujarat chief minister, Vijay Rupani, who is recorded to have said the rainfall had triggered “the worst flood of the century” in parts of the state. It is alarming how about 700 people across the county have died due to floods over the last some weeks. The flooding has made many parts of Gujarat inaccessible and has also resulted in the death of cattle.

In the recent times another state Assam too fell victim to ceaseless rain and resultant floods. In Assam at about 77 people have been killed and a state-wide emergency relief operation has been going on since April. Tens of thousands of hectares of crops have been destroyed and at least 91 animals, including seven rhinoceros, were killed in flooding at the state’s Kaziranaga national park. While relief operations are underway and the compensations in monetary terms for the families of both the diseased and the injured have been announced it is time that we as a nation reflected on some other important issues that have long been either neglected or suppressed.

The first question that we as citizens of the nation ought to ask is why even after 70 long years of independence we are not prepared in terms of infrastructural to handle a natural disaster that occurs without fail every year in one or the other corner of the country?

The second fundamental question that we want you to think about is why death tolls, massive scales of devastation, non-cognizable levels of human destruction and pain- all are reduced into mere numbers/ statistics for consumption available to one constantly on the new screen, in the print media and on social networking sites without having the power to radically transform the way that we think and live our lives as members of a shared collective?  Why have our socialization, our cultural sensibilities and above all our potential for humanitarian concern taken a back seat and made us numb to the agony of the millions all around?

The last and final question that the recent natural disasters have once again compelled us to ask is why we , despite our modern standards of living, high-end degrees from the renowned institutions of the world, our social vigilance in terms of awareness of our rights . Our high standards of living and apparently even higher standards of thinking: we are unable to live sustainably in nature and establish a relationship of mutual coexistence rather that ruthless destruction? Where is it that we have failed as humans and as communities?

The floods in India in the recent weeks have devastated the lives of many common civilians completely and made us face to face with the aggressive impact of unnatural, unsustainable and inequitable relationships within societies in general and with nature in particular. It might be already too late if we still do not ask these important questions.