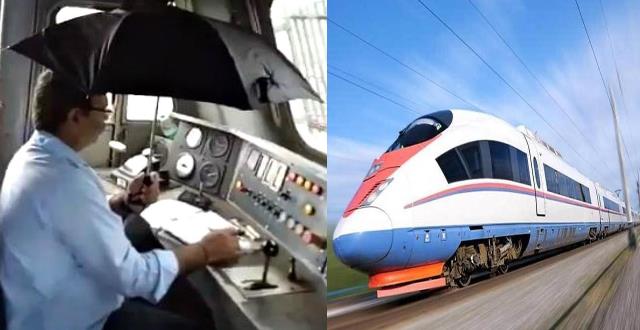 The driver of a train was recent photographed holding an umbrella over his head while driving the train in order to protect himself and the control panel of the train from drenching in the rain due to a leak in the train’s ceiling. Is the dream of ‘smart-cities’ merely a childish fantasy?

For most people the rain means respite from the scorching summer heat and a moment of comforting coolness, but despite their general appreciation for the monsoon people are surely also very much impacted by the after effects of the rains and the myriad problems that it brings along from- traffic blockages, filled potholes, over flooded streets and other issues that make the rainy season as much a menace as a boon. And what makes things worse is when water is steadily dripping down the ceiling and once this begins there certainly is no end to the agony.

After having seen poplar photos of staff wearing helmets at work at both government offices and schools now a new video which shows a train driving holding an umbrella over his head while driving the train is fact gaining popularity.

The footage most clearly shows water leaking from the roof of the train and in order to protect both himself and the control panel of the train from being drenched in the rain the driver is holding an umbrella. Newspapers can be seen spread across the floor to soak up the water. While the driver continues to manage the train despite the obvious distraction caused by the leaking roof of the train, the speaker and the person behind the camera share about their poor condition and misery. He recalls how they have had to face the problem of leakage for many years and especially during the rains they have had to remain extremely cautious. He emphasizes upon the point that there’s “no problem with being alert” but there are lots of discomforts and problem in doing the job.He appeals to all the people watching the video to share it as widely as they can so that it grabs the attention of the concerned authorities and adequate measures are adopted. The video was apparently shot in Jharkhand as the train passed the Bermo station.

It I a great irony that a mode of communication that can be said to be the life line of India, a mode of transportation relied upon by most ordinary people- is being taken so lightly by the authorities. It is a time when we are sending satellites into space, importing the best of international technology, enhancing our military arsenal to emerge as superpower, we are even competing with European first world countries in terms of economic progress and scientific progress- and yet such a simple and crucial infrastructural error can be so widely prevalent in the country. Imagine, how easily and conveniently we are prepared to risk the lives of people who perhaps do not even now that their lives are being put through such extreme danger.  What are after all our priorities as a nation? How long can we go on decorating the walls of the palace when there is not even a morsel of food in the kitchen? These superficial/exhibitionary steps towards economic and technological prosperity will really be of no significant difference to the lives of ordinary citizens if the basic infrastructure of the country be it its communication channels, its healthcare and education are not worked upon. It is time we asked the authorities the vision they have for India and whether it is an India for just the elite or an India that is inclusive and emancipatory?

SC Rules to Save Mumbai’s Aarey: Big Victory for Protestors