While families grieve the loss of over 60 children in the last few days in a major hospital in Gorakhpur the problems of accountability and public infrastructure in the light of electoral democracy come to surface yet again. The point however that we wish to explore is whether temporary assurances are all that citizens deserve in a democracy or is it high time that we contemplated on the significance and moral character of representative politics in India?

The news that is doing the rounds for the last many days is indeed devastating in many ways as it points out not only to the poor condition of basic infrastructure in the country and also to the utter sense of helplessness among the common folk of the country who despite being utterly disillusioned time and again by the governments that they elect continue to remain entrapped in the vicious cycle called parliamentary democracy.

In the past couple of days the tragic and sudden death of over 6o children at a major referral hospital in Uttar Pradesh has caused a massive rupture and upheaval in the conscience of the nation. After the tragedy has occurred and its root cause being utter negligence and lack of basic infrastructural arrangements it is being argued that an incident of this kind was entirely preventable. This will require for an independent inquiry to probe into the incident and find out why children in such alarming numbers died at the BRD Medical College in Gorakhpur between August 7 and 11.  An inquiry of this nature should examine and probe into the matter and also find out if the circulating cause of the incident (the disruption and lack of oxygen supply) could be the reason for the crisis.

In the context of this grave tragedy we must critically question how despite the choices that each citizen is allowed in electoral politics why they are perpetually caught in the cycle of unpromising politics. Why elected governments are not able to win people’s faith by building for them basic health and education facilities and ensuring that these are efficient and functioning in their best conditions.

Even while 70 long years have passed since we became independent why the common people of this country lack the promise of basic safeguards. The case that unfolded before our eyes in Gorakhpur is only representative of the large scale government negligence and lack of will in the nation.  Even in the country’s capital health/ medical facilities in government run hospitals such as AIIMS and Safdarjung is difficult to access, chaotic, disorganized and lack sanitation and cleanliness. One can only imagine the plight of these hospitals and clinics in remote corners of the country when in the capital itself it can be prey to this negligence and lack of government will. The intrusion of the private sector in health in a major way as further denied common people’s access to quality health mechanisms. Thus those who do not have the money must perish! 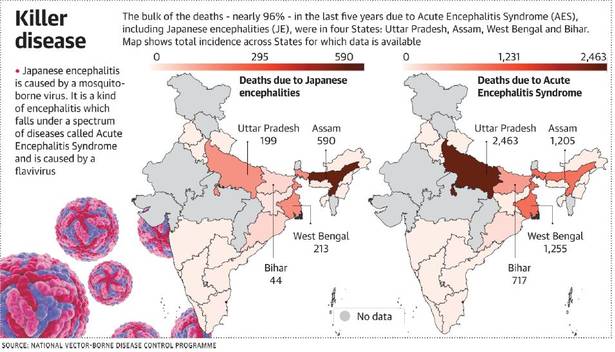 Responding to the grave tragedy the Chief Minister’s immediate assertion was that no deaths took place due to lack of oxygen and this was certainly an inappropriate claim and it could also lead to a prejudiced administrative probe. It is worthy to note that the company that supplied the oxygen had issued notice to the hospital on large unpaid bills, warning them of a future crisis.

It is indeed a big irony that no lessons have so far been learnt by the State government and the Centre and this is evident from the unprecedented annual peaks of disease and death in U.P., particularly in the eastern districts: data show that Japanese encephalitis, which infected many of the children who died last week, has claimed more than 10,000 lives in the State between 1978, the year of the first major outbreak, and 2005. High mortality has been noted in later years too. As a parliamentarian who has been representing Gorakhpur for almost two decades the Chief Minister should have only been too familiar with the epidemics that jolted his constituency for so many years and thus better preparedness was expected of him. While it may be true that the previous governments in the state have done very little to eliminate the cause of this rampant tragedy however this does not mean that the current Chief Minister can be freed of all responsibility.

The tragedy has many lessons for the governments in both Indian states and at the Centre.  It showed us that a mere infection/infrastructural lack can completely disable us and cause such rampant deaths in our hospitals- it also goes on to show that we are so utterly unprepared for the slightest tragedy that we immediately succumb to it.

If our elected leaders and governments only had the required commitment and will can they quickly and efficiently build basic health infrastructure in their own regions;all that this will require is the strong determination and a will. If one were to look at the situation in the state of U.P., the epidemics have their roots not only in the unpreparedness of health systems but also in weak social determinants such as housing and sanitation and with problems of water and air associated with ecological changes. Encephalitis is intrinsically related to the expansion of irrigation and the construction of dams four decades ago, resulting in an unprecedented increase in disease-transmitting mosquitoes. Moreover habitation that is in close proximity to pigs and birds have accentuated viral transmission pathways. The Centre has a vaccination programme and has stated commitment to build pediatric intensive care units in priority districts, but these have not had adequate impact yet.

When a certain tragedy strikes there is indeed the need to take immediate steps to curb it and ensure that it does not occur in the times to come and thus  the immediate way forward would be for the Indian Council of Medical Research to set up a special commission for U.P., dealing with it as a public health emergency. It is also an appropriate moment for the Centre and the States to consider their poor record and be accountable to people who vote for them as part of popular democratic practice.

Such a basic infrastructural system should be non-commercial and regulated to have subsidized costs, giving people irrespective of economic class an affordable access to doctors, diagnostics and treatment.  When a nation’s government fails to provide even this for its legitimate citizens it should be high time when people compelled their chosen representatives to be more accountable.  What else is a democracy when it fails the very people who keep it functioning? As Indian democracy turns 70, it is time we turned strong, mature and responsible.

Kafeel Khan Gets Bail After Being Arrested for ‘Inflammatory’ AMU Speech

Entrapped in the Debris of Time: How Bleak are our Futures?

The Ryan International School Tragedy: The Rot is within us

The Price of Democracy is the Death of Our Children