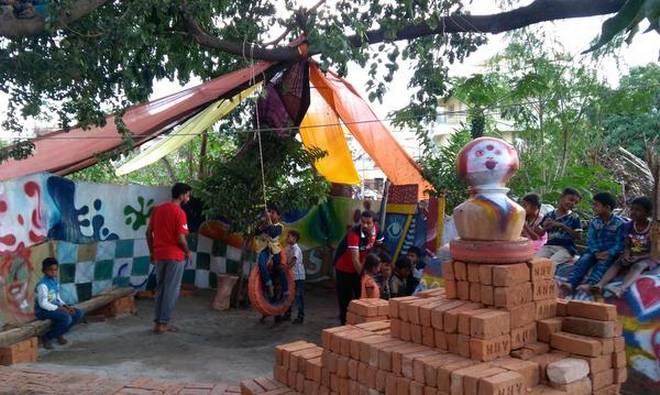 Recently a group of students in Karnataka transformed an age old dump yard into a park for marginalised children who were erstwhile deprived of any playing space. This is a story that reaffirms our faith in the potential of humanity and helps us challenge the hegemonic power of ‘bad’ news that our headlines are generally made up of.

Meera Naraina is a Social Activist – based in Bangalore.

It is only rare that when we turn on the television or flip through the pages of newspapers that we come across headlines which make us feel good about the world that we inhabit. From headlines that shout out stories of corruption and nepotism in political offices, to train accidents and natural calamities, to disheartening stories of exploitation, poverty and communal politics – tow world around us as we are often made to feel is full of evil people with wrong intentions and negative orientations.

It can be argued that to live in a world where one does not read or listen to these headlines would be nothing more than the escapist’s last resort or the romantic fool’s ultimate fantasy and that to live in the world we must be pragmatic, realistic and not emotional fools! Who can deny the fact that we do live in a world where violence, crime, exploitation, corruption have become everyday phenomenon and thus our ignorance about them will do little to change the situation while this may hold to what we often tend to ignore is the fact that it is in the same world that some positive things are taking place too and these do not often find adequate attention.

Would you not think that this unfair? Yes, while the fact is that both positive and negative actions take place in the world every day we tend to lay more emphasis on the latter and when the former does capture our attention we tend to relegate it as an exception and not the norm. We must acknowledge the fact that we must make this good news available and circulate it widely so that people who have grown so used to hearing of evil deeds and tragic events know that this world has not lost all its light and there is still a ray of hope, a streak of positivity in humanity.

This became clear once again when recently we came to know of a group of students in Karnataka ca working towards converting an age old dump yard into a beautiful playground for children of an adjacent slum. A group of 20 architecture students of the Siddaganga Institute of Technology(SIT) deployed their skills in a meaningful way and gave the residents of the Fakirpalya slum. It is a slum where most men are labourers while the women roll beedis to earn a living and the only open space available in the area was used as a dump yard. The children played on the roads. To keep the costs low and sustainable the students made use of discarded concrete pipes, tyres, bamboo mats, unused bricks, sand etc. along with other waste material. They also built a special place in the park where adults could sit and chat and painted the park in lively colours so that the area looked beautiful.

It is a simple yet touching story that reminds us that in times where greed and corruption are the norms a group of young minds thought of something as innovative as building a play space for children who had so far been deprived of this basic necessity of childhood.

Moreover the use of low cost material meant that this same model could be replicated in other states if there was an adequate will to do so. This also goes on to show that while most people go on to learn their skills in sophisticated classrooms and then do jobs that fetch them money for selling these skills to buyers there are individuals who see their local environment as their first laboratory. This sensitive, ecologically sustainable and profound use of knowledge must be shared widely.

This indeed is a story of human achievement and possibility and this tells us once again that there is hope in humanity and we must share stories that build up this positivity.