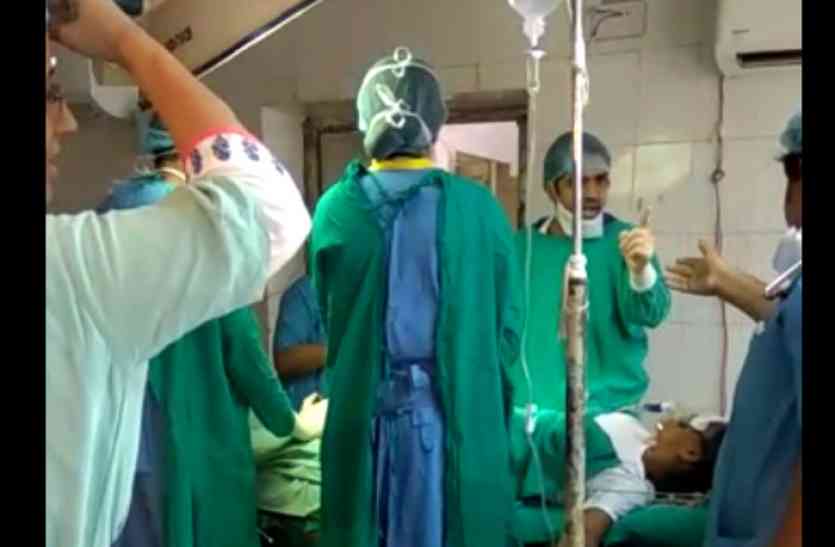 Doctors are endowed with the capability of healing patients and giving them a new life but recently an incidence in Jodhpur demonstrated the contrary as a brawl was prioritized over a human being- are we prepared to answer the many difficult questions that we are being once again reminded of?

Doctors are a group of professionals who patients trust unconditionally with their life. These are the people who are seen as second only to the almighty because in may cases they endow people with a second life or save them from the mouth of ultimate danger. But what happens if these very doctors turn into the ultimate death givers for patients? What happens if they instead of making the patient their top most priority indulge in trivial conflict that ends up killing the patient who lies just helpless?

In a shocking incident that unfolded recently in the county two doctors were recorded indulged in a verbal fight inside the operation theatre during a caesarian operation of a pregnant woman at the government-run Umaid Hospital in Jodhpur. The video footage recorded on the site of the incident that was showing the doctors fighting and hurling abuses on each other went viral on social media and has ever since captured the imagination of the nation and has held many people in utter shock.

What happens when we lose our ethical principles and indulge in  a careless act of negligence?

Though the initial reports had suggested that the newborn baby had died in the delivery room after the doctors were found fighting with each other instead of adhering to the patent on Tuesday, Rajasthan Medical and Health Minister Kalicharan Saraf has clarified that both the mother and the child are fine.  The doctors have been suspended after the incident unfolded and now a probe will be carried out in the matter.

Is it not a terrible crisis of our times that doctors who were once seen as the ultimate saviors are now prepared to indulge in trivia; conflict at the most critical moment even if it means irreparable damage to the life of a patient? Yes, this was evident in the shocking incident that was described below and it is an incident like this which will perhaps not only cause great worry for people who are dependent on doctors but also for many concerned citizens who have a conscience and a sense of sensitivity and morality. The woman and the child may have died or may be alive but that really is not the question worth debating here instead what we must be taking about is whether such an incidence also reflects the deeper decay in society and the way that the profession is approached in our times.

Are doctors necessarily the people who took to the vocation with an interest in serving people or do they look at it as merely another money making venture, is the patient seen as a body that can be seen or merely as a device to be experimented with? What are the ethical principles that one comes with or are they any at all? The answers to these and many other questions are challenges that the contemporary society is facing what will remain to be seen is whether we are prepared to answer them or willing to ignore them as we have been doing for the last many decades?