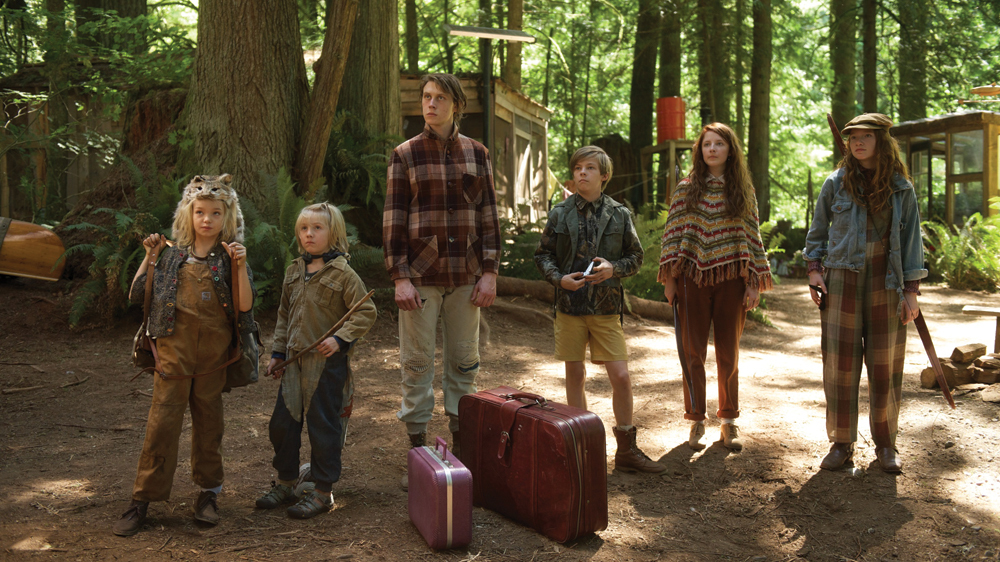 Captain Fantastic is a film that takes us on a unique journey of pedagogic possibilities and leaves us with many unexplored questions regarding the cultivation of the child’s mind, the inculcation of responsibilities and the development of a complete individual. It is a film that is at once engaging and stimulating. Here is a review of this fantastic film.

The 2016 film ‘Captain Fantastic’ by Matt Ross is a story of a couple ( Ben and Leslie) who decide to raise their family of six children in the wild.

They decide to lead a life in the forest region of Washington away from the modern capitalist society. They are keen on living a life with limited means. They live in a house in the middle of a forest close to nature and abundant scenic beauty; they grow and hunt their own food, give their children physical training and teach them self-defence. They educate their children in the left-discourse by assigning them literature to read. The phase of their lives that the film narrates is when Leslie is suffering from bipolar disorder and has gone to the city to get treated in a hospital. The expenses of the treatment are being paid by her father, who we discover has been in disapproval of Leslie’s husband and his lifestyle choices. We get to know that he agrees to pay for her treatment only on the condition that she would be treated in the city.

The opening scene of the film shows what seems to be Bodevan’s (their eldest child’s) initiation ceremony; he hunts down a deer and eats its raw flesh as Ben puts deer’s blood on Bodevan’s forehead and says “today the boy is dead and in his place a man is born”. This puts in an image of their primitive living in the wild. However, this is not true, as their life is based on rational thinking and discourses. Their thoughts and ideas are more “progressive” than primitive as we see them talking about Marxism and Noam Chomsky. Moreover, they detest the celebration of Christmas as they believe it is not rational enough to do so and they choose to celebrate events like Naom Chomsky’s birthday.

The kids’ physical training involves rigorous exercises, fights to learn self-defence and climbing cliffs. The kids are what we would call, home-schooled and they are made to read literature selected and assigned by Ben and Leslie. We get to know that Ben and Leslie would quiz and test them on the books they were made to read. Their education did not involve rote learning, instead they were expected to analyse, argue and debate. They are not schooled in any state school and do not follow a state assigned censored curriculum and are therefore, not disciplined state citizens and have the ability to think critically unlike most kids of their age. In the film we hear them chanting “power to the people, stick it to the man” quite a few times and this gives us a glimpse of their left-discourse. They talk and discuss about things that most schooled children would often not get to know about. They live a life that the society and the state would not approve of. They are the kind of children whom the state does not want to produce, they are non-consenting, questioning and thinking citizens.We also see them mocking irrational religious  traditions like those of the Christians and others who are victims of capitalists society, like those who enjoy shopping and mindless spending and those who are obese. Their education, as mentioned before, is not rote learning and they live on the concepts they strongly believe in.

Soon they find out that Leslie has killed herself in the hospital. But, Leslie’s father threatens Ben that he would get him arrested if he comes and visits her as he believes that Ben is responsible for Leslie’s suicide. So, Ben decides not to go to the funeral as he thinks it would be a risk. But we see him distressed as we discover that Leslie was a Buddhist and her Will read that she wished to be cremated as a Buddhist and not buried like a Christian. However, on being insisted by his kids who believe that their Grandpa is oppressing and so they must resist, they go on their Mission Rescue Mom. Mission Rescue mom is to rescue their dead mother from her Christian funeral in Mexico and to perform and celebrate a Buddhist death ceremony for her. So, the story of these characters and their lives is told to us as we see them on this mission.

As the story moves and we get to know them more while they are on their journey to Mexico. We see that the children are raised to be independent, to take care of themselves and an example of this upbringing is shown to us in the beginning of the film when Rellian breaks his hand while climbing the cliff and Ben refuses to help him and asks Rellian to help himself. And we see this character of independence in them as we see that they easily manage without their mother and even after her death they strongly handle the loss.

We also get to see that they are not “disciplined” children. They frequently curse and use swear words without any discomfort even when talking to Ben, they are not nagged on picking nose and they can express their aggression without any disapproving reaction from Ben.

We also see that their knowledge is not censored because they are not made to be educated in the state approve curriculum; and also because Ben always answers any of their kids’ curious questions with truth and not protective lies, even if the questions are about rape, sexual intercourse, drugs, suicide, mental health or any other concepts that are believed to be unfit for children and beyond their understanding.

Interestingly, we see that while on their journey to Mexico, Kielyr is reading a book and for which Ben asks to tell him the analysis she has made. She tells him that the story is written from a character’s perspective that is wrong in his deeds but she likes the character because it is written from his perspective and she can understand him. We see that this is exactly how we are told the story of Captain Fantastic. We get to know the story from the perspective of Ben and we hate those who do not approve of him. Like, we dislike Leslie’s father who is a rich man and disapproves of Ben and Leslie’s lifestyle. However, he only disapproves because he cares for Leslie and wants to protect his daughter. He wants to rescue her from that way of life much like how Ben tried to rescue Rellian from a way of life that he disapproved of.

This film acquaints us with the possibility of this way of life, away from the intellectually disabling system, away from the disciplining society and away from a society where powerful get their ways met at the cost of powerless. However, at the same time we understand the negatives of this way of life as we see Bodevan’s discomfort in having any conversation with females of his age. This raises the question for us that will these home-schooled children who have had an isolated upbringing, be able to interact with others in the society and how will they have comfortable social relationships with others in the society. It is a great film which tells us an unusual story of these characters that live an unusual life. The story is engaging and at the same time it raises some questions.

Further, as we see the story unfold we get to know the characters and their lives. However, we only get to know about the personalities of Ben and his  older male children Bodevan, who makes it to the best universities, and Rellian, who is not completely convinced by his father’s way of life. The film fails to engage and tell us anything about the female children, especially, Vespyr and Kielyr who are old enough to have a story and an evident personality atleast worth a little light. It is sad that the film fails to narrate their stories.

Why we are Uncomfortable with Neo-liberalism