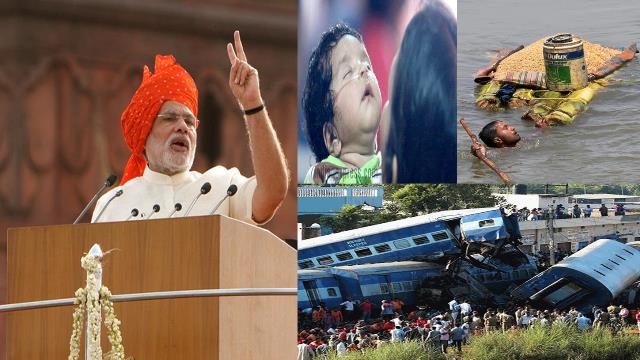 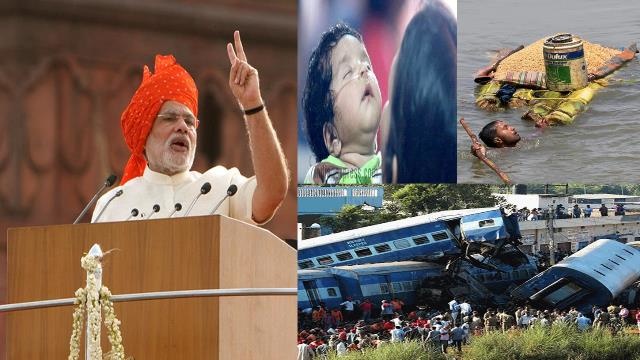 Can the nation prosper only with the hype and without sustained ground work?

We are happy to receive such an overwhelming response from our readers in response to our Weekly Debate Segment. We are happy to publish three of the best entries received for the debate. We encourage our readers to take part and generate a debate on themes of collective concern. Looking forward to your responses for the upcoming debates.

Nikita Khrushchev had wittily said, “Politicians are the same all over. They promise to build bridges even when there are no rivers.”

India as a nation has been witnessing psychological turmoil ever since independence and no substantial efforts have been put into force to deal effectively with this plight of the nation. From a macrocosmic point of view, there have been efforts to enhance the political functioning of the country. From the microcosmic perspective, little is being done to better the well-being and life satisfaction of the people of the country.

For instance, on 10th July this year, Wikipedia reported that 7 pilgrims were killed and 16 were injured during the Amaranth Yatra in a terror attack in Jammu and Kashmir’s Anantnag district. Action had been initiated to track the culprits. But one may ask, what actions have been taken to psychologically support the traumatized family members of the unfortunate victims of the incident? Have psychological help and counseling services been rendered to the kith and kin? What steps or measures have been undertaken to intervene in a crisis such as this?

Only when the nation learns to deal with distress at the micro level will real progress be made, paving the way to peaceful co-existence in a nation with a pot-pourri of traditional and cultural nuances.

The Prime Minister and his globe-trotting has enhanced the image of India by leaps and bounds. This has, in a sense, been one of the reasons to smirk at the so-called rival nations like Pakistan and blow our own trumpet, and has added spice to the hype of the President and consequently the nation he represents. The groundwork that is the need of the hour is for the present government and its head to revolutionize the country not only by taking necessary measures such as demonetization but also to empower the Psy-Q (psychological quotient like Intelligence Quotient or I.Q) of the citizens. To accomplish this may initially seem like a herculean task, given the immense population and high levels of illiteracy of our country. There is always hope though, for those who believe that the ultimate most holy form theory is action.

The quickest way to achieve Psy-Q, one may say is for a body of governance to mobilize health care professionals, psychologists, psychiatric social workers, counselors and psychiatrists to create nation-wide awareness programmes, sensitization programmes, workshops, seminars and other intellectual events. Unfortunately though, the number of such professionals in India is very scarce. Hence the only plausible and real solution for the time being would be to create a policy implementation and introduce psychology at the school level, let’s say at least commencing from the high school level. If this step is undertaken, it will do more good than one can imagine in the decades to come. Time for action, keep your fingers crossed!

Mohammad Zafar is working with the science team of AzimPremji Foundation, Uttarkashi.

Our politicians and policy makers are moving back in the issue of development. Several thinkers have analyzed pros and cons of Nehruvian model of development and the result of centralized industrialization, construction of big dams, projects is in front of us. The Temples of future, our dams are as much as harmful as they are beneficial. We can analyze case of Bhakhra Nangal, any other dam, mines and projects and should think about those who lost their land, home and displaced to live in the urban slums, mismanagement in compensations and the rise of several conflicts and yes, the ecological imbalances caused by developmental projects too. But still governments are more focused on centralized and big projects. Sardar Sarovar’s water level is going to increase, Uttarakhand’s CM is offering industries and Dam to the hilly state these are examples of following the legacy of centralized and privatized model of development. Why don’t we try to go with a mixed approach of Gandhian Swaraj, Ambedkar’s inclusiveness and Bhagat Singh’s rigor for socialist harmony, in nation building and development?

I think, we need the Gandhian idea of developing individuals by self-rule which includes self-sufficiency, self-dependence. Such Individuals will make self-dependent villages and society and then the nation will develop from the ground to top. But the ground level status of three major domains of development is well known today. The health, the education and the security. Seems these all are not in our political agendas. Equity based development won’t be possible by increasing number of IITs, IIMs, Dams, centralized industries, limited good roads to cities and metros. The only way is to invest more on public health and education in proper and transparent way. Along with this, providing good and sufficient staff to schools and hospitals would be nice.

The UNDP’s human development report 2016 says India’s expenditure on health is 1.4 % of GDP in 2014, our IMR is 37.9 and under five is 47.5 (per 1000). In 60s Kothari Commission recommended to increase budget of Education up to at least 6% of GDP. But still it’s far and to problematize the situation more, the fail-pass system has come again. Improving public health and education in a strong way is needed. But state thinks privatization is panacea for all ailments. Air India is going to be privatized, Railway too is on the list and Chetan Bhagat in an article in times of India suggests to minimize the burden of government and to privatize health sector too. This is a disastrous suggestion as private players will only focus on their profit and it will increase huge gap of inequity.

Development model and policies should be based on local contexts. For example, in hilly regions of Uttarakhand improving agriculture, horticulture, use of small solar energy plants and decentralized water based energy production for villages can be good idea to invest more and explore the notion of Hind Swaraj, instead of following New Delhi’s development model. A rigorous and continuous process is needed for the overall development. The proper functioning of law & order and harmony among people will lead to secure and safe society. For the nation’s real development all citizens of India should be on priority like in the Gandhian model of Hind Swaraj.

Nivedita Dwivedi is working in the field of education. She has completed  MA in Elementary Education from Tata Institute of Social Sciences, Mumbai.

Hype is at best the exaggerated version of reality. It, thus, does-not have an independent existence but is dependent on an underlying reality for its existence. If reality is pulled away from under the feet of hype, it is sure to collapse sooner rather than later. So the survival of hype is completely dependent on the sustenance of reality, that reality which has to be nurtured continuously through perseverance and hard work. This, in other words, simply means that hype or not, it is the real ground situation that matters, anytime and every time.

There are numerous events in history that have again and again reminded us of this fact. The world of finance is defined by a sine curve – booms and busts and booms and busts again. Hype builds up a boom, every time to collide with the stumbling block of reality, displacing it from its position of hubris. The sub-prime crisis has been the latest example of reality biting hype.

The world of politics is defined by hype. It is at its peak near the election time, when each and every political party indulges in rhetoric. However, the real progress of the nation is not measured by the number of promises made in election speeches, but by the amount of efforts put on the ground in meeting those promises. ‘Make in India’ cannot be realized by just coining and pronouncing out this slogan. Immense planning and implementation efforts need to be put in, at the ground level, to actually turn the dream into reality.

The world of education, which, according to me, is the backbone of any nation, and a prime measure of its progress, has been long suffering from this syndrome of ‘all hype but no reality’. Education has been extolled by one and all as the foremost tool for emancipation of masses and for the development of our nation and society. However, it is completely neglected in every budget document, failing to attract even the minimum expenditure of 6% of GDP, which is touted as the bare minimum that needs to be provided to this sector to sustain itself and grow meaningfully. The Right to Education Act was passed, in a much diluted form, after close to 60 years of independence. Though, the enrolment in schools is close to 100% now, the quality of education imparted, indicated by the learning outcomes, has a completely different story to tell. According to ASER 2016, the 11th edition of the report that collected data from 589 rural districts of India, the proportion of all children in Class V who can read a Class II level textbook is 47.8%. Nothing more need be said about the quality of education imparted in schools, unable to ensure even the development of basic minimum reading and writing skills in children.

The only way possible for our nation to prosper is to sustain the confident and silent ground work and resist from indulging in loud hyperbole, only to expose our insecurities to the world.