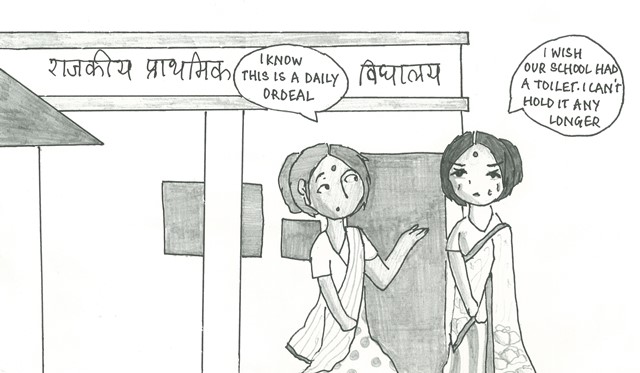 The availability of washrooms is but a basic necessity for dignified living but what happens when even this basic right is denied? In the context of the recent film Toilet: Ek Prem Katha the following article tries to explore this important issue.

Richa Goswami is  a PhD scholar at  Tata Institute of Social Science, Mumbai.

The name of the recently released film, Toilet: Ek Prem Katha is intriguing and makes one want to see the film. And I must add that it was not disappointing at all. The film has Akshay Kumar and Bhumi Pednekar in the lead roles and narrates the story of a hapless husband who fights the age-old customs, patriarchal mind-sets and his own father to secure a toilet for his wife.

The story is also about a woman who tries to make many compromises as she makes the transition from being a daughter to a daughter in law in her new house but at one point realizes that there is a limit to which she would bend her dignity and mould her way of life in order to adjust. There is a point when you have no choice but to be strong and lay out the non-negotiable. But the most important character of the film is the ‘toilet’. Its presence and absence decides the course of the story.

The film raises concerns towards one of the most essential and yet, one of the most neglected and abhorred spaces in Indian society. It successfully brings to the fore the issue of toilets being seen as taboos in the Indian cultural milieu. This then leads to disdain and neglect for it in the physical infrastructure and feelings of disgust and embarrassment in using it. The attitude of Indians towards the toilet as a distinct space is interesting. On one hand there are a lot of jokes around the subject  and on the other we find it very shameful to use the toilet. If we are visiting some one’s house we would not like to use the toilet at all. Asking someone ‘where the toilet is’ is considered equally embarrassing.

This perhaps flows from the traditional division of spaces in our homes as ‘sacred’ space and ‘polluted’. The toilet has always been the polluted space and as a result either it would not be a part of the house or if it is then it would be in a far off corner separated by a vast open space. Another indication of how unimportant ‘toilet’ is to the house is evident in the size and expenditure allotted to it during the construction of houses. I have seen many houses, which have 3 to 4 big rooms, enough open space but a small toilet. And the kitchen would have good cutlery but the toilet would perhaps only be equipped with a bucket and mug. To add to this, the toilet is a place to be used and not cleaned. Somebody else, whom we consider much lower to us would clean it and then would be subjected to the same treatment as meted out to the place he/she just cleaned. This has its roots in the institution of caste, and though the mind-sets have changed but there is still sufficient.

Women develop (or are forced to) learn the art of curbing their needs of using the loo for as long as needed. The living and working conditions of women from the slums leaves them with no choice. They train their bodies to relieve only once a day. No rewards for this Olympic feat apart from health issues. Similar is the fate of women going to schools. The issue of functional toilets as a mandatory requirement has been known for a very long time, but even today in most places both female teachers and students suffer the agony of controlling themselves during the school hours.

Accessing a public toilet is a different ball game altogether. Apart from the associated shame, going to a public toilet is no small feat. The public toilets almost everywhere; petrol pumps, highways, railway stations, restaurants etc. are always dirty. Incidentally the degree is almost as the sequence of mention. In such a scenario many prefer to relieve themselves in the open rather than using an infected toilet.

But why are the public toilets in India so dirty? The reasons are many and I would like to point out three that I consider significant maladies:

Most public toilets are devoid of running water. Just like the ‘Lota party’ in the film where you carry a lota/mug of water from your home, the assumption is that even to use a public toilet, you will be carrying your own water. The toilets are constructed only as four walls to help you retain your modesty, no other requirement is considered. So, even if there were a flush or a tap or a washbasin, you would not find water there.

The toilets on highways or petrol pumps often seem so dirty as if they have not been cleaned for months. The concept of clean toilet is not considered a right in our country. It is a privilege if you get one.

In a society where there is a caste based division of work, cleaning of the toilet is a work assigned to the lower castes. Upper castes often do not clean their own toilets for fear of pollution. In such a scenario touching the tap or handle of the flush of a public toilet, which has been touched by many others, would lead to extreme pollution. So it is better, to go, do the deed, as fast as possible and leave. Minimum exposure, minimum carried pollution.

In the end I would like to say as a member of the non-existent toilet brigade, I am glad that a movie on the issue was made and the much disliked word got a dignified place at least on celluloid.

The Illuminating Eyes of Rambabu