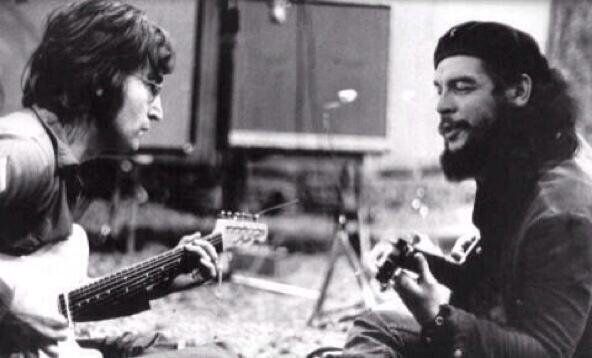 Ernesto Che Guevara was an Argentinian revolutionary and theorist who was also a key founder of the Cuban revolution in 1959 to overthrow American capitalistic forces. He is a widely acclaimed and cherished public icon even after 50 years since he died. Paradoxically the market led capitalistic forces that he dedicated his life fighting against has today become his biggest beneficiary by selling popular merchandise and apparels in his name. With a lack of sustained engagement with his life and philosophy and the market becoming the overpowering dictator, can the legacy of Che really be rescued?

Che Guevara was brutally killed fifty years ago in Bolivia. After leading an illustrious life of courage, determination and commitment to a distinct world view and facing an end that was gruesome by nature, it is worth examining what the legacy of Che means in our times.

The legacy of Ernesto Guevara has been for many people and in many cultural contexts a strange and confusing mix of his coming of age travel diary and his mass appeal as a t-shirt print. Both his travel diary and the t-shirt bearing his face are available on various online shopping websites at nominal costs. However, what is interesting to note is that before the market commoditized his name in such a grand way and used it as a strategy to sell products to young customers whose primary concern is to keep up with fashion trends without necessarily wanting to delve deep into matters or understand their philosophical underpinnings, Che continued to be for many generations the communist crusader, a people’s leader and above all an individual with distinct vision and commitment.

At a time when he had not yet become a royalty free merchandise, a product with easy availability in flea markets and grand stores alike , a wide array of young people especially those with a distinct way of looking at the world felt the importance of engaging with Che and his ideas in a more sustained and honest way. The second aspect of this phenomenon that we must also look at is the fact that many other giants of the ideology such as Lenin or Joseph Stalin may not have been able to retain their wider popularity and place in the hearts of the masses but Che has continued to remain a popular face. Perhaps his appeal as a youth leader with tremendous courage complimented with his appearance as a carefree and bold young rebel have collectively contributed to the retention of his mass appeal.

It is the marketing strategy of a capitalist society. We fight when there is a disrespect to the image. For example, we do not accept the image on a beer bottle or on a cigarette box. We do not accept indiscriminate exploitation of the image. But despite all the capitalist marketing strategies to commercialise his image, I would say it has backfired. It has only served to unite the rebelling youth under a common flag.

Moreover in students’ and young people’s movements in many parts of the world Che continues to be seen as a popular icon and source of inspiration. Being a political leader of the Left, Che made use of a distinct advantage that he had over both his predecessors and counterparts.

He had been a key founder of the Cuban revolution but later he travelled to Latin America and Africa to take the movement ahead and expand its base. Che continued to retain the spirit of the morally charged nomad which we witness in his Motorcycle Diaries. It would then not be wrong to say that for many of us the glimpse of young Che was almost synonymous with idealism. But what is tragic is that with the gradual dilapidation of the Left forces across the world and an overwhelming capitalist world order fast taking its place, like most other leaders of the genre Che too is fast being reduced into an empty symbol.

Since the time the Berlin wall came down, Che’s face seems to be a widely seen phenomenon with merchandise and consumable products in his name flooding the markets and many new films being made on his life. But what we must understand here is that even one of the most sensitive films made on his life by Walter Salles makes the mistake of seeing him primarily as a moral agent of the Left forces rather than looking at him from the broader prism of history and his ideas on capitalism and associated forces of capitalism. What this implies is that for those who have a shallow understanding of communism or do not adhere to its philosophy, Che has been projected as completely inaccessible.  True education shall enable us to learn from the lives of visionaries like Che even when we do not subscribe to their ideas, because icons like him cannot merely be reduced into party spokespersons, or fanatic ideologues or moral agents of a philosophy. They represent a philosophy of existence, of resistance, of collective action and egalitarian societies which irrespective of our personal visions resonate with the aspirations of mankind since time immemorial.

While we know that despite the extreme marketization of Che merchandise and a growing shallow understanding about the man himself, there are many in various parts of the world that still cherish his ideas and hold great reverence for the man. The paradox of our times is only perhaps that the very system that Che wanted and worked towards overthrowing and revolting against has consumed him in its own logic.

Shunned to the Margins: Who is Answerable to the Indian Disabled?