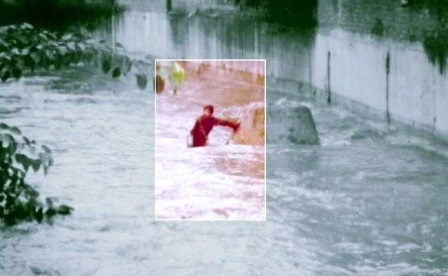 A man in Hyderabad was recently washed away into a drain as bystanders recorded his struggle on their mobile cameras. Incidents of such nature remind us of the growing human insensitivity and the coldness in human interaction. Amidst these conditions does hope lie anywhere?

Ved Prakash is currently working as a freelance journalist – based in Kolkata.

India is a country where every day hundreds of people die in accidents that could have been easily avoided. From victims who drive mindlessly and without protection on highways, to those who cross railway tracks, to those who die in frequent stampedes at temples and crowded places to those who slip down a manhole or a drain on the road- the cases of deaths in such incidents is almost an everyday affair in a country like ours. What is the reason for this?

Why do accidents based on pure negligence take away so many lives when just a little bit of vigilance and ground work could have easily solved the crisis? In a context such as this one feels that perhaps there is a stark absence of due mechanism that ensure that these mishaps do not take place at least as frequently as they do today. With corruption effecting every institution of the country and contracts of roads, railway tracks, building being given away often to incompetent bodies, it is not surprising that incidents like these are taking place. Added to this is the lack of awareness and general sense of vigilance among ordinary citizens which makes them easy victims of the greater crisis.

It is also ironic to see how incidents of this kind have become such an intrinsic part of the system of the country that it lasts only for a short time in the memory of both the government authorities and the general public. Who bothers to know what steps were taken after the train overt bridge stampede in Bombay recently or what intervention was made in Gorakhpur where infants have continued to die?

The authorities and their negligence is definitely a matter to be thought about but simultaneously we must also think about what role does the media play in looking at issue and following them, what kind of vigilance do we show towards these issues as concerned citizens. Our lack of concerns, the negligent authorities and the insincerity of the media on following up stories even when they lose their instant appeal have all collectively brought us to the crisis that we are in today.

It is in this context that we can speak of another recent incident in Hyderabad where a person accidentally fell unto an open drain. He tried to hold on to an elevated manhole but got washed away by the speed of the water. His struggle has been caught on camera by bystanders. A rope was thrown to help the man but he failed to hold on to it and succumbed inside. The search for the dead man is underway.

Many of us may not feel moved by an incident of this kind because its frequent reoccurrence may have numbed us down. But what we must understand is that what happened to this man today could happen to us tomorrow. How long can we live in this slumber? When shall we be awakened to the reality that haunts us?

Aurangabad Train Accident :The Death of the Dignity of the Migrant Class

Speedy Justice or Extra-Judicial Killing: the Debate over Police Encounter of Accused in Hyderabad Rape-Murder Case

Normalising Violence Against Women: How Many More Priyanka Reddys Do We Need?