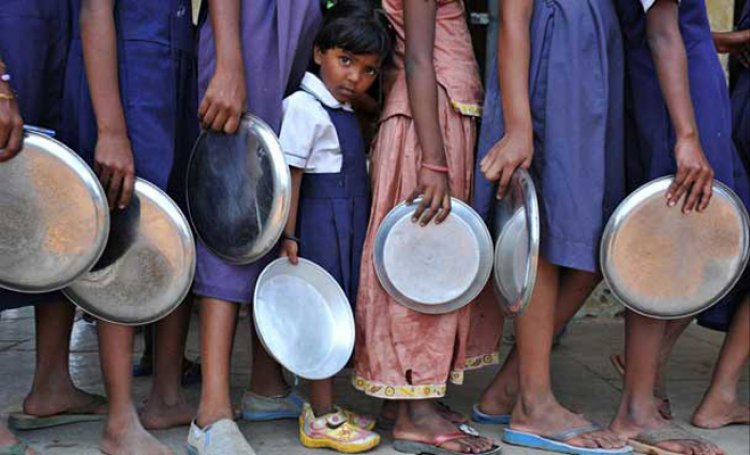 India ranks poorly on the global hunger index and yet we conveniently choose to neglect fundamental national priorities for market centric developmental agendas that are often against inclusive growth. In this context what do these misplaced priorities denote?

India sure has greater concerns and challenges to be met than what appears on the surface. We might be a nation that is fast moving towards the dream of building smart cities, bullet trains, digitalized economies but perhaps at a juncture like this they all appear like cruel jokes.

In a nation where development has forever been one dimensional and pro poor programs have become a common electoral strategy to secure votes, there is no doubt that many basic structural tasks have not been taken seriously enough. It is not very surprising to know that because of its grave hunger problem India ranks 100th out of 119 countries on the global hunger index.

Today, India features behind countries like North Korea, Bangladesh and Iraq. The country’s alarming hunger level is entrenched and enhanced due to a wide variety of factors such as high child malnutrition and thus underlines the urgent need for stronger commitment to the social sector, the International Food Policy Research Institute (IFPRI) is recorded to have said in its report.India secured the 97th position in last year’s rankings. This year India is ranked 100th out of 119 countries, and has the third highest score in all of Asia — only Afghanistan and Pakistan are ranked worse than India.

At 31.4, India’s 2017 GHI (Global Hunger Index) score is at the high end of the ‘serious’ category, and is one of the main factors pushing South Asia to the category of worst performing region on the GHI this year, followed by Africa South of the Sahara, it added.

The report ranked 119 countries in the developing world, nearly half of which have ‘extremely alarming,’ ‘alarming’ or ’serious’ hunger levels.

“India’s high ranking on the Global Hunger Index [GHI] again this year brings to the fore the disturbing reality of the country’s stubbornly high proportions of malnourished children,” the statement said.

IFPRI pointed out that more than one-fifth of Indian children under five weigh too little for their height and over a third are too short for their age.

“Even with the massive scale up of national nutrition-focused programmes in India, drought and structural deficiencies have left large number of poor in India at risk of malnourishment in 2017,” said P.K. Joshi, IFPRI Director for South Asia.

However, he said that the on-going efforts are expected to make significant changes in improving the existing situation.

Mr. Joshi appreciated that India has developed and launched an action plan on ‘undernourishment free India’ by 2022. The plan shows stronger commitment and greater investments in tackling malnutrition in the coming years.

Only three other countries in this year’s GHI — Djibouti, Sri Lanka and South Sudan — show child wasting above 20%. India’s child wasting rate has not shown any substantial improvement over the past 25 years.

However, India has made considerable improvement in reducing its child stunting rate, down 29% since 2000, but even that progress leaves India with a relatively high stunting rate of 38.4. Are the concerned authorities paying any heed?