Can children learn when there is no fear of failure? Are learning outcomes necessarily dependent on competitiveness and the perpetual sense of anxiety or can the right legislation achieve an educational milieu where quality education is possible in freedom and cooperation?

Sheshagiri K M  is an educationist based in chhattisgarh. 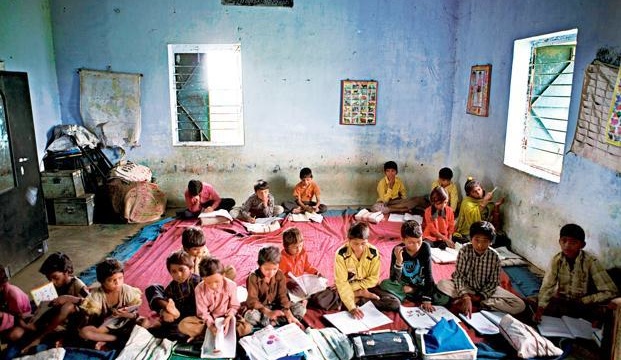 We saw it coming. How couldn’t we? For a long time, a large number of teachers, parents, bureaucrats, politicians and others who spend some time thinking about education and what to do with it, have been disgruntled with what they think is the biggest weakness of the Right to Education Act of 2009 – the state’s commitment or promise that no child will be detained till the 8th grade (till elementary level education, that is). It is thus clear that the state will not fail the child and keep her in the same grade, whatever the reason may be. This is enshrined in Clause 16 of Chapter IV of the Act: No child admitted in a school shall be held back in any class or expelled from school till the completion of elementary education. Ostensibly, when the Act was passed by parliament, the belief was that the child’s circumstances more than the child, are responsible for lack of learning at school.

This commitment will soon be withdrawn, if the government of the day has its way. On the anvil is an amendment to the Act which proposes that from grade V, there will be exams. If the child passes these, good. If the child fails, (and there can be a number of reasons for failure), the practice of detention will kick in. The benevolent state will give the child another chance to pass, with additional coaching. I wonder how additional coaching will be provided, when the coaching itself is not up to the mark. May be they will doctor this and then show that the child has passed. After all, every teacher has to look good in the eyes of the parents and the state. If additional coaching doesn’t work, the state will give up and declare the child as failed. What happens then? May be grade repetition will somehow and magically make the child learn.This is what many people want. The child has to be failed, only then he or she will learn, they say. Fear (of failure, of the teacher) is the only way out, they say. The outlandish observation made is that learning levels in children have alarmingly dipped following the passing of the RTE Act in 2009. Nothing can be further from the truth. There is no evidence to substantiate the claim that children were learning better when detention was in place. Our learning outcomes in schools have remained poor for a very long time, Act or no Act.

There are other more fundamental reasons for this sorry state of affairs. An educationist I spoke to recently sounded resigned to the impending victory of the detention walas. She had information that most Chief Ministers were supporting the proposed amendment. Many honorable judges of the Supreme Court (which may be the final arbiter in the event of litigation) were already convinced that detention was the only way to ensure learning to arrest the deteriorating learning outcomes in school, she said. The prognosis surely sounds grim. In August, the union cabinet provided its assent for detention to be made a part of the Act. A recent NCERT survey shows that all states, barring Maharashtra, Goa, Karnataka, Telangana and Sikkim, want no detention to be scrapped right away. If the Delhi government is to be believed, children will become ‘unreasonable, undisciplined and will drop out of school’ as a result of no detention. Really?

In all these machinations, the underlying thought is this: the burden of non-learning rests with the child. Actually, let me modify that a bit – the burden of not passing the exams rests entirely with the child. Passing the exams is not the same as having learnt and understood something. A little personal reflection will show this to be the case.Why should the burden of no-learning or very poor learning be on the child alone? Is the state so keen on washing its hands off this very important right of every child, the right to learn, which is at the heart of the right to education?

In Chhattisgarh, where I work, there is a mobile application which monitors, in real time, the attendance of both children and teachers in elementary schools. Teachers, parents, government officials, a few elected representatives all report on this app. There are a little more than 20000 users (admittedly, a small number), but not all of them report regularly. Still, it is interesting to see the data that gets routinely thrown up. Over the past several months, children’s attendance has averaged 70%, and teacher attendance, in the mid 70’s, with district wide variations. If learning has to indeed happen, one would expect these percentages to be up in the 90’s. It is clear that both children and teachers are not regular to school. Little wonder that children don’t learn.If attendance is fundamental to learning in school, so is the nature of what happens inside the classroom. Often, the term ‘Time on task’ (TOT) is used to find out how much of ‘learning time’ the child gets in the six hours or so that every child spends at school on an average. Over the years, studies of Indian classrooms clearly show that we are found heavily wanting on TOT – most of the time is spent on giving instructions (‘do this and do that’) and all children end up doing more or less the same things. Little time is spent on discussion, exploration and expression, with the result that there is very little understanding.

The National Achievement Survey (NAS) results of the NCERT tellingly bear this out. In fact, TOT studies actually tell us that there is very little time spent on ‘active learning’, involving application and resulting in understanding.This is a challenge that the state needs to urgently address. Apart from the issues of attendance, the burden of non-learning is thus linked to the burden of non-teaching or teaching that does not make any real difference, which is further linked to the ways in which teachers are prepared, monitored and supported. It is the state which is found wanting here, not the child.It is a simple truth that enrolment in school does not guarantee attendance, which in turn does not guarantee learning. Should the blame for this rest at the door of the child? A child is unable to reach school because of factors beyond his or her control. For communities and families facing severe social and economic pressures, participation in school becomes the first casualty. How is the child to be blamed for these circumstances? Even as getting teachers to attend school regularly is the task of government, getting children to attend school and remain there is a task that requires several interventions ranging from parental interest and commitment, social safety nets, active participation of the local community in school, attractive and enabling learning environment at school, among others.

In each of these areas, much work remains to be done by the welfare state. That is the reason why the RTE Act holds the state accountable.Branding a child as a failure will have a debilitating effect on her self-esteem. It can scar her for life. Year after year, many young lives, especially in urban settings, are snuffed out because the child who faces difficulties just does not get the emotional and academic support that she so desperately needs.In the classic How Children Fail, John Holt observes that children are inherently intelligent, curious and love to learn, provided there is an enabling environment to do so. We all have experienced this. It is the nature of the school that fails the child, not the other way around. More important than passing the exams to show some superficial learning, our schooling system fails miserably in inculcating in children the ability to be curious, to be eternal learners.

Instead of bringing a draconian amendment to the right to education act, the state should first go about setting schools right. On a war footing. Learning will then happen.