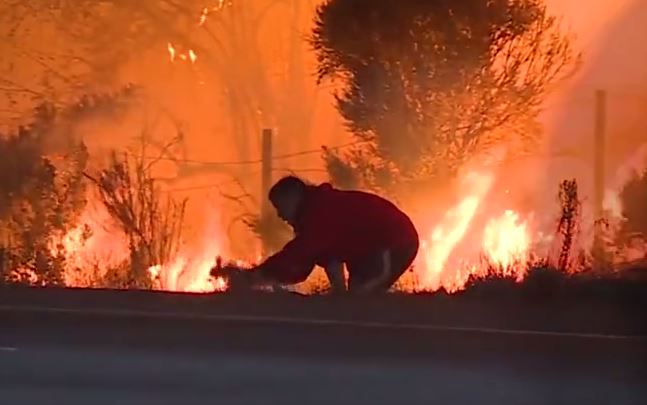 While a Man in California Risks his Life to Rescue a Rabbit Another in Rajasthan Burns a Person in Communal Rage: Two Sides of the Coin called Humanity.

The video footage of a man holding a small rabbit in his arms and running through a wildfire in California has been going viral on social media. The video has rightly captured the imaginations of thousands of users across the world that have seen in the act performed by the unknown man a hope in the positive qualities of humanity.

In a time and age where we are bombarded from all angels and through all sources of information about incidents of stark violence, brutality and criminality perpetrated by human beings across the world; an incident such as this surely deserves to be shared and talked about.

As Californian’s suffer the devastating effects of the spreading wildfires that have caused rampant loss in the last couple of days, the story of a man who braved the fires and risked his own life in order to save a little rabbit has suddenly restored our faith in humanity. The man’s identity remains unexplored even after so much love is being showered on him for this wonderful act online but who really cares about his identity when the act that he so unconditionally performed is enough for us all.

While the news of death and destruction, human pain and unprecedented loss have been circulating in the air a gesture such as this has surely reaffirmed our faith in the potential of humanity for unconditional compassion and care.

While the video of the man rescuing the rabbit from the wildfire is doing the rounds and capturing the attention of the world media there is another video from a context closer home that has haunted us tremendously.

A migrant labourer from Malda, West Bengal belonging to the minority community was brutally beaten and burnt alive by a communally charged man in Rajasthan. While the man kept pleading for help and rescue no one came to help him in any manner.

The video shows us how brutal and violent human beings are capable of becoming and how within a culture that is aggressive violent- we seem to have lost all our sanity. The video of the man being attacked instils both fear and anger amongst anyone who watches it because not only does it disturbs the conscience but it also compels us to ask where the future of the human race lies. Are we essentially violent, ideologically charged, fatalistic and insane beings who just know how to kill and destroy?

The two videos depict the world of human beings as bipolar realities. On the one hand there is the story of compassion and love while on the other hand we witness stark violence and destructive tendencies. Both are equally real and both compel us to think about humanity. What is the essential nature of man- compassionate, caring and endowed with the ethic of care or merely a brutal, selfish and charged being enslaved by the ego? We urge you to think of this important theme and share with us your own ideas on it.

In this new world of bushfire terror, I question whether I want to have kids