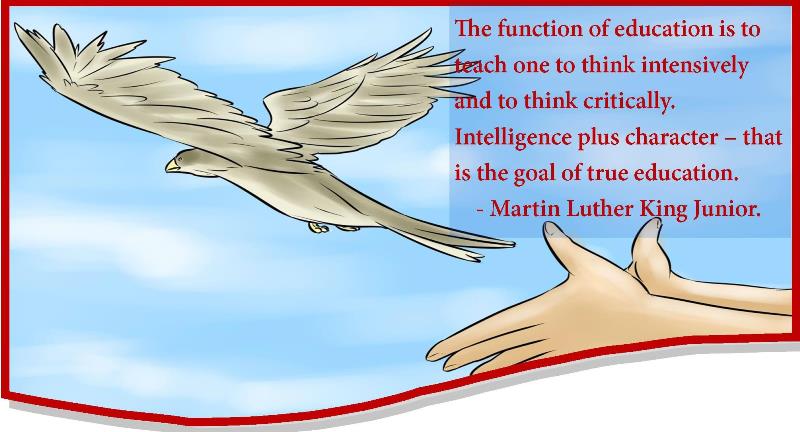 The twenty first century has brought with itself tremendous challenges before the educational community. The education of the future must be one that unites the intellect and the heart and for this it is time that innovative practices must not just be conceptualized but also brought into implementation.

“The function of education is to teach one to think intensively and to think critically. Intelligence plus character – that is the goal of true education’, said Martin Luther King Junior. To teach is to provide wings to fly. Engaged pedagogy, an approach to holistic learning is a practical theory formulated by social critic and educator Bell Hooks. Engaged pedagogy is deeply concerned about education as freedom. It looks at education as a force for liberation and not a measure of memorization. It challenges standard pedagogical practice in its insistence on spontaneity and joy. The teacher must teach in a manner that cares for the soul of the student. Boundaries that confine the pupil to the rote, assembly-line approach must be transgressed. Teaching must facilitate engaged pedagogy in the classroom and not passivity. Teaching must aim to hone one’s thinking quotient. Thinking, according to Lipman (2003), entails interpenetration and interbreeding of different forms of mental behavior, which we are free to conceptualize as reasonableness, creativity and care. Thinking is the operations center of human activity. The temptation is immense indeed to draw the inference that people are to be treated as Cartesian machines: robots piloted by their intellects.

Multidimensional thinking, which aims at a balance between cognitive and the affective, between the perceptual and the conceptual, between the physical and the mental, the rulegoverned and the non-rule-governed must be encouraged and imbibed. Teaching must have ‚ecological validity‛ in the sense that what is taught inside the classroom must be applicable in reality – outside the four walls. Textual analysis must be true in the outside world. To abandon our efforts to bring this power under our control is to commit moral suicide.

A well -wrought plan can avoid such a disaster. Paulo Freire’s insistence on ‚conscientization‛ in the classroom is vital for effective learning. It is important for the pupil to be an active participant, not a passive consumer of factual information. Freire’s work affirmed that education can only be liberatory when we claim knowledge as a field in which we all labour. Freire also emphasized on‚ praxis‛ – action and reflection upon the world in order to change it. We must not be seekers of compartmentalized bits of knowledge but strive to create participatory spaces for the sharing of knowledge. Our objective must not merely be ‚to know‛ but ‚to think‛, ‘to do‛ and ‚to matter‛. The mini-kingdom, that is, the classroom must be considered a safe haven to dabble with awe-inspiring ideas, exercise freedom of speech, and create new pathways of thinking and to transgress the racial, sexual and class boundaries. We are rapidly becoming estranged from education and far more experienced in terms of memorization and the subsequent recalling of information.

The primary ciphers of bonding and identity, student expression, the voice, the tonality, the facial expressions, the gestures and overall body language of the student convey a host of latent information to the teacher, which is seldom addressed. Empowerment in the classroom happens when both pupils and the teacher share confessional narratives from their life experiences. The impoverishment of teaching has been a phenomenon that has occurred in many educational institutions around the globe, and neither party has taken cognizance of its momentum and dire consequences.

What really gives the curriculum its importance and relevance in educational terms is whether it serves as the forum or vehicle through which students are enabled to explore in all earnest, what it is to be human. Learning and an individual’s identity must go hand in hand. Dunne (1993) writes that ‚What is important..is that in the educational community – which rightly is the whole community – a discourse should be available in which the nature of teaching as a practice can be articulated and thereby defended.‛ Reynolds says that in pulling the ‘lever’ of the school we have missed pulling the ‘lever’ of the teacher. He believes that schools should become, like aero-planes and nuclear power stations, ‘high reliability organizations’ where failure in even the smallest percentage of cases is as unacceptable as it would be for an air traffic control regularly to lose a plane or two.

Richard Smith says that cause (teacher behavior) and effect (pupil learning) are to be conjoined with sufficient scientific glue to defy the most incompetent or (the older fantasy) bolshy practitioner. The common portrayal of schools is that they are resistant to change, unwilling to adopt innovative methodologies and are incapable of a different sort of institutional organization. The traditional conception of school has been artificial and monastic; they were places cut off from the wear and tear of the run-of-the-mill life. Academic seclusion was one of its defining characteristics as the campuses were out of touch with the social and economic life surging around them. Many schools were and even today are preoccupied with preparing pupils to pass examinations prescribed by the inscrutable wisdom of educational authorities. K. G. Saiyidin in‚ The School of the Future‛ (2000) remarked that Physics, Chemistry, and Mathematics having a practical application must be learned in workshops and fully equipped laboratories – not the present mimic doll-house laboratories where children juggle with test-tubes and learn how to change the colour of liquids.

Thankfully though, globalization, advances in information technology and post-industrial economies have paved the way to the schools of the future and to the pedagogy of the future. The traditional school or university is set in a large geographical area called the campus (Latin for an open plain) and fenced in to imply that it is a self-contained institution. Contemporary schools and universities are now becoming networked through a rich variety of alliances and interactions. They share compacts with other schools and universities, an extensive set of multimedia connections like the Massive Open Online Courses and strategic alliances with service agencies.

What are now prevalent are quasi-systems with quasi-monopoly. Off-shore campuses and multiple campuses of the same university are now a common picture. Professor David Hargreaves (1997) of Cambridge University observed, The traditional ‘education system’ must be replaced by a polymorphic educational provision – an infinite variety of multiple forms of teaching and learning. Education and pedagogy must involve dialectical engagement with the larger social context and its social conditioning. A contextualized approach to learning that celebrates epistemological diversity as counter-hegemonic and transformation is what is required.

We must be producers of democratic and evocative knowledge and become detectives of new ways and means of perceiving and constructing the world. P. L. Thomas and Joe Kincheloe (2006) argue that through the practice of education and the critical engagement with texts, we can use the magic of words to move human beings to a new cognitive frontier. And afterwards, there will be no looking back.

This article is published in The New Leam, DECEMBER 2017 Issue( Vol .4 No.30-31) and available in print version. To buy contact us or write at  thenewleam@gmail.com