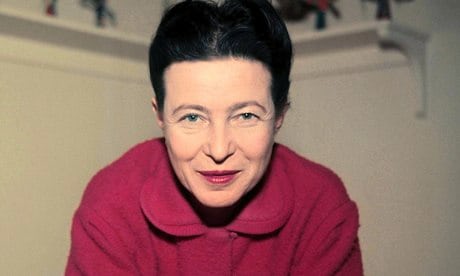 Simone de Beauvoir (9 January 1908- 14 April, 1986) was a French thinker and existential philosopher who continues to have everlasting impact on our world and thought process. She had an enormous influence in the cultivation of feminist theory and critical existentialism she wrote several well-known pieces such as Second Sex, Feminist Existentialism, The Coming of Age and many others.  As we commemorate her birth anniversary we share some of her impactful words that resonate with our world even today.

As we commemorate the birth anniversary of one of the greatest and most influential thinkers of our times Simone de Beauvoir we contemplate upon some of her most impactful words on the nature and fate of womanhood.

To emancipate woman is to refuse to confine her to the relations she bears to man, not to deny them to her; let her have her independent existence and she will continue nonetheless to exist for him also: mutually recognizing each other as subject, each will yet remain for the other another. The reciprocity of their relations will not do away with the miracles – desire, possession, love, dream, adventure – worked by the division of human beings into two separate categories; and the words that move us – giving, conquering, uniting – will not lose their meaning. On the contrary, when we abolish the slavery of half of humanity, together with the whole system of hypocrisy that it implies, then the ‘division’ of humanity will reveal its genuine significance and the human couple will find its true form.

Is this passage not capable enough of shaking us from the slumber of patriarchal conformity? What has added to the greatness and evergreen nature of her words is also the fact that she is capable of seeing and understanding the exact roots of suppression that women around the world are facing.

She sees men and women together constituting a universe where egalitarianism between the genders will be lived reality. When she reminds of the fact that indeed half of humanity is a victim to slavery, it makes us sensitive to our own plight as women and to the collective struggles that we must initiate to create a better world.

She may have died and a host of other feminist literature’s from around the globe may have occupied our imagination- but even today the contributions and path breaking visions that a woman like her left us with, cannot be forgotten.  We pay our respects to this great legend and are sure that she will continue to inspire humanity for many more generations to come.