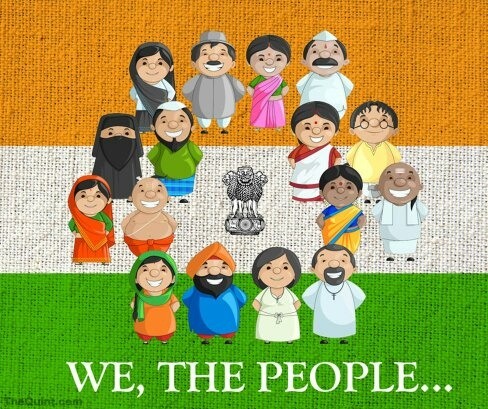 REPUBLIC DAY SPECIAL
The 69th Republic Day is here and now is the ripe moment to think of the trajectory of the nation. With success and contradiction, achievement and challenges, India is unfolding its unique tale. Let us revisit, let us contemplate and think of this nation that we call ours.

Today is indeed an important day in the life of our nation. As India celebrates its 69th Republic Day this year we contemplate upon the tremendously long and challenging journey that gave birth to our nation. After a struggle characterized by perseverance and determined zeal against the mighty imperial power, after undergoing a fracture that divided and broke the unity of the nation and after innumerable hindrances- India as a sovereign, democratic Republic was born.

This is also an important day in terms of its historic relevance. This was the date on which the Indian Constitution was brought into effect in the year 1950 replacing the Government of India Act of 1935, as the new governing document of the nation. The Constitution was adopted by the Constituent Assembly in 1949 and came into effect on 26th January 1950.

It is also to be noted here that the date 26th January was chosen because in the minds of Indians it held a very special place. It was on this very date that in 1930 there was a declaration for complete freedom (poorna swaraj) by the Indian National Congress as opposed to the dominion status that was offered by the British.

It is true that on Independence Day we celebrate the achievement of freedom from British Rule, however, on the Republic Day, the nation celebrates the coming into force of its constitution.

A draft of the constitution was made ready by the committee and was submitted to the Assembly on 4 November 1947. Thereafter to make the process democratic and completely open to public input – the sessions were made open to the public through debates and discussions in newspapers, radio and other platforms. The Assembly met for 166 days, spread over a period of two years, 11 months and 18 days before the Constitution was finally adopted. After much deliberation and some important modifications, the 308 members of the Assembly signed two hand-written copies of the document (one each in Hindi and English) on 24 January 1950. Two days after this the Constitution finally came into effect in the entire nation. After contextualizing the importance that this day has from the life of the nation, it becomes very important for us to understand how over the years the ideals that the national movement or the Constitution stood for are fading away and often we see its mere symbolic presence around us.  There is no doubt that in the past 70 years since we became independent we have tried our best to break free from the shackles of poverty, malnutrition, communalism, marginalization, regional deprivation and other discriminatory practices through a series of legislative and judicial mechanisms.

However, it will not require extreme effort on our part to realize that even today these critical issues continue to haunt us. India has a very stark divide between the wealthy and the poorest of poor and the vicious cycle of marginalization and backwardness are all its associated outcomes. Likewise, despite having made violence against the backward and marginalized communities punishable by law and labeling the practice of untouchability a crime, newspapers are full of instances where entire Dalit villages have been burnt, individuals beaten for using the wells of the upper castes and individuals undertaking inter-caste marriage being ostracized.

Communal violence based upon inter-community political provocation, perpetuation of dangerous stereotypes has made many of our towns and cities vulnerable to conflict based on religious identities.  Women continue to be at the margins of the social order despite our advances in science, technology, communication and industry (the necessary indicators of modernity). Unequal pay, sexual violence, confinement to domestic roles, dowry deaths, female infanticides and feticides and other forms of covert and overt oppressions continue to curtail the possibilities for free movement for women across the country.  Perhaps, despite the long path that we have traveled in post-independent India, the real experience of freedom and justice has only been limited in the hands of a few and has remained a distant reality for the masses. I am sure that all of us have seen the little children and women selling the national flag on roadsides – they have no food or shelter, no education nor healthcare and for them, the symbol of the benevolent nation stands only as an unfulfilled promise.  In the course of the path that the nation adopted post-independence there seriously has been an uneven distribution of both resources and opportunities. And often what we have confused to be development has meant the deprivation and further decline of the ordinary masses. Mega-dams and nuclear plants, industries on agricultural lands, exposing ordinary farmers to global markets, digitalizing an economy where illiteracy is rampant and poverty the norm, reducing prices of air travel and enhancing train charges,  making gadgets and cosmetics cheap and imposing tax on life saving drugs,  introducing car lobbies when state supplied transport infrastructure is crumbling, investing on the beautification of urban roads but denying shelter to the urban poor are some of the key contradictions that we see all around us in the contemporary Indian scenario.

India faces critical issues that are waiting to be addressed and until we rise up to the needs of our times, India will remain a Republic but only for a lucky few. On this Republic Day, I urge all Indians to stop for a moment and think of the nation that the call their own.