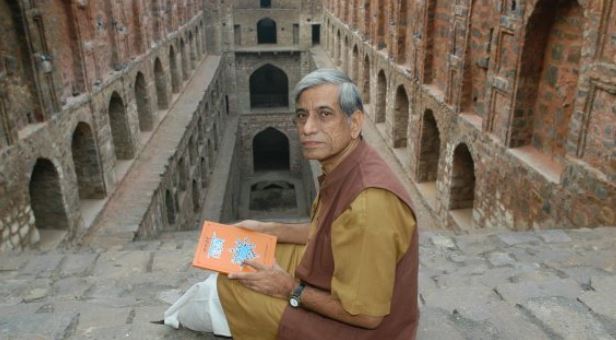 Anupam Mishra was a Gandhian thinker and environmental conservationist who worked extensively for the conservation of water resources through traditional techniques. His ideas and contributions will continue to resonate in our minds for an eternity.

The sketch depicted above is what Anupam Mishra called a social tattoo in his book Aaj bhi khare hain talaab (Ponds are still relevant).

In this book, the sketch of Sita Baawadi is described as:

‘The Sita well has a main inlet and within the well are waves
located in its center is a nucleus, which represents life
Outside the well are steps leading to it.
And at its four corners are flowers carved from stone.
But with the fragrance of life.’

Mishra explains that all these complexities are well captured in this elegant sketch. A large section of the community has imbibed this symbol which depicts life and culture. It also contains a philosophy of conservation and a living memory. I first saw the image of Sita Baawdi at an NGO named Tarun Bharat Sangh (TBS) located in Bhikampura village of Alwar district in Rajasthan. TBS is a three-decade old institution and is known for revival of dried rivers in that area. Under the leadership of Rajendra Singh, the Magsaysay award winner and popularly called Jalpurush and also Johad wale baba has immensely worked for strengthening the commons perspective on water. Anupam Mishra was associated with his organization for a long time and also inspired Singh in conservation of traditional knowledge systems of water conservation.

When I got to know that Anupam Mishra works with Gandhi Peace Foundation (GPF) and lives in Delhi, I decided to meet him after reaching Delhi. As a researcher, I thought of him as a resource person who motivated the works of Rajendra Singh and TBS. So, I prepared a questionnaire to conduct his interview as part of my first meeting with him and was very excited about it. However, to my utter surprise he asked me to keep the questions aside for some other day and to have a general interaction as we were meeting for the first time.

Then, in a way he rather asked me many questions about myself, what made me get into research on water, how did I get interested in meeting him and many more. Subsequently, he shared a range of his concerns on issues viz. development, education, role of the state to name a few. Spending two to three hours in my first visit to Mishra at GPF, I did not realize it much that the meeting is not only changing the orientation of my research but also opening up the new vistas of my life.

He gave me a copy of his book Aaj bhi Khare hain Talaab which remains a prized possession till date. It also reminds me how enthusiastically I asked him for an autograph or to write something on the book and he politely refused to do so. He said that ‘I have simply documented the knowledge practices that the local people shared with me, it is their contribution and I can’t claim myself as the author of this book’. So, the very first meeting gave me enough food for thought to consider him as a different or say not so this-worldly person. He seemed quite other worldly and partly reminded me of Prof. Avijit Pathak. To both of them, life is to be seen in a holistic perspective rather than in fragments. From poetry and science, to art and architecture – one needs to see a resonance with one another.

Afterwards, I met Anupam Mishra numerous times and for good or the bad I don’t know but could never think of conducting a formal interview as part of my research on water. However, I did learn many lessons of life from him and simply feel so enriched to have met him in person. Meanwhile, I completed my Ph. D and started teaching Political Science at Delhi University and often used to request him to come and deliver a lecture to my students. He never agreed to that and rather asked to bring them to meet him. That made me start attending the two annual lectures held at GPF on 30th January and 2nd October along with my students. It also brings back me the memory of those few words and sentences which Anupam ji used to speak before the lecture to introduce the speaker or to start the event, how succinct and lucid.

Although Mishra is known as an environmentalist and water conservationist but he had a formal degree in Sanskrit. Very few of us know that he did so only because he heard that his father wanted someone in the family to study Sanskrit. He was also a great photographer and captured the nuances of life in Rajasthan. He started his career by reporting on Chipko Andolan was more of an activist cum journalist. Sunderlal Bahuguna and Chandi Prasad Bhatt, the renowned leaders of Chipko movement were very close friends of Mishra. He later joined Gandhi Peace Foundation in 1980s and established its Paryavaran Kaksh (Environment wing). He was also the editor of Gandhi Marg, a bi-monthly magazine published by GPF in Hindi.

He also remained linked with the works done by Centre for Science and Environment (CSE), a major think-tank on environmental issues in India. The first and second Environment Reports published by CSE in the early 1980s were translated in Hindi as Hamara Paryavaran and Anupam Mishra played a key role in this.  Later, he wrote his two texts Aaj bhi Khare hain Talaab (Ponds are still relevant) in 1993 and Rajasthan ki Rajat Boonden (Silver drops of Rajasthan) in 1995 and numerous articles viz. ‘Yamuna ki Dilli’, ‘Pralay ka shilalekh’, ‘Tairne wala samaj doob raha hai’, ‘Akele nahi aata akal’ and many more. His book on ponds is translated in 19 languages including French and Braille. More than one lakh copies of his book on ponds is sold and in13 languages it published by the National Book Trust (NBT). Both the books written by him are copyright free.

He won numerous prizes such as Indira Gandhi Paryavaran Puruskar in 1996 and Jamnalal Bajaj Award in 2011. He was invited to deliver TED lecture in 2009 and his 17 minutes long lecture titled as ‘The Ancient Ingenuity of Water Harvesting’ truly depicts his wealth of knowledge and sense of humour. The video has been watched 8.5 lakh times and shows its importance. To pay a tribute to Anupam ji, when I screened this video to my students in February, 2017 followed by a lecture on ‘Jal aur Mal: Raj aur Samaj’ by Sopan Joshi, its interdisciplinary orientation got a very warm response from the faculty across the departments. His works also played an important role in networking the like-minded people and organizations working all over the country. In last few years, when the organizations like SANDRP, INTACH and many others started organizing  India Rivers Week and constituted Bhagirath Prayas Samman to recognize the exemplary works done for river conservation, Anupam ji became part of this endeavor.

In my subsequent visits to GPF, I often met the farmers and activists who came to meet Anupam ji from different parts of the country. Through him, I got to know about the works done by Sachchidanand Bharati ji in Ufrainkhal village of Uttarakhand, Chhatar Singh ji’s works in the deserts of Rajasthan, Laxman Singh ji in Lapodia village (Rajasthan), Kamal Kishore ji (film-maker and journalist), Siraj Saxena (artist), Sopan Joshi (journalist), Farhad Contractor to name some of them. Later, I started putting them in my ‘Anupam Family’ since they simply enhanced the quality of my life in distinctive ways.

My last meeting with him was of merely twenty minutes at AIIMS in November, 2016. It was nearly a month before he breathed last fighting with cancer. He shared his helplessness, dependency on others and also the hope of leaving for home in near future. He was in acute pain and still asked me about the papers I was teaching at that time. When I mentioned the title of  the paper ‘Gandhi in the contemporary world’, he keenly asked about the syllabus of this course.  He also told, ‘you must share unusual things about Gandhi. For example, very few people know that he was ready to make Jinnah PM to avoid the partition of India’. He further said we are living in difficult times. We are moving towards narrower vision. Ideas move in waves – similar trends worldwide. We don’t have much of a choice. He also asked me to read Mrityunjayi, a collection of poems on Gandhi written after his death published by Sahitya Akademi.

He even asked me about Maanvi, my two-year-old daughter and with whom she stays when I am away for work. He said ‘children are always so cute. Even piglets are one of the best creatures’. Even from the hospital, he was editing Gandhi Marg with the help of his wife In his last days, Mishra was also editing some of the unpublished writings of his father Bhavani Prasad Mishra, a renowned poet. There was no pretense in his personality and he lived the Gandhian values in its true sense. He was a great communicator and used the words very carefully to leave an impact such as ‘GDP will not solve the environment problem’, ‘we must use the term ‘illiterate’ with a great sense of respect’. It is one year since he left the world but his words remain with us as a guiding force. 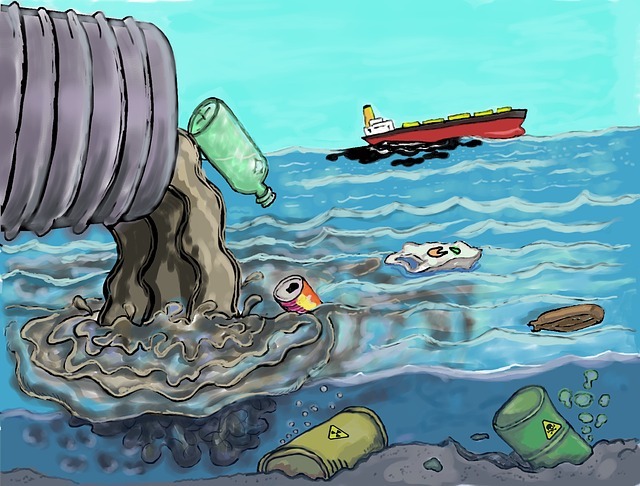 Water is Essential for life, But Are We Doing Enough to Check Contamination?

‘Delhi Declaration’ at desertification summit: So near yet so far

Rethinking UN Declaration for the Right to Healthy Environment