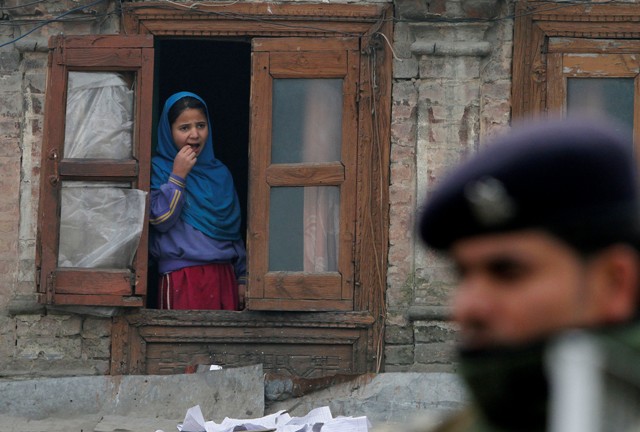 Jammu and Kashmir Coalition of Civil Society has release a report that states that 318 children have died in conflict-related violence in Jammu and Kashmir over the past few years. Does childhood have a meaning in such disturbed moments?

Ayesha Mustafa is a Writer and Journalist – based in Bhopal.

All of us would like to believe that childhood is a time when the mind is free from all tensions and the innocent bliss in what determines existence. The day long playing, the endless moments of laughter, the warmth of the guardians and the feeling of being loved that transcends all conditions. Childhood for most of us has been that time of our lives that we continue to hold dear for the rest of our time on the planet.  Have we ever asked what the children in war torn states of the world feel like as they grow up?

It is indeed an irony that we cannot enable our children to lead a life of happiness despite their geographical locations. Jammu and Kashmir for example is a state that has been affected for a large expanse of history with disharmony and unrest. A report brought forward by the Jammu Kashmir Coalition of Civil Society states that 144 children have been killed by the security forces, 12 have been killed by militants and 147 in unidentified encounters.

With the continuous unrest going on in the state more and more children are suffering. It is also paradoxical that the state of education and learning in the state of Jammu and Kashmir has also suffered to a great extent because of the on-going disturbance.

Educational institutions in the state are often used as military camps or interrogation centres and therefore the process of education has suffered. This deprives students of their right to education and also denies them the ability to get a qualification for later employment. It is for these reasons that the drop-out rate in the state is 55% in primary school and across the period of the conflict it is the educational system that has received the minimum attention.

Children in the valley are growing up in an environment where there is no peace and no happiness. People who live with them reiterate stories of troubled times and recount how peace looks like an alien dream. Our country should not force such innocent little children to continuously survive in an environment that alienates them and deprives them of the love and affection that they are meant for.

Education is of course an aspect that we have to reflect on and build up an infrastructure where children have the chance to attend school and acquire an education that enables the, to develop a meaningful existence.

The report has brought forward the troubles and disturbance that people in Jammu and Kashmir and children in particular have to pass through every day and how it is affecting their lives. With such high levels of drop-out and killings of innocent individuals, it is important that harmony be attained. Our children will determine the future of the nation as holistic community and their wellbeing shall be our concern.