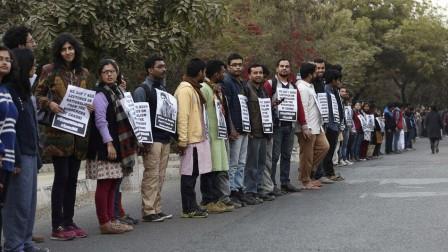 Public universities are significant contributors for the development of a nation. It is extremely necessary for governments to maintain quality and deliver the optimum through public universities for empowerment of people and the creation of a meaningful society.

Nivedita Dwivedi is an Independent Writer. She is working in the field of education and—based in Mumbai.

The recent strike by the students and the faculty of Tata Institute of Social Sciences (TISS) against the institute’s decision to withdraw financial aid to students from the Scheduled Caste and Scheduled Tribe communities, who were eligible for the Union government’s post-matriculation scholarship, is only a grim reminder of the state of flux that the higher education sector, especially the public universities are in. Even globally, there have been visible signs of tremors, with faculty and students alike, having to struggle for those very rights that were once ensured to them .

The rationale behind the establishment of public universities can be traced to the consideration of education, including higher education, as more or less a ‘public’ good. In fact, there can be said to be a global consensus around the fact that education is nothing less than a ‘Human Right’. The United Nations definition of the term ‘Human Rights’ confirms the same. It states, “Human Rights are rights inherent to all human beings, regardless of race, sex, nationality, ethnicity, language, religion, or any other status. Human rights include the right to life and liberty, freedom from slavery and torture, freedom of opinion and expression, the right to work and education, and many more. Everyone is entitled to these rights, without discrimination.”.

Various countries have tried to guarantee this right to education in their own manner and capacities. In India, the Constitution had mandated the state to guarantee to all, the right to education till the age of 14 years within a time period of 10 years, under Article 45 of the Directive Principles of State Policy. This mandate was only fulfilled in 2009, in a fairly diluted form, with the enactment of the Right to Education Act, guaranteeing free and compulsory education to children in the age-group of 6-14 years. The status of its implementation is worthy of a different write-up altogether.

I would like to argue here that a right to education only till the upper primary level is rendered more or less meaningless if there is not an adequate provision and guarantee of public colleges and universities for the students to continue their education in. Whereas the purely ‘public good’ character of education might be challenged when it comes to higher or university education, it cannot be debated that a suitable higher education for the maximum possible numbers is the most desirable state of affairs.

The Right to Education Act, 2009, not only provides for compulsory education for children in the age group of 6 to 14 years but also provides for this education to be free. With almost universal enrolment having been achieved, it can be ascertained that majority of the children can be assured of a schooling at least till Standard VIII. However, this achievement in itself only has a symbolic value. This is because it is not possible to completely divorce education from work and view them as independent entities, isolated from each-other. Although, I believe that to be able to earn a livelihood cannot be the sole aim of any education system, however, it is equally true that a good education sufficiently enhances the chances of an individual to be able to earn a livelihood. Schooling till upper primary level is of course not that desired level of learning which can enhance the prospects of an individual to be able to earn a decent livelihood. Herein lies the first major importance of higher education. Even though it might not be possible to guarantee a universal and free higher and university education, it is still essential that the opportunity to undertake good quality higher education be available on chargeable but ‘not for profit’ basis to maximum number of individuals, and thus the key role of public universities in this context.

India’s expenditure on education has been consistently lower than the world average. India has decreased its spending on education from 4.4% of GDP in 1999 to around 3.71%, as per the latest budget estimates . Although the 2017-18 budget has increased the allocation for higher education by about 10% as compared to the previous budget , a third of the budget allocation for higher education sector will solely benefit the IITs and the NITs, whereas the budget allocation for certain other institutes of national importance like the Indian Institutes of Science Education and Research has been reduced .

The above budget allocations are indicative of a worrying trend in the way higher education is increasingly being viewed and treated by the state. There are a few salient features that can be discerned in this regard:

These abovementioned trends do-not augur well for the future of higher education in India. As discussed above, good education is essential for an individual to be able to earn a livelihood. However, again, it is not and cannot be the sole purpose of education. Education plays a major social function in society. And herein lies the second major aim or purpose of education. These two major aims, I believe, need to co-exist and be given equal importance in any good and desirable education system.

Society is a collection of individuals and is built by the interactions of those individuals among themselves. Hence, we can establish that under no scenario can a society be completely unmindful of the behaviours of the individuals forming a part of it, because at least a subset of those behaviours will definitely affect the society. As a result, it would definitely be concerned with the kind of actions/behaviours its members are indulging in. Thus, a major aim of any education system has to be the nurturing of an individual who has a sense of life, a capability of realizing one’s potential, of defining a purpose for oneself and equally importantly recognizing others’ rights to do the same. This would require the development of an ability in an individual to define rights and wrongs for himself/herself, reason based on these rights and wrongs, make judgements according to them and finally act according to them. By their very nature, social sciences and humanities are better placed than core sciences, technology etc. to cater to the abovementioned major purpose of education, i.e., its social role.

However, the recent trends in the direction that our education system is taking, clearly indicate that the social role of education is being constantly relegated to the background and being increasingly looked at with contempt even. The authoritative manner in which the state has tried to bulldoze its way into changing the institutional character of JawaharL Nehru University is a case in point. An institute that is the best exhibit of the social role of education, with its culture of discussions, debates and dissents, its core strength of egalitarianism and inclusion, the unparalleled academic research that it produces, the freedom of thought and expression that it provides to all the stakeholders in its system, is being repeatedly and continuously targeted for these very reasons, for questioning and dissenting, for debating and discussing, for actually offering equal opportunities to all, irrespective of their social, caste, religious or any other such status in society, for being the fore-runners in understanding what education is and should be all about.

The unrest that is today clearly visible across public universities cannot be cut and divided into individual and isolated issues and then addressed accordingly. This unrest is a symptom of the bigger malaise that has set in the system. It is an indication of the even deeper malaise that inflicts the society at large and that is the global vision that the society has chosen to adopt for itself, a vision wherein human rights can be casually trampled upon, where egalitarianism is considered as a relic of the past and where economics trumps humanity, by an unbridgeable margin.