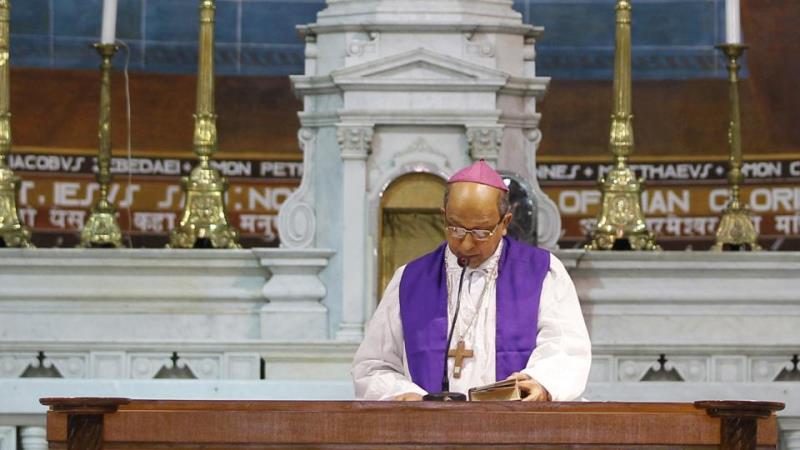 Here is a perceptive piece that takes us to the deeper layers of Indian consciousness with its multiple religious traditions.

Let the people of all castes and creeds, all denominations and persuasions live in harmony and peace, steering far away from hatred and violence. Protect our legislators as a place discerning minds. Keep our print, visual and social media as the channels of truth for edifying discourses. Protect our institutions from the infiltration of the evil forces.

See the insecurity of the ruling establishment. It feels threatened even if someone with the psychic vulnerability of being part of a minority community expresses anxiety over the possible consequences of the might of majoritarianism. There is nothing wrong if Delhi Archbishop Anil Couto  feels the need for a ‘prayer campaign’ for restoring peace, sanity and harmonic pluralism in our socio-political life; and he is of course right in reminding us of the ‘turbulent political atmosphere’ in the country.

Who can deny that we live in violent times? Who can negate the fact that in recent times there has been consistent attack on the minority communities? A political culture that normalizes cow vigilantism, lynching and mob violence needs to look at itself, and without self-critique it cannot generate confidence among all those who love to see the world beyond the paradigm of Hindutva and its discourse of militant nationalism.

However, see the way the entire ruling establishment came forward to attack Mr. Anil Couto—politically, psychologically and culturally. For Home Minister Rajnath Singh, there is ‘no discrimination against anyone’; for Mr. Amit Shah, ‘polarizing people in the name of religion is not appropriate’. What do you do? Do you laugh at their extraordinary capacity to transform lies into truth?  Do you see the closure of mind—their complete inability to accept any voice of dissent? Does it indicate the normalization of authoritarianism? What was really frightening was the way some news channels—pampered by the alliance of corporate capitalism and ruling political forces—interrogated Mr.Couto; for these over smart, yet naïve English-speaking anchors, Delhi Archbishop was no less than a notorious villain polluting the ‘sacredness’ of the Modi  government.

In this context, there are three points that need to be stated clearly.

First, Delhi Archbishop’s anguish can by no means be seen as an attack on Hindiism; it is not about Christians vs. Hindus. Instead, it is a reminder—a gentle, yet politically/spiritually mature reminder—that it is the  ethos of symmetrical pluralism that ought to characterize the fabric of Indian civilization known for its multiplicity of faiths, beliefs and practices. Moreover, many of us as Hindus do believe that the present form of Hindutva goes against the extraordinary elasticity of Hinduism, its beauty and freedom, and its ability to retain a thread of connectedness amid many sects, multiple modes of worship, philosophic systems, folk traditions, puranic beliefs and Vedantic revelations. However, Hindutva is based on insecurity; it fears the ‘other’; it tends to see itself as a rigid/ centralized structure with an ideology of culturally bounded nationhood with its inherent intolerance to pluralism. Hence, when Archbishop Mr. Anil Couto expresses his concerns, we understand it; never do we see it as some sort of ‘Christian conspiracy’ against Hinduism.

Second, secularism, as Gandhi’s life and practice suggested, does not mean atheism, even though atheists are always welcome, and free to live with their worldviews. Secularism is the profound art of spiritual oneness—the maturity to realize that, despite multiple forms, rituals and practices, we are all one. Secularism, because of its very nature, promotes a culture that encourages empathy, sensitivity to others and constant dialogue. Moreover, secularism unites rather than divides; it brings a scientist and a mystic, a poet and a technocrat, a sufi and a baul, and Jesus Christ and Ramakrishna together.  This is the dream of Indian secularism—its ultimate utopia. For this dream, Gandhi became a martyr. However, today this dream seems to be crumbling. If we look at the entire world, we witness diverse forms of obscurantism and orthodoxy—suicide bombers intoxicated with death, Islamic fundamentalists refusing to believe that the world is too diverse and complex to be transformed according to their wish, and violent/orthodox Christianity with its own story of domination and colonial urge to ‘civilize’ the world. And ironically in India too with the rise of Hindutva, we experience the similar trend. It kills the spirit of Gandhi and Ramakrishna, Kabir and Narayan Guru. It is narcissistic and recklessly intolerant. It is bound to make the likes of Mr. Couto apprehensive.

Third, for restoring the spirit of the true spirit of secularism and spiritual oneness, every group has to play an important role. Of course, Hindus have to play a significant role. They should always realize that if they feel tempted to carry the arrogance of majoritarianism and become indifferent to the minorities, it would do a great damage to the ethos of our civilization. Let the inherent elasticity within Hinduism prevail; let it remain oceanic. Likewise, Muslims, Christians and other minorities too have to play a significant role. Can they see themselves beyond the stigma of victimhood?  Can they see themselves as equal partners in this project of collective redemption? Can they also appreciate the beauty in Hinduism? Essentially, we need to overcome all sorts of exclusion and ghettoization. Living together, participating in our rituals and festivals, sharing pain and happiness in our inclusive neighborhoods, opening the windows of our minds always open—these everyday practices alone can enrich our secularism, and make it different from the bureaucratically designed ‘official’ secularism , or the high academic ‘secular’ discourse of the India International Centre variety.