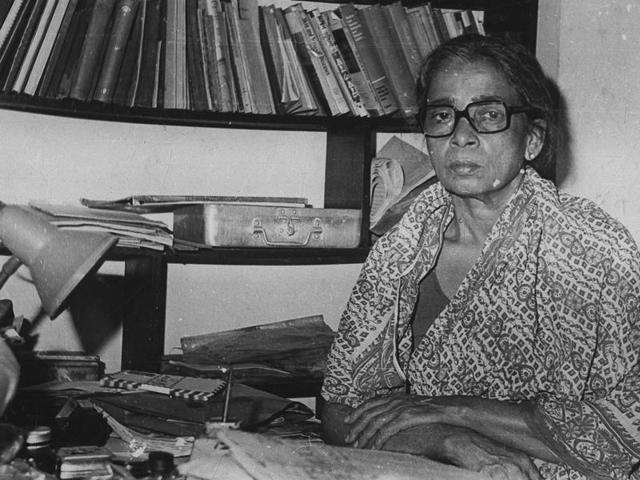 We see examples of intolerance, dominance and exploitation all around us, reminding us of the significance of Mahashweta Devi’s work. Perhaps things are not too different even years after independence for the marginalized and this is what makes Mahashweta Devi resonate the aspirations of the society.

The well-known activist and writer Mahashweta Devi passed away in July 2016. At the age of 90, after living a rebellious and creative life of resistance she left us by leaving her great works. She always gave voice to the tribal, villagers, women and their protests and movements. She was born in 1926 and left us on 28th July 2016.

She gave her whole life to fight against violence, exploitation and oppression. Before knowing more about her, I had read her breast giver story in our sociology course and had watched Hazar Chaurasi Ki maa (the mother of 1084) movie. The movie is a good work of Govind Nihalani which provoked me to search more about Mahashweta Devi.

In 2016, just after the day of her death I remembered that I had given a gift to my sister some years back and that was Mahashweta’s story collection “Eent ke Upar Eent”. It’s a collection of four stories “Bayan (statement)”, Shaneechari, Rajabasha ki roopkatha (beauty-tale of Rajabasha) & Eent ke Upar eent (bricks over bricks). I started reading that book and found that Mahashweta has revealed the reality of so called civilized people and raised voice of oppressed people. All four stories give details of extreme level of exploitation in Tribal villages. The story Bayan raises a question over our administration and police system. What a tribal villager will expect from police? Do police helps them? What are issues of exploitation? Who runs oppression and who supports? These are questions which we discuss from examples. Thanks to this book that I read more works of her to see her resistance against exploitation and this search continues. Here, I will give glimpses of her works “Eent ke upar eent (Bricks over Bricks)”, “Hazar Chaurasiwen ki maa”, Agnigarbh, Draupadi and M. W. Banam Lakhind (Minimum Wages vs Lakhind) and try to explore the deep meaning and issues mentioned and hidden in the stories.

Goons left a tribal girl under the custody of police officer where the officer said the he wants to take statement of that girl. A goon suggested police to take statement by tying up her hands, and said that his friends several times took her statement. Then inspector, head constable all took her statement whole night. Actually, taking Bayaan is new name of legitimate official rape in that regions. This is the example of exploitation which she raises in her stories.

Josin goes in the search of work, she knows what will happen with her but away from the burning forests, leaving her favourite Saal trees away. She also became victim of exploitation of businessmen of bricks. Where many girls either died in the pain or became part of that market. What if a tribal girl even commits suicide? Nobody cares for her. The police and administration all are with the businessmen. They reap their profit form hardwork and exploitation of workers and they don’t care about what is Josin type girls’ desire and ambition. For them no value of Josin’s desire to go back to the forests of Saal to celebrate Saal festival, to be lost in the smell songs of her soil. For them only her body is useful which cannot become free from their grip.

Similarly Josmina and her relatives can also just cry, weep and fight on their status. From one to second, second to third, and how many traps they will break and run away? They asking this question from society. And more than that the fear of removal from the community after the “touch” of several unknown men, fear of people’s taunt on her husband and her, left only two ways either take arms against exploiters or die peacefully. And then Josmina’s decision to sleep peacefully in the water of Koyna River and to leave this exploitation driven society on which Shaneechari had already pointed her finger and blamed society and everything for her situation. But Josin? She was a sharp girl but she also dint find way to get away from traps of exploiters. Perhaps she would have had thought that who is the reason of all which happened with her. Her body, poverty or her identity of a tribal girl.

Mahashweta’s stories highlight different issues combined with each other such as gender, class, corruption and many more.

Hazar chauraseewen ki maa (Mother of 1084) shows not only story of a mother of Dead revolutionary but gives insights on a middle class mother, wife of a patriarch husband, a lady struggling with her own identity and people who are her won but very far from her. How she struggled to accept that her son is not alive and his crime was that horrific that not even his father and brother tried to remember him but all those people who lead the oppression of marginalized enjoy their positions in society. Others like her corrupt and unfaithful husband, her elder son, daughters and daughter in law and others are the so called civilized and good people of society who have nothing to do with society but Brati was a criminal who always thought about change and fought against oppression.

Though Mahashweta was talking about period of Naxalite movement of 70s in “Mother of 1084” but still if we observe we can find lots of Bratis and their mothers. Lots of Nandinis fighting against oppressions and facing penetrating lights on eyes and other humiliations just for raising voice against injustice. Today the culture of silence is dominant among people and the situation is same when anybody questions the state can easily be labeled as anti-national or Naxalite.

In addition to the mentioned pain of a lady, a mother and a wife in “mother of 1084”, in Agnigarbh she shows us different faces of Tribals struggles by the examples of living phantom revolutionary Basai tudu who became a headache for police and administration. The independent and strong Basai who made a horror for the landlords and oppressors in forests was very upset from the party politics in his party and was not interested in mobilization and then by his (Basai) way she criticized leadership issues in parties and made his own way.

“Draupadi” story gives a strong notion on the state led oppression and exploitation. How that woman was just a sex object for security persons. Especially the revolutionary and rebel women who question the system of oppression are soft target for “legitimate” sexual oppression. The bold and strong character of Draupadi who denied wearing anything and went in front of the boss of those who raped her whole night. I am not saying too much about it as Gayatri Spivak’s write-up on the story is easily available from online sources to explore this piece’s importance. In story M W vs Lakhind she shows the oppressive and exploitative regime of states where an officer cannot do anything even if he wants to do. As that Dalit and born poor inspector was trying to do well but the all his efforts were failed because police and policy makers gave support to greedy owners.

Mahashweta Devi is a voice of marginalized sections and her stories and novels  mainly showed us the ugly truth of the so called civilized society. Those who think that Mahashweta was biased towards some thoughts should read her stories and identify that she has criticized almost all members of the system including political representatives and so called progressive revolutionaries and congress to communist parties’ members and other groups who directly indirectly oppressed and exploited Tribes, farmers, etc. her work is also important for understanding intersectionality among groups.

She was a consistent worker against discrimination and oppression and all her stories mainly raise issues of marginalized sections of society. Today when we see that the governments are changing but exploitation and the pattern and intensity of hate crimes, developmental displacement and conflict is still high. She is not alive for creating some more thought provoking stories but her work is always with us to motivate us against exploitation of marginalized sections and to oppose any injustice in any form. Today authors should take such initiatives to speak the problems of people by their writings and I think Mahashweta will always motivate us.

By the help of these stories Mahashweta shows us other side of the civilized society, other side of the administrators, police and government. She, in her own style raises a question that who is responsible for the unrest in the tribal belts, forests and riversides. Mahashweta countered from her writings, this hypocrite and corrupt society. Her writings sometimes give shock, pain, sometimes fear and sometimes shame on ourselves. It also provokes us to think what is the status of tribes and people who are fighting for them, for them in Chhattisgarh, Odisha, and other states? What about their rights?

Do we really care about this side of developments away from the posh colonies and roads? Mahashweta had spent her time with tribal people and understood and participated in their struggle and these stories and their characters are not merely fictional. They are part of that struggle, their replications we can still find in the villages where police atrocities, industrial hooliganism is still alive.

By Hazar Chaurasi Ki Maa, Rudali and such all creations Mahashweta’s writing will always fight against exploitation and give a space for dissent and resistance to us. Last year she left us but whenever we will talk about writing of resistance and protest, people’s struggles and tribal exploitation we will remember Mahashweta. And that’s the importance of her writing that she talked about those who are away from the mainstream nationalism shouting media stories. Today when we see examples of intolerance, dominance and exploitation it’s important to see Mahashweta’s work. Perhaps things are not too different for tribes and neglected informal sector laborers, peasants and other marginalized sections from the period of Mukti Dashak.