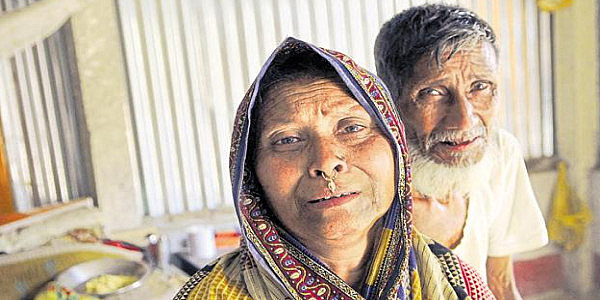 Assam is on a threshold of a crisis. Fear, insecurity and trauma engulf the landscape. Several persons are detained in jails including poor and illiterate women who are branded as foreigners. It’s a simmering crisis which may blow up if the political class, civil society and the higher courts do not intervene for justice, rationality and harmony.

Assam is on a threshold of a big crisis. Fear, insecurity and trauma stalk its beautiful and green landscape, especially in the remote interiors in lower Assam, in the Barak Valley, and elsewhere. Tens of thousands of the poor and illiterate, deep inside villages and small moffussil towns are directly affected trapped between helplessness and hopelessness. It’s a simmering crisis which can just about blow up if the political class and civil society, and the higher courts, does not intervene for justice, rationality and harmony.

History seems to be yet again repeating itself in Assam. The nightmares of the Nellie massacre of February, 1983 still stalk the land. So who is a bonafide Indian citizen, and who is a foreigner? Whose documents are valid, and whose are fudged? How many bagfuls of documents are required as evidence to prove one’s social and political identity?

So how come one brother is an Indian, while the other is a foreigner? Or, ‘Doubtful Voter’ – ‘D-Voter’ in official nomenclature. That is, a man or woman who cannot vote, who does not have fundamental constitutional rights, whose case is under scrutiny, who must prove his bonafide credentials, and who can be packed off to a jail/detention camp branded as a ‘foreigner’. Either way he or she is condemned.

So what do you say about an elderly mother who has been packed off to a jail/detention camp, while her three adult sons are voters and Indian citizens? Is she a foreigner? The Assam Border Police and the Foreigners’ Tribunal think so. So in what way can the elderly mother prove that she is an Indian citizen, even as she rots in a jail?

There are 100 such Foreigners’ Tribunals which finally reports to the on-judge Divisional Bench of the Guwahati High Court. Locals and activists allege that they have been allegedly filled with officials, many of whom have tacit or overt sympathies and loyalties to the BJP-RSS and AASU-AGP. They believe that the process to identify foreigners under the National Register of Citizens (NRC) under the Supervision of the Supreme Court is a good move, but there are problems on the ground. It can also be used with bias and prejudice, with fudged evidence, with officials who are unfair and impartial, and with loop-holes which is leading to grave injustice – and with no resort to justice. This reporter witnessed case after case of lopsided implementation of the registration process in the districts of Goalpara, Barpeta, Kokrajhar in lower Assam.

Kulsan Nessa from Jaipur Village in Barpeta district has been in the Kokrajhar jail/detention camp for women for three years. All her adult sons are voters and Indian citizens, they say. The eldest, Abbas Ali is almost 30; other two sons, Sarvesh and Garbesh, are in their late 20s. Her husband died of trauma, her neighbours allege. So why is the mother in jail as a ‘foreigner’ when her sons are Indian citizens? “Even dogs can’t eat the food she is given in jail,” said her son Abbas. “Our family has been ruined.”

Abdul Talukdar of Kolgasia village in Barpeta district was a senior clerk in a government college. He was a voter till 1997. Suddenly, after that, he was declared a ‘D-Voter’ with no voting rights. “I did a government job from 1982 to 2016. I have been given a senior citizen certificate by the authorities. I have been given a permanent resident certificate by the Barbeta District Collector in 2018. I get pension. And, yet, I have been declared a D-Voter. I am condemned as a non-Indian,” he said.

Panchanan Ray, in the interiors of village Anchorbari in Chirang in Kokrajhar district, is old and suffering. He is a Rajbangshi Hindu. His wife, Anabella Ray has been picked up and packed off to the women’s detention camp in the Kokrajhar Jail. Both of them have been voters for years and have documents to prove that, he says. So how is it that the husband, a senior citizen, is Indian, and his elderly wife is declared ‘D-Voter’ and foreigner?  And why is a doubtful voter condemned without being given a chance to prove his/her documentary identity?  “I am a Hindu. A original inhabitant. So why have they put my wife in jail,” he asks, grief-stricken.

Hori Das, a Bengali Rajbangshi Hindu, has been declared a ‘D-Voter’ in 1997, though all his documents are in order. He says he has voted in the past. His brother Buddeshwar Das too has been declared a ‘D-Voter’. Both are fishermen in Balabite village in Goalpara district and seem totally lost – their fundamental rights are at stake. They hold their documents close to their bodies, ready to prove their identity to any ‘outsider’ who comes by. Following them are many others, clutching onto a straw in a flood of hopelessness. “Tell me, how do I prove that I am an original Hindu resident of Assam?”

Rajbangshis are documented as original inhabitants of Assam. They are mostly poor and seek a scheduled caste category. It is quite possible that since the two brothers changed their surname to ‘Das’ to get a SC status, they have been debarred.

In any case, change of address or names, or technical changes or anomalies in documents, are rampant leading to mass chaos. A villager might change his village, or his village might have submerged decades ago in the annual floods ravaged by a fiery Brahamaputra river, or his village might have suffered erosion – so his original address in the revenue records are termed as suspect by partisan officials and the police. The village might exist in forgotten revenue records, but the village has geographically disappeared. Even surnames change after marriage, especially of women, and so does their homes and village addresses, and due to lack of documents, they are often condemned as foreigners or ‘D-Votters’. A ‘Begum’ can become a ‘Khatun’ – hence she is already suspect. Activists say certain biased officials and cops are intentionally using such historical and social factors to brand people as foreigners.

Zakir Ali, a raj-mistry, skilled construction worker, from Ward Number Four in Howly town of Barpeta, is in  jail for the last three years. His brother Bashir Ali is an Indian citizen. His wife, Zaigun Nessa, with her three daughters and a son live in abject poverty in a thatched house on someone else’s land. One of her daughters, Asmina Khatun, has dropped out from Class 9 of the Howly Girls School. Her son, Sharif, 17, works in a plywood factory in Kerala. The family cut suparis for a living. “It is impossible to live like this,” she says, tears flowing. “What will happen to my children?”

Many are detained in jails, especially poor and illiterate women, and branded as foreigners. Women, including mothers and grandmothers, are suffering. Families are breaking up. There is mass fear of ruined family life. Many women them have no birth-certificates, no school certificates, not even voter identity cards. The Supreme Court has allowed the Panchayat Certificate which has magisterial sanction as a valid document, but the local officials often do not accept it. Thousands of women are under stress.

Those in detention camps – around 1000 — have no prison rights, no fundamental rights, no legal rights – the jail is called a detention camp. Most of them are poor and illiterate Bengali-speaking Hindus and Muslims.  “A D-Voter is an Indian citizen till proved otherwise. They cannot be arrested or put in jail.” said Shahjehan Ali, president of the Goalpara Bar Association. “This is illegal.

Accusation of racial, religious and linguistic profiling is widespread. The NRC could have been a useful process to identify foreigners who have arrived after 24th August, 1971. This would have cleared doubts about both Bengali-speaking Muslims and Hindus, among others, who have arrived before the cut-off date in 1971. However, the implementation is being seen as ‘chauvinist, prejudiced, biased and revengeful’ by vast sections of the minorities, including Bengali-speaking Hindus. Poor and illiterate women are being targeted in thousands, say activists. The intention of the ruling regime is not ethical, argue locals.

“I don’t think there are anomalies in the NRC process,” said former chief minister Prafulla Mahanta to this reporter in Guwahati. “However, there can be certain officials who are making mistakes.” Both AGP and BJP are backing the NRC.

“The people will fight back. This is grave injustice. Don’t underestimate the power of the people. Don’t hound them,” said former Chief Minister Tarun Gogoi, in an interview with this reporter. He said that Narendra Modi had promised to deport Bangladeshis in his election speeches before the assembly elections in 2016. “Has even one of them been deported? Instead, innocent Indians are being hounded,” he said.

In the last NRC report released in December 2017, 1.9 crore of 3.29 crore applicants have been declared as citizens. The second and final NRC draft was meant to be released on June 30 under the supervision of the Supreme Court. It has been postponed due to floods, according to the authorities. Sources claim that the authorities are just not able to cope with the complex, gigantic and difficult task – especially with allegations of partisan behavior and stark inefficiency floating all over. Thousands have not got written notices and thereby were not able to attend the hearings. Most poor and illiterate people in remote villages have no access to internet. Those who don’t attend hearings can be arbitrarily declared D-Voters or foreigners. It is a dead-end and a trap for the condemned citizens. Unofficial estimates claim that 35 lakh people might be affected.

The AGP is vehemently opposing the Bill which is being backed by its ally BJP, who is looking at a potential vote-bank both in Assam and West Bengal. Prafulla Mahanta told this reporter that the AGP will “break the alliance” if the BJP backs the Bill. There was a big protest rally in Guwahati on June 29 and across Assam on the issue led by AASU and AGP.

Assam is on the brink. Between the NRC and the Citizenship (Amendment) Bill, between bonafide Indians and illegal foreigners, and between good intentions and partisan agendas, it is a Catch-22 situation. The crisis will only multiply in the days to come, according to ground indicators.