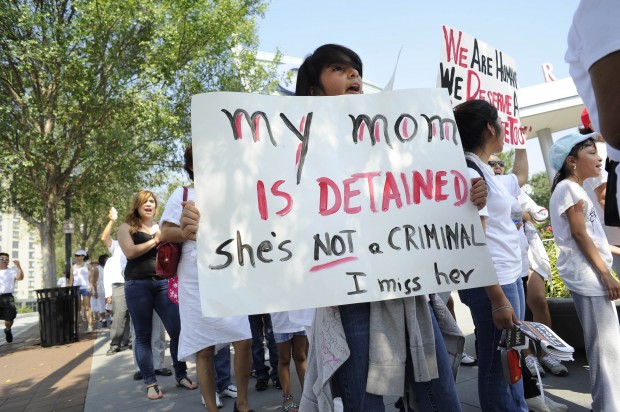 Illegal immigration is not a country specific problem and cannot be seen in isolation. The root cause is the growing inequality in the world which leads to such dire living conditions for a substantial population of the world that they resort to any and every means possible to simply be able to continue to survive.

The world has, of late, been grappling with the worst kind of humanitarian crisis. As a part of its ‘zero tolerance’ approach to illegal immigration, the United States of America, had, in May, allowed the filing of criminal charges against undocumented immigrants. This led to separation of nearly 2000 children of these immigrants from their parents in a matter of just six weeks.

Patriotism cannot be our final spiritual shelter; my refuge is humanity. I will not buy glass for the price of diamonds, and I will never allow patriotism to triumph over humanity as long as I live.

Horrified by the implementation of these completely inhumane orders, there has been a wave of protests throughout the world. The protests intensified further after an investigative news website, ProPublica, released an audio recording on Monday, of the separated immigrant children crying inconsolably for their parents, at a detention center on the US-Mexico border. President Trump’s wife and daughter joined in the protests to end this humanitarian crisis.

President Trump has now signed an executive order to not separate the detained immigrant families. Although this comes as a major immediate relief in the present circumstances, however it still leaves many questions unanswered. The status of the children who have already been separated is still unclear. Further, it is still not known that for how long these immigrants can be held up and detained pending the ongoing proceedings against them.

The United States has recently also withdrawn from the United Nations Human Rights Council charging the organization of hypocrisy, since it had condemned the above mentioned US policy and charged it of gross human rights abuses because of this policy of separating the children of immigrant parents from them. As ludicrous as this denunciation of the UN Human Rights Council sounds, coming from the United States, whose human rights records have never been a matter of pride, it remains to be seen how the accountability of the human rights excesses that have already been committed in this matter, will be fixed and by whom.

However, looking at the macro issue of illegal immigrants throughout the world, it will be beneficial to all if a framework is arrived at through mutual discussions and negotiations among the world community on how to approach this issue in a humanistic manner. Illegal immigration is not a country specific problem and cannot be seen in isolation, by removing it from its context and completely overlooking the reasons for it. The root cause here is again the growing inequalities in the world which lead to such dire living conditions for substantial population of the world that they resort to any and every means possible to simply be able to continue to survive. This issue is not simply a mathematical issue of numbers, wherein nations start to drive out excess number of people from their soils without paying any heed to the social realities that force these people to resort to such practices in the first place.

Illegal immigration is a systemic as also a system and policy driven issue. The victims of the system are portrayed as criminals and punished harshly for their alleged crimes. Such harsh measures as adopted by the United States of America may appear to be a solution in the short term but are completely unsustainable on a long-term basis in view of the humanitarian concerns.

The Chaotic World of Immigrants and Nation States

Whenever one faces a dilemma of a choice between humanity and maintenance of the boundaries of the nation-state, or in other words, a dilemma between what the choice should be – humanity or patriotism (one’s commitment towards maintenance of the sacrosanct nature of one’s nation), it will not be difficult to arrive at the right decision if Rabindranath Tagore’s words are kept in mind:

“Patriotism cannot be our final spiritual shelter; my refuge is humanity. I will not buy glass for the price of diamonds, and I will never allow patriotism to triumph over humanity as long as I live.”

However, this is an adage which has been long forgotten. In today’s world, patriotism trumps humanity by a huge margin.