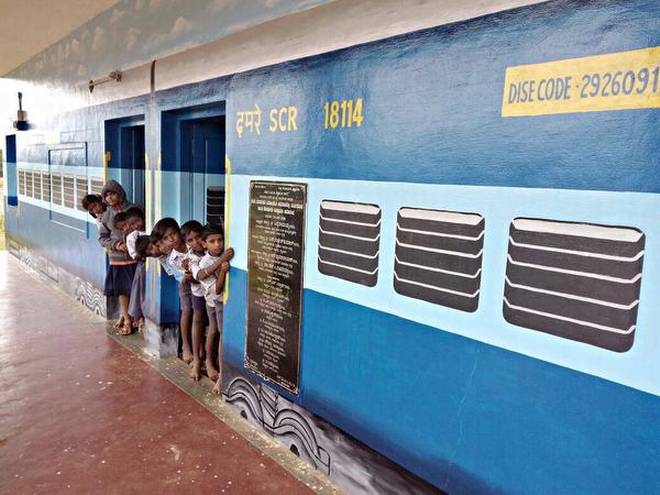 Teachers from a remote school in Haropura, Mysuru have taken the initiative to transform the school building into a train like structure attracting students like a magnet and thus resolving the problem of dropouts.

Ritika Maheshwari is an educationist based in Mysuru.

The issue of school dropouts and low attendance is faced by many schools in India. The children refuse to attend school due to losing interest or other structural reasons like poverty and lack of farm help that compels children to assist parents on the farm or in other occupations that they may be involved with. The dropout student finds it challenging not only to get an education but also to negotiate with the reality of having to leave his/her schooling at critical junctures of life.

Dropping out of school or not wanting to go to school is also entrenched in the mechanism by which school in conceptualised by many persons in the society. Children may be fearful of teachers, hesitant to attend examinations or shy to express themselves in public moreover school related stigma like the scar left by being ridiculed/punished by the teacher in front of other students etc. may also be one of the causes for not wanting to attend school. A government school near Mysuru recently reinvented itself to attract students when it realised that many children dropped out of schools due to loss of interest.

The issue before the teachers and school management was how to attarct children to the school and ways by which school could be turned into an innovative space for them. The Government Higher Primary School, Haropura has transformed itself into a train coach looking structure that has successfully won the hearts of its students who now refuse to abstain from school.

The government school earlier experienced massive dropouts and the children would refuse to come to school but after the reinvention, children flocked the school and relished the experience. It is due to the school’s headmaster and three teachers  that the building of the Government Higher Primary School at Haropura, a remote village in Tayooru Gram Panchayat, has been painted to look like a train coach.  It must be noted that many children from this remote village have not seen a train in their lives and ever since the school was painted like a train the children have been enthralled by it. The children feel that they are studying inside a train and this is an extremely exciting experience for them.

Mr. Basavanaik and teachers Doreswamy, Tarannum and Netravathi spent ₹25,000 from their own funds to paint the three-classroom building like a train coach. They hired two artists from Mysuru for it. The school has a total strength of 55 students studying in classes 1 to 7.

The village is so remote that it does not even have direct bus connectivity and within these circumstances the changes that the teachers have made to the school are really worth appreciation.  We are living at a time when government schools are facing heavy competition from private schools as parents from even lower income groups desire to send their children to private schools. The school in Mysuru also experienced this issue and began losing its students. The efforts made by the teachers to save the school have attracted the attention of the Education Department.

The school teachers and management desire to attract more children to the school from neighbouring villages and through their perpetual initiatives transform the school. In an age where private schools hegemonize the education landscape and government schools face immense hardships- the efforts made by the teachers at the Mysuru School are admirable

The children who did not like to attend school have now been pulled back into it and learning has become an enriching experience. It may be said that painting and renovation are not the best answers to the issue of dropouts but what has to be acknowledged is the fact that in the remote village, the initiatives taken by the teachers are brave and a beginning of a new journey of renovation.

Dead Mouse or Dead Ethics: Why is the UP Government Feeding Poisoned Food in the Garb of the Mid-Day Meal?

School exclusions and knife crime: why we should be listening more to vulnerable children

The Kashmir Lockdown and its Implications for Millions of Children