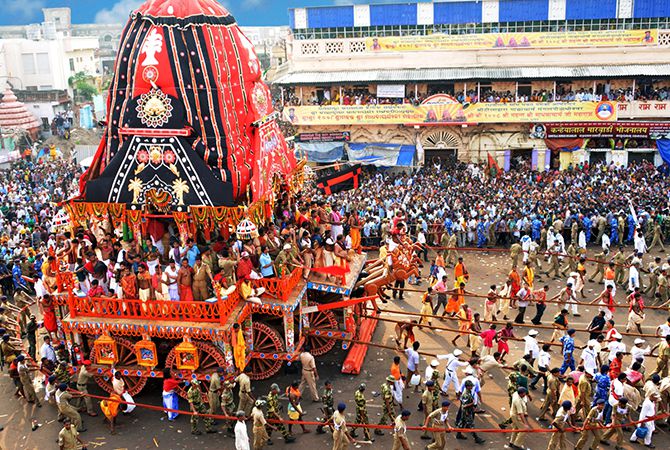 The Jaggannath Rathyatra is a traditional cult associated with Odia identity. It symbolizes the time of carnival and celebration where the lord travels on his decorated chariot blessing devotees.

This 14th July 2018, the Rathyatara day, social networking sites and WhatsApp inboxes of every Odia were filled with photos from the celebration of the well-known chariot festival from across the Globe.

All Odia’s persons take pride in the Jagannath cult that constitutes the core of their ethnic Identity and now has its worldwide presence and is largely celebrated by the Odia diaspora communities, more importantly by foreigner’s through ISKON.

A needless vanity that their God now has become the lord of the Universe prevails among the community. A post-colonial society having an eternal weakness for the foreign tag of legitimation, no wonder recovered its legitimation crisis by asserting itself through an inflow of images. It is no wonder, though very hard to accept, Rathyatra, is becoming yet another spectacle in this market obsessed, fad loving and consumerist world at home and outside.

We live in a strange time; consumption the biggest idol, next to rapid techno(De-humanization), loneliness, extreme sense of narcissism, sadism , individualism and greed. This newness in our life has transformed everything; the way we engage with people, god, religion and nature. We have now come to a point where consumption of religion and god in its lowest denominator is seen as a means for our instant problem solving. A Cadbury Chocolate commercial shows how a child religiously asks for a latest Cadbury chocolate to God and God fulfills his wish.

Now religion, faith and God with its market form have become an ideology, divorced from its original and authentic form as faith. We have incorporated too many of our own images and market images into the imageries of God. Our playful and dancing life affirming Gods are now filled with our own anxiety, fear, greed, enmity, aggression, hate and sense of narcissism.

We have made personalized Gods. For example look at the latest images of Lord Hanuman (angry hanuman) on the backside of cars which look so violent and aggressive. Look at puja pandals; our newer imageries and idols of God. Once innocent, childlike gods have been completely transformed.

The change of images talks lot about our self and our present. TV serials having their Bollywood and Bahubali versions of Gods and Goddess. Our engagement with God, religious activity has acquired a character of instrumental and instant gratification. And prayer, which is the only medium through which we connect to God, has become ‘an act of begging, complain and wish for more’ as one mystic philosopher would say, instead of ‘thankfulness, gratitude, fulfillment with all that we already have-life, love, health, relatives, friends, home and abundance of nature’.

Religion and God have become a means to our other instrumental end; endless greed driven consumption and buying, more comfort, love for power, domination, control, distinction and division.  This is the socio-religious condition we are living in. Any sane discussion and reflection on present condition of our religious activities and religion as an institution must begin with this self-reflective note. Reflexive and critical is the first foundation of a rational faith and antidote to anything related to irrational faith.

Beyond this meaning of religion, where God seems to acquire character of an ideology and propaganda, there lies yet another meaning of religion and everydayness of god, and its religiosity whose core is faith. Which is practiced by all ordinary people in their religious everydayness; with their creative and productive possibility, their toil, love, prayer, faith, hope to realize them in the image of God and Godly energies.

With no hesitation, one would accept that Jagannath Cult and Rathyatra constitute the core of odia ethnic identity. It is overwhelmingly present in all of us ;as Odia both postitvely and negatively.

As an Odia, born in the eastern part, where Jagannath cult has its over arching presence in every aspect of life and culture. It is not doubt we grew up with the faith that jagannath as our supreme manifestation; his myth, stories, narratives had overwhelming presence from school textbook, to essay writing in exams, Hari katha to Sobal Grand Pa’s unending stories in late evenings. Beyond Brahmanic monopoly of knowledge on Jagannath, every resident odia in some form or other is a expert on Jagannath. For people like me who grew up as a Child in 1990, where odia society yet to open up to the liquidity of spectacle of  Global Capitalism , Religious festivals of Jagannath acquires special importance; occasions of celebrating playfulness of childhood beyond the disciplinary time table of school; taking off from School, sports tournaments, meeting friends, joining relatives, going to theaters(yatra).

Two such occasions of celebration of Lord Jagannaths everydayness which deeply associated with every odia  who associate with this cult is Devasna purnima( Bathing Ceremony, the birthday celebration on the fullmoon day), and Rathyatra(Car/Chariot festival). Its significance is that the God appears as a traveler, comes out of the sacred, suffocated and exclusive place of temple to the mundane and open, to be amidst devotees. Like every ordinary human being, he undertakes a journey to his birthplace; Mousi’s( Maternal Aunt) home. That becomes the occasion for celebration for all those who wants to accompany him in this journey; for them it  a pilgrimage, to spent some time with their higher self, God himself.

This  festival is held on Asada Sukla Dwitya i.e second day of bright fort night of Asadha(June-July) every year  in Puri as epicenter and every corner of odisha, now across the Globe.This festival is also known as Sri Gundicha Jatra and Ghosa Jatra. As per the preveling traditions,history  Gundicha is the queen of Raja Indrayumna, the legendary builder of the first Temple. She had initiated this grand festival.

Hence this festival is known after her name. It is said that Sri Gundicha temple was the place where lord Jagannath had his first manifestation in the present form and thus is the birth place of Lord Jagannath. On this day, the deities are taken from the temple and placed in their respective Rathas(Chariots),

After the deities are seated on their respective rathas ,the  Gajapati Maharaja in case of puri and other state heads in other places sweeps the flores of the three Raths with the sacred Ganga jala and golden broom. After the purification of the raths then a puja takes place on the rathas ,then after people are allow to pull the the raths with ropes. Millions of people comes to see lord jagannath and pull his raths all over from the world. The act of pulling Rath and seeing the God on this occasion  accompanied by a strong  faith of experiencing  purnya (Virtue) which will help a person to liberate from this material world to a transcend world. Every act and related thing endowed with a divine and religious significance, guides all believers of this culture.

This is the only day the Lord comes out of his exclusive confinement of Brahmanical monopoly, and defy the politics of Caste and Religion (which is a hard truth of this cult) to bless the non Hindu devotees and Untouchables who otherwise cannot have an opportunity to see, worship and touch the gods and goddess in the Temple and to prove that he is the God of Everyone, caretaker of the Universe.

This is an ordinary everydayness in God’s annual calendar; however it has extraordinary significance to Odia identity and its ways of life. In the month of July this 10 daylong celebration of Rathyatra is usually the most vibrantly celebrated time of togetherness for every Odia family. It has continued to remain the annual spiritual renewal of Odia ethnic Identity, society and culture. Jagannatha cult and its religious and humanist ethics has been remain one important framework of orientation (as rationally and irrationally) to all those who adhere to this faith system; largely costal Odias.

As empirical examples of many cultures from different part of the world reported  by Social-cultural  anthropologists  and analyzed by sociologists and  social psychoanalysts  shows  that religion has always been for most cultures a powerful orientation governing everyday affairs of individual and groups.

One’s striving for religion, god, and solidarity with others manifested in the act of everyday religiosity, has always remained what social psychoanalysts calls our most powerful religious needs, one of higher existential quests which is deeply rooted in the character structure of human beings as part of their wish for living and avoiding isolation.

Therefore any religious act small or big represents this life affirming power endowed within human beings and manifested in what Erich Fromm calls our act of love, care, justice, reason, freedom, creative/productive power. And the presence of God and Godlike manifestations in every religion, as Fromm would inform us represents this eternal longing and image of human beings higher self, as symbol of what human species is potentially capable of; the highest good or highest value.

In A truly religious society, all these elements exist in harmony with other social activities and ways of living which affirms, consoles, encourages, relates and provides faith and hope to realize one’s inner and higher potential. If we take the example of Krishna as a God, Krishna as a man in Hindu faith system-he provides this frame of orientation and religiosity to live life as play; with his complete humanly and Godly manifestation.

Lord Jagannath in Odisha’s culture also represents the incarnation of Krishna, in his playful religiosity; he also nurtures this frame of orientation and love for life for millions of those who have faith on his divinity and cosmic power, which helps them to affirm their life.

Rathyatra-celebration of God Jagannath, as a metaphor represents his humanly and this worldly playfulness, journey and positive orientation to life. This carnival also represents the annual Yatra, an easy orientation to life of people who live with faith in all ordinary things of life and giving them extra-ordinary meaning. It’s a yatra, vibrancy, playfulness and ecstasy and spirit of Odianess. The God and the chariot become the metaphors. It is actually the annual journey of Odia collectivity, faith to dance with the playfulness of the cosmos, dance of rain, seasons, creative and productive power of earth and energy.