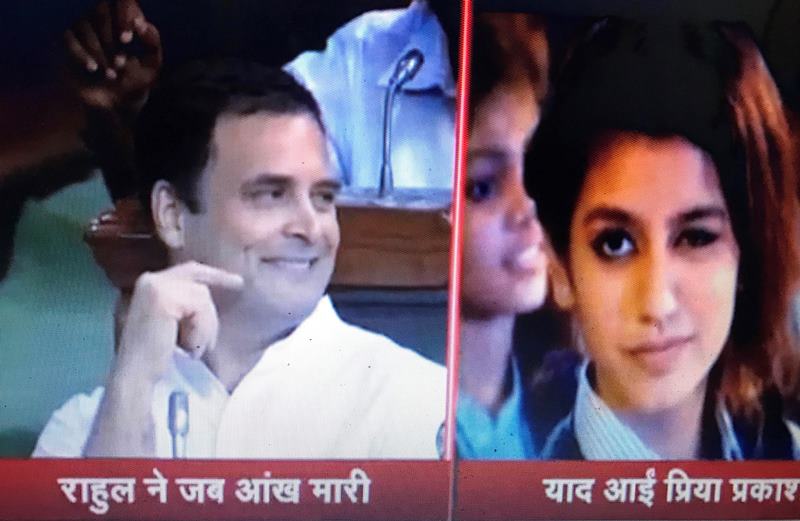 The No-Confidence Motion unfolded in the Parliament yesterday as media channels juxtaposed populist images with those of Rahul Gandhi’s ‘wink’. Is there any more scope left for our shared degeneration?

Watching the no-confidence motion proceedings in Parliament on television yesterday, there are two kinds of sentiments that arose within me as a citizen of the nation. The first is regarding the very ethos of democracy and the sanctity of the Parliament and the second is regarding the way the media is capable of reducing every act into its right opposite just to ensure TRP’s.

The Parliament as every student of political science and civics grows up learning is the temple of democracy and it is where the major decisions of the nation are deliberated upon. The Parliament is symbolically representing the very democracy that the Constitution has made India. But today when I watch television telecasts of Parliament proceedings I am pained at the way in the name of discussion, there is noise and in the name of critical questioning of the opponent there is a dirty blame game. I have often come across visuals where Parliamentarians are throwing furniture at each other, beating tables and shouting to make the speaker inaudible, shouting names at each other and even breaking into serious attacks.

It is paradoxical that debate has been replaced by noise, criticality by buck passing and nuanced arguments by shouting.  The Constitution Assembly debates are an engaging read given their critical ideas on a variety of significant issues like the language debate, the caste question, the rearrangement of the states, the relationship between the Centre and the states and the nature and implementation of various articles stated in the constitution. The debates are of such great quality, such profound intensity that even seventy year after independence any person interested in democracy and politics will be interested to read it. It would not be wrong to say that the rigour, zeal, nuanced culture of debate that earlier taken place in the country is now being increasingly replaced by rhetoric and political manipulation in speech more than intensity and honesty.

Consider the debate that took place in the Parliament yesterday, the way the ruling party chuckled and laughed after Rahul Gandhi spoke, the way that most MPs would not listen to each other and began yelling each time an opponent spoke , the way the Speaker of the House allowed differential opportunities to express opinions to representatives of different parties and an overall culture in which there was more to blame than to discuss, the pressure to win over the vote bank was more of a priority than to deliberate on issues that bothered the common man- it seemed like the portal of a melodramatic scene where love, heartbreak,  anger and revenge were all part of the show. And what did the ordinary citizen do? He/she in front of the idiot box with a fickle remote switching between the Parliamentary debate and a rotten Bollywood film playing on another channel.

The media went a step ahead with its absurdity and made ample use of its ‘third-grade Bollywood sensibilities’ by posing together Rahul Gandhi’s footage as he winked after hugging the surprised Mr. Modi and that of Priya Prakash , a young girl who shot to fame and became viral for her attractive ‘wink’. Hours went by and all we could see on news channels was a dimpled Rahul and a pretty Priya ‘winking’ at each other across television screens. The evening brought in the news of the ‘Privilege Motion’ and the BJP spokespersons across the television channels telling us how under prepared Rahul was and how he really could not have hugged Mr. Modi with all his heart as he was afterall a ‘Naamwala’(Privileged) and Mr. Modi a ‘Kaamwala’( working class).

The two sides threw at each other arrows of sentiments and the blame game turned into an almost Dewaar like melodrama where two brothers walked on two different roads but ultimately surrendered before the same mother. The kinds of visuals and juxtapositions that the television channels used could not have been more hilarious. They only represent the pathology of our mind-sets, our falsehood and temptation for the temporal. Can television channels not encourage sustained debates on the ironies of the political culture?

Can news anchors not ask questions beyond partisan viewpoints and address people’s issues?

An Indian is not just a BJP or a Congress supporter- he is a man/woman who has to get a job to feed his family, a parent who dreams of sending her child to school, a consumer who struggles to buy groceries in her meager income, a patient who waits in long queues to get her old mother treated, a pakoda seller who does not think he is an entrepreneur, a Hindu or a Muslim or a Dalit who has realistic struggles that vote banks politics misses out.

For most people the no-confidence motion unfolded on television just like an interesting IPL match or a matinee on a Sunday. The television channels have added to this grim situation, they have never allowed us to develop a political vigilantism that teaches us to see beyond political manipulations, to think of ourselves and independent and accountable for the fate of the country as a collective entirety.

Last afternoon as I watched the no-confidence motion, I recalled all the innumerable ways in which we have lost confidence as citizens of a nation. We are collectively responsible for this fate.

From Virus Killing Machines to Gigantic Displays: Parliament Readied Ahead of Monsoon Session