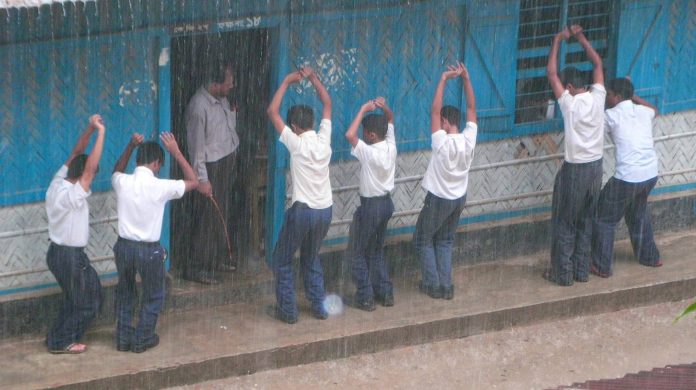 The functionalities of punishment go beyond the individual student and act as restorers of collective morality. In an age where corporal punishment is punishable by law, the reasons for its perpetual manifestation need to be discovered.

Schools are seen as institutions where children undergo socialization to become trained to fit into the external world. Amidst different functions of the schools, one very important function is to discipline the children and to teach the grammar of being obedient. Punishment forms the means to ensure discipline amongst students.

While, it is being argued by any social scientist including the well known sociologists such as Emile Durkheim, Talcott Parsons that nature of punishment has changed in the modern society with restitution characteristics and based on rewards. Nonetheless, in many cases the punishment that is meted out is of brutal and physical nature. This type of punishment is called  corporal punishment which has been very prevalent in India.

Despite the fact that it was banned by the government in 2010, there are many instances of corporal punishment in Indian schools.

According to a study by Plan International, an NGO, more than 65% of children in Indian schools said they had received corporal punishment. The report, which was released in 2010, found that the majority of these children attended government schools. Out of the 13 countries which were surveyed by the organisation, India was ranked third in terms of the estimated economic cost of corporal punishment. The study also found that caste and gender discrimination were high in schools.

According to their research of the sixteen (16) common types of punishment inflicted at home, non-physical punishments constitute a mere 31%.

Another look at the table however reveals that this is not true at all. Homes hardly provide children with any friendly environs. In fact, within the realm of corporal punishment.

Some of the findings of the study are-

In this kind of scenario, what is concerning at the very first place is the impact that it could have on the children. Our schools have been structured in such a way that it is very rarely that any kind of deviant behavior is appreciated even if it means solving the math problem not according to the method given in the book. It rather seems like an assembly line in a factory where students passes different classes under strict supervision and rules, socialising according to what the school demands in particular and the market in general. In a modern age, schools are the primary institutions by which the ideology of the dominant class is being disseminated.

This ideology is nothing but the very core idea of being obedient, subservient and accepting the commands of the superior, negating all kinds of behaviour which are detrimental for the growth of the market. Thus, the function of the school as disciplining the undisciplined becomes pivotal and highlighted while other aspect of it gets overlooked and undervalued. Even the teacher student relationship becomes defined by this aspect whereby the vocation as a teacher of introducing the children to the morality, ethics and mannerisms of the world turns into a forced and suppressive process. There is no space for two sided learning, only a relationship of superordination and one sided accentuation exist.

Thus, incidents like where the headmistress of a government higher primary school in Mangaluru was booked for thrashing students of Class IV because they had not completed their homework in June of this year still occur. Besides, in another such incident school principal in Jharkhand was booked after forcing 13 students to put their hand over a candle flame. Several incidents where female students were forced to strip as a form of punishment have also been  reported.

These cases speak tremendously about the menace of the corporal punishment. It also implies that simply banning a repressive action will not bring the change that is being anticipated. Legally, it is the first step towards curbing these inhuman acts but for a substantial transformation, perhaps the entire system of school education in India needs a revamping. And its beginning has to be with the change in the approach in looking at schools.

In this context, the four myths which Ivan Illich talked about that schools are seen as only place of learning, that its assessment is the only way of evaluating the child and that the prescribed curriculum is the yardstick of progress needs to be questioned. After all, the concern should be why do we learn, for whom do we learn and what do we learn. As already mentioned, punishment is the way of disciplining the students, therefore, it also becomes a means to suppress the voice that wants to question and disagree with the system.

So education which is meant to completely open up our cognitive abilities to comprehend and sensitise ourselves to the realities gets reduce to a tool of the dominant class (it intersects with other social categories like caste,race and gender) to propagate their ideology and eventually get the finished good of the education system  i.e.an army of workers to perpetuate the market ideals obediently.