In a referendum carried out by the JNUTA on Tuesday, 93% teachers voted against the VC while 93% are against the taking of a loan from HEFA. This reveals the growing discontent amongst teachers, and it possibly indicates the need for adequate attention from the educationists all over the country. 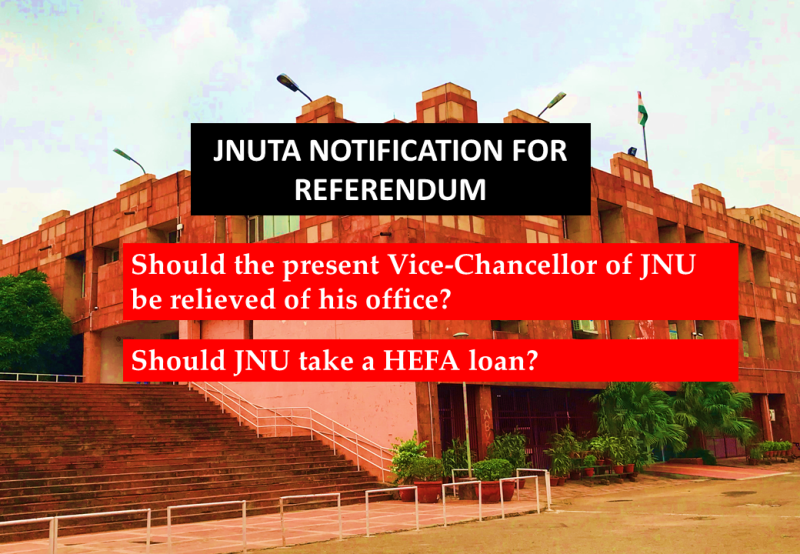 In a referendum that was conducted by the JNUTA on Tuesday, 279 out of 300 voted against the continuation of Jagdish Kumar as the VC. The majority of teachers who voted against the Vice Chancellor feel that he should resign. This referendum was organised following the allegations against the VC of radically compromising upon the culture of JNU and introducing changes without taking into account the interests of teachers and students.

He has been accused by the teachers of pushing the university towards the path of destruction under his leadership.

The JNUTA asserted that a referendum would be an appropriate means to understand the mood of the campus and show whether the majority feel that he should leave the campus. The referendum had two questions the first was regarding the fact that whether the VC should continue in office and the second was about whether the university should take the proposed multi-crore HEFA loan under the VC’s tutelage. 288 teachers voted against the taking of the loan, whereas 4 voted in favour of taking of the loan.

This loan of Rs 515 crore from the newly set up Higher Education Funding Agency (HEFA), is alleged to be in sync with the controversial concept of university autonomy and would place the university in debt. The JNUTA asserts that while the VC will leave it would be having sound repercussions for the university. The shrinking space for dissenting dialogues, a reciprocal exchange between the administration and the faculty is alleged to be disappearing from the campus.

There were a total of 586 voters, 300 was the valid number of votes. According to some of the teachers associated with the JNUTA many teachers had boycotted the elections. The referendum was conducted by secret ballot from 10 am to 5 pm following which the counting was done. JNUTA members assert that there has been no dialogue with the administration and the University stakeholders. They also alleged that legal cases against JNU could have been solved in house had the VC listened to the community composed of teachers and students.

The fact that 93% teachers have voted against the VC in the referendum points to the growth of disillusionment against the administration in the JNU community. Moreover the fact that out of 586 faculty members, 300 came out to give their votes on such a critical issue – is also a significant marker of the growth of dissent. To ensure that the referendum was conducted fairly, external observers like author Chaman Lal, scientist PK Yadava and others were invited.

The JNUTA asserted that the fact that several teachers came to cast their votes in spite of the ambience of fear, individual targeting and heavy showers, represents the culture of JNU.