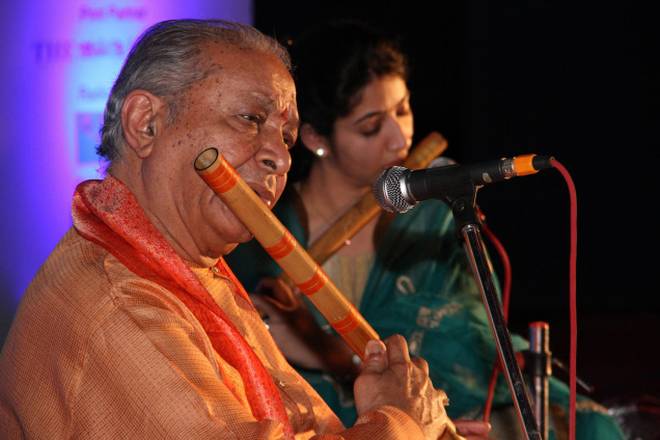 We live in the ‘fast food’ age where patience is a lacking value. As the writer attends a classical music rendition, she discovers how the symptoms of the collective ailment are all pervasive.

Amishsa Ragunathan is Painter based in New Delhi.

We live in an age where music like everything else has been reduced to ‘Fast Food’. Now newspapers and online magazines often tell us that an article is just a ‘2 minutes read’ (who wants to give time in the age of instantaneity!), we live in an age where every gadget promises to ‘save time’, where parents seek appointments to meet their children, where people pay for applications that listen to them patiently, we buy food products that say ‘heat and eat’, we leave messages instead of talking, we ‘listen’ to storybooks instead of taking the trouble to flip every page, we order even our tea online! We want everything to happen with as little mess, as little effort and as quickly as possible!

We read reviews before we discover a film by ourselves, we book guided tours instead of finding new destinations on our own and we lose patience if the first paragraph of a book take time. That day as I sat in a jam packed auditorium, there was nothing that I could more oppressively realise than this irony of our age. We have no patience; we are so used to instantaneity that anything that takes time to mature, that is slow before it gathers momentum, that is intrinsically peaceful- makes us restless.

Yesterday, I found myself at a flute rendition by Pandit Hari Prasad Chaurasia. The maestro created magic with his flute and mesmerized the ambiance. The flute for me is one of those instruments that penetrates into the corners of the being, embalming wounds, speaking to the darkness and pain within and at the same time illuminating a hundred candles of the heart.

I looked around myself, the slow temper of the flute, the entirely instrumental concert with no vocal artist, the elongated ragas, the calm and sedentary position of the artist, his meditative eyes and the silence of the auditorium- many in the audience showed signs off restlessness as they turned back to the ‘more exciting’ screens on their phones and got lost in Facebook posts, some whispered in the ears of friends how boring classical music could be and some simply rose to leave the hall by the time the first raga had finished being played.

What was it about classical music that made us uncomfortable, was it the temper or the fact that it was meditatively calm opposed to the highly commercialised television performances that we are used to seeing?

Our reality shows with grand stages, with celebrity judges, children whose innocence is covered by layers of makeup, where ‘singing’ or ‘dancing’ are essentially consumable products in the entertainment market as are soap and oil in a grocery-opposed to these, classical music that we were experiencing was essentially meditative. It requires decades of practice and dedication, cultivating a sensibility for art, the ability to observe and meditate. I look at the artist’s eyes, how saintly was his expression. He dedicated his entire life to his flute and the flute revealed its magic in the way it sat between his lips.  As many among the audience, fidgeted and turned restless- he remained undisturbed.

The quality of an artist is his meditative nature and we have lost it in our super-fast age. Our radio channels ruin classic songs by playing one for 20 seconds and switching to another, our news channels speak of lynching and fashion parades in the same bulletin, our tongues cherish ‘fast food’ to food cooked with time and patience, we judge books by their covers, films by the glamour of their actors and choose travel destinations based on the quality of the shopping destination there. Amidst all this, Chaurasiya’s flute took me to a time where life was simpler and humans less complicated.

Not just a Matter of Ragas: indigenous music in the hands of globalisation