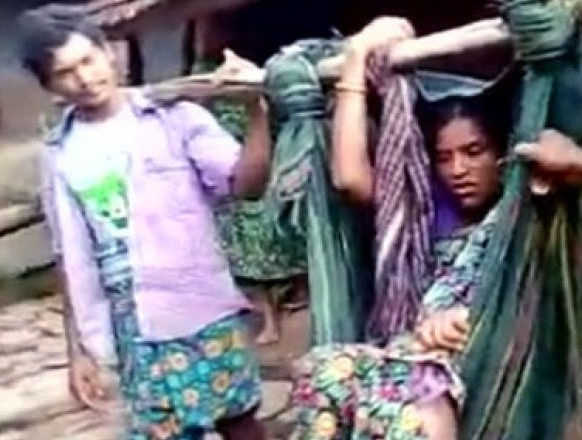 In Masaka village, Hyderabad a woman was compelled to give birth on the makeshift stretcher in the absence of medical care nearby and the poor condition of the roads in the area which makes vehicular transportation impossible.

Hyderabad: We know about the pathology of roads in the nation. Roads are one of the most critical components of the nation’s infrastructure as it is through roads that different parts of a country are connected to each other.

The absence of quality roads implies that not only do several remote areas of the nation remain disconnected from the metropolitan cities where essential services like schooling, healthcare and banking sectors are located but also that in times of human crisis; people find it difficult to sustain themselves within such a context. This came to light once more through a heart wrenching story from Masaka village,  where a pregnant woman was being taken to the hospital located several kilometres away by her relatives in a makeshift stretcher when she gave birth to the child, in the middle of the journey.

The roads that take the villagers to the nearest hospital which is seven kilometers away is a broken and dilapidated one and travelling on it takes enormous amount of time. Due to the absence of proper transportation facilities and lack of ambulance service, the woman as carried on a makeshift stretcher by relatives but she gave birth midway and thus the family returned back home with the new-born child.

This is not the first incidence of this type and earlier this year we heard similar stories from other parts of the country like Chhattisgarh where a woman was compelled to give birth in the middle of the road as the hospital was far off and there was no ambulance facility. It is ironic that poor connectivity through roads and the absence of quality medical care near every village and town continues to be one of the major hindrances that the nation is facing.

It is embarrassing and shameful that as a nation we still haven’t been able to provide quality healthcare to all and even the basic minimum has become a privilege of the elite. It is time that the health sector is revived and made more inclusive, to treat with equal dignity the rich and the poor.