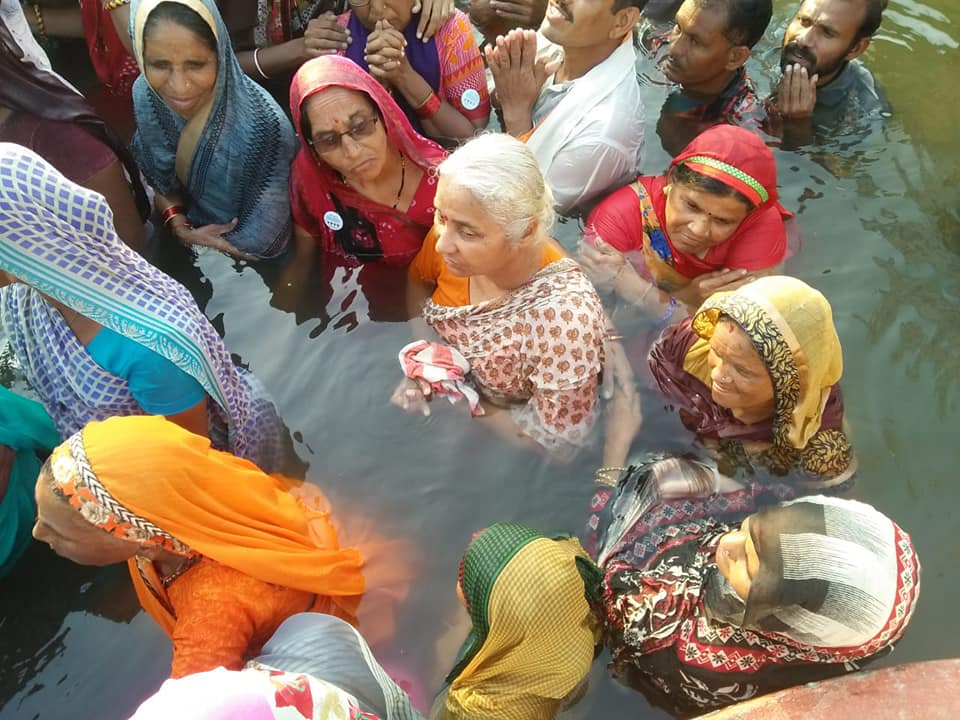 Exactly after a year when the claims made by the Modi government resonated in the nation- thousands of ordinary people composed of farmers, labourers, tribes and fishermen from Madhya Pradesh, Maharashtra and Gujarat have initiated a protest against the very project that claimed to be life altering for them.  These are the communities which are living, working or gaining livelihood from the river Narmada. The form of struggle that they have adopted is Jal Satyagraha.

The children, women, men along with the elderly population of the community are collectively participating in this protest. The people would immerse themselves in the Narmada River in Madhya Pradesh and fight for their rights to livelihood and education.

The residents of the district claim that their right to livelihood has been taken away from them. Nearly 35000 families live in flood prone areas near the Sardar Sarovar Dam, 16000 families are affected due to the disturbance caused in the back water level, and there are thousands who have not been compensated properly.

The Narmada Tribunal and the rehabilitation committee have not yet been able to rehabilitate the families who were displaced during the construction of the dam. For instance there are 4500 families in the 65 villages of Bhadwani District that still await their compensation and right to a dignified existence. The areas where the families have been relocated do not have basic facilities like drinking water and roads. The government has agreed to give water from the dam to 481 companies while the farmers of the drought affected areas are dying for every drop. The villages around the dam in Gujarat are affected by droughts but big corporate giants like the Reliance and Adani groups receive thousands of litres of water every day.

The government has been unable to develop even a single village for the people of the community who have been displaced from their own land for the construction of the dam.
– Shekharchand, Municipal Corporation

Nearly 6000 fishermen from Baruch district are unemployed. The government created a committee for fishing in the region but have barred indigenous fishermen from doing so. It is also feared that the pipeline system which is devised to fill water in rivers like Shipra, Gambhir, Kalisindhi, Parvati form Bargi, Indira Sagar, Onkareshwer at the of 15 to 20000 litres per second will lead to a drought condition in the river Narmada. There is no accountability or a sound plan for providing water on the several dams constructed on Sardar Sarovar and Narmada. The government has simply washed off its hands from every kind of rehabilitation responsibility and has only made the lives of the local people more difficult. The tribal communities from Maharashtra and Gujarat have still not received land or employment to sustain themselves in the new circumstances.

In continuation with the demand for better rehabilitation and compensation mechanisms the local people of these states have resumed their Water Stayagraha. The Water Satyagraha has been led by community leaders like Medha Patekar and has received great participation from the local community. Film Maker, Sunil Sukhantankar, writer Rohini Mohan, educationist Shilpa Balla and various other supporters joined the protest.

Jaswinder Singh, the head of Akhil Bhartiye Kisan Parishad in Madhya Pradesh, stated that the Sardar SarovarDam Project has still not been completed; there are families which are yet to be relocated. He further added that the water Satyagraha is an eye opener to the PM’s development model. The head of the Municipal Corporation, Shekharchand said that the government has been unable to develop even a single village for the people of the community who have been displaced from their own land for the construction of the dam.

No Land, No Livelihood: Launch of New Satyagraha in Narmada Valley

Survival, not elections, on the agenda in this Maharashtra village

From Varnika Kundu to Medha Patkar : Busting the Myth of ‘Bharat Mata’

The Echoes of Injustice and Resilience in the Land of the Narmada: the Unfulfilled Promises of the discourse of Development