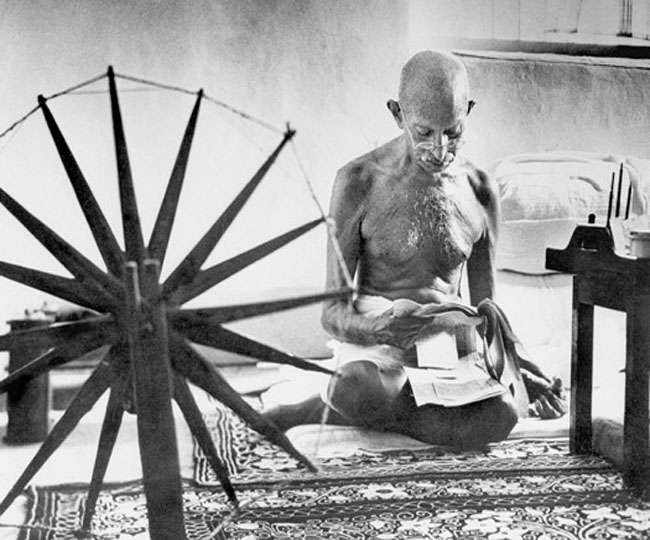 From 1932-1933 Gandhi spun cotton through his Charkha in Yarvada Prison, Pune. The Charkha symbolized the Gandhian dream of village self-sufficiency and empowerment – today as a letter written by Gandhi to a friend in Gujarat is auctioned for an exorbitant fee, it is time to reflect on the uncomfortable relationship that the generation shares with Gandhi.

Ira David is an Independent Journalist – based in Allahabad.

The Charkha was one of the most significant symbols that Gandhi used in his lifetime. The Charkha for him was not merely a spinning wheel that produced cloth but rather a movement against the empire that sought to destroy India’s indigenous economy.

It was one of his strongest weapons of resistance because through its functioning it epitomised the agency of the ordinary people, their power for creative resistance. When the British held Gandhi captive in Yervada prion from 1932-1933 – Gandhi spun thread through the Charkha.

The trajectory of the Charkha evolved from Gandhi’s personal companion to a nationwide movement that encouraged his countrymen to spin their own cloth rather than stay dependent on British cloth. For Gandhi, the Charkha had a unique appeal because it had the capability of bridging together the ideal of village self-sufficiency and the broader political struggle against the imperialist powers.

He saw it as the tool for independence, removal of poverty and non-violent struggle. The British/Manchester factory made cheap cloth had begun to take over the Indian market leading to large scale unemployment among the hand-loom weavers.

Gandhi’s insistence on the use of the Charkha showed the path to a dignified existence for thousands of Indians. Recently a letter written by Mahatma Gandhi to a friend from Gujarat named Yashawant Prasad stressing the importance of the Charkha has been auctioned in England. The letter was written by Gandhi in his own handwriting in Gujarati.

The letter is undated but has relevance because it expresses the importance that Gandhi attached to the Charkha. The auctioning of the letter for $6,358 is indeed a paradox. The identity of the bidder has not been disclosed yet. Gandhi encouraged each Indian to devote a certain number of hours every day to the Charkha and associated it with the independence and well being of the poorest man in society.

Perhaps the highest bidder at the auction would use the letter to adorn the walls of his palatial residence as an artefact locked in time.  The entire Gandhian movement was targeted to the empowerment of the poor, towards enabling them to free themselves from the autocracy of the elite and giving them the chance to self-sustain and resist the onslaught of the market forces.

Today when Gandhi’s letter gets auctioned and is reduced to being only a priced artefact, as a symbolic capital on the walls of the elite- it is time to think of how we continue to kill Gandhi each day.

Far from learning from his words, leading a life in resonance with his radical ideas – we have reduced Gandhi into a utopia that is mocked and ridiculed or at best seen as impractical and esoteric.

Today we face the onslaught of the oppressive market society where we no longer have an agency of creative power, where from food grains and oil to medicines and education- everything is privatised and monopolised by the corporate lobby. Gandhi’s vision of the Charkha holds true more than ever in the contemporary times, the message that Gandhi gave through the Charkha is more relevant than ever today. Let us not auction the ideas, the values and dreams that Gandhi stood for or else we shall be impoverished.