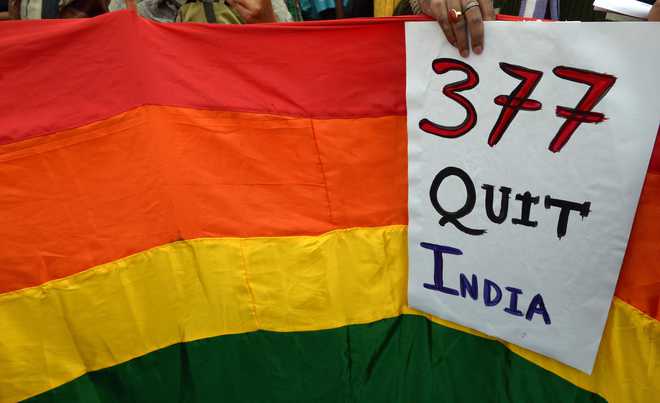 Section 377 stood for an oppressive orientation to alternative sexuality while its decriminalisation marks an important step towards a democratic and cosmopolitan approach to sexual preferences. It is not just a victory for the LGBTQ community but for all those who dream of an egalitarian and inclusive society.

The Section 377 of the Indian Penal Code was partially scrapped by the Supreme Court of India making homosexuality legal and recognised by law. The landmark judgement has come as a respite for many in the LGBTQ community for whom the struggle for rights and recognition has been a long and sustained one.

The decision of the Supreme Court is not only a reminder of a progressive and open minded gesture by the highest body of justice in the nation but is also a significant affirmation of the lives and choices of a considerable section of the masses who have for generations been victims to harassment, condemnation and have been denied a meaningful existence in the absence of a law that guarantees them this right to express and live with dignity.

Alternative sexualities have been talked about through academic articles and research papers, through the sensitive and insightful works of gender rights activists, gay-rights advocates and other people who have for long fought to create a nation that respects sexual choice and diversity in sexual preference, documentaries and films highlighting the struggles, pain and dilemma of the LGBTQ community have also reminded us time and again of the societal need to accept and acknowledge sexual diversity.

Despite efforts being made on several fronts, it is ironic that the social fabric has still not become comfortable with alternative sexualities and in a traditional society like India- there seems to some sort of embedded discomfort with the acknowledgement of the ‘other’.  No wonder, the ‘coming out’ stories have often been revelations of family and neighbourhood prejudice, of being tabooed and boycotted by loved ones of being alleged of some sort of a crime and so on.

By merely ignoring such an important issue and handing it to the judiciary is not a solution. By taking such a move, the government is setting a wrong tradition for other governments – Prof Manoj Jha

The legal measure is undoubtedly one of the most important and legitimate ways of addressing the crisis in society but what must also accompany it is sustained work with members of the community, for their mind-sets have to change. The Opposition has alleged the ruling party of maintaining an unwanted silence on the criticality and importance of the recent ruling and condemned them for being insensitive to such a critical concern. RJD Spokesperson, Manoj Jha recently said ‘By merely ignoring such an important issue and handing it to the judiciary is not a solution. By taking such a move, the government is setting a wrong tradition for other governments’.

Justice Chandrachud who was a part of the five-bench team who lead the proceedings on Section 377 said that the government did not do the right thing by distancing itself from such a sensitive matter and laying the sole onus and responsibility for it on the judiciary.

It is true that the silence that is being maintained by the ruling government on this matter reminds us of the established forms of discomfort with alternative sexualities prevalent in the country. However what we do need to remember is the fact that modernity entails the acknowledgement and acceptance of progressive ideals and no matter how much we invest in bullet trains, defence technology, space research or nuclear power plants, as a nation we will not become truly ‘modern’ and ‘liberatory’ of we don’t become open to diversity of all kinds whether sexual, cultural, religious or communal.

It must be asserted and emphasised by the government that it will stand with and support all those who have not been respected and treated with dignity for their alternative sexual orientation. The silence of the ruling government is saddening at the least and pathological at the most.