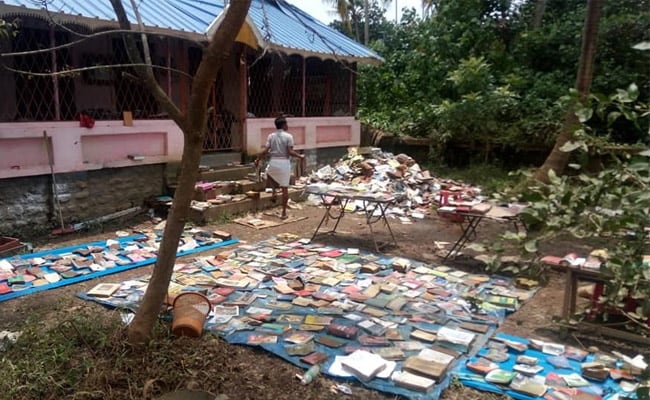 The importance that is given to public libraries as valuable resources for the generation of constructive public imageries is immense; the emphasis that Kerala laid on rebuilding its damaged libraries after the floods is inspiring and exemplary.

Jurgen Habermas, German sociologist and philosopher, explained the idea of “Public Sphere” in his noted work ‘The Structural Transformation of the Public Sphere’ (1962). By the public sphere he referred to an intellectual space composed on citizen-led discourse marked by a character of conversation often local in nature about social and political developments, this kind of conversations, he further adds, is often felicitated by public spaces like coffee shops, salons, book clubs, press clubs, art journals and magazines.

Public Sphere is an important space to evoke critical thinking on matters of society and polity which influence the mind and the action of people and also sometimes the state authority. Gandhi explained the importance of a public sphere like an Ashram as an important site to influence the state actors by the will of the masses during India’s freedom struggle.

Libraries are often considered as being part of the public sphere although there are many debates about it, scholars like Sandra Barman have asserted the need to invite further research on this subject. Michael M. Widdersheim in his paper Conceptual Modelling of the Public Sphere in Public Libraries, has laid out several points on which libraries should be counted as part and parcel of the public sphere,  he mentions that the communication that occurs at the intra, inter, and external discourse levels affects how the public library functions as a public sphere.

The library, apart from the academic debate, can be considered as a public sphere because it does provide a space for communication away from the private sphere, there is a language of communication although communication does not happen directly like the way Habermas mentions (sometimes it can be direct) but there is a dialogue between the reader and the author through the medium of books.

There is penetration of ideas and also evocation of critical thinking that emerges out of the library. It introduces the reader to varied disciplines and subjects and to different languages as well, ideas and counter ideas are well placed under a roof, to enhance the reader’s mind and drive their capacity to an altogether new level.

Surrounded by the back waters, the state of Kerala was hit by massive floods due to unnatural rains commencing 15th august 2018, leaving the state and its people in a condition of great distress.

Indian government declared the calamity faced by the state as “calamity of a severe nature”. Nearly one sixth of the population of the state has been adversely affected by the flood and thousands of villages have been destroyed, post the floods the state is now trying to revive or repair all that was lost, although the human loss and the emotional damage can never be mended but to bring the people of Kerala to their earlier spirit and provide them their homeland in its original condition, it is mandatory for the state government of Kerala and also the central government to help the state both in infrastructural and financial means.

A Library is as important as a Bridge

Amidst all other infrastructure revival projects that the state government of Kerala is committed to revive, is the State Public Library which has suffered huge losses due to the flood. All the four public libraries have suffered huge damage in terms of damage to books, textbooks and infrastructure.

Since the books in the library were not conserved by any technological innovation they were subject to damage in the massive floods experienced by the state, very many old books and literature has been lost with no scope of coming back, but the government and state library council is determined to build back the library. The state library council has asked for help by the state government and has also asked for the introduction of advanced technological methods for preserving texts and books, such that they can be saved from salvaging or any other form of damage.

A Community’s Library becomes its Treasure

Another remarkable step taken by the Kerala government to build back the damaged libraries is the state library council’s idea of the book collection drive wherein every household is asked to donate books to the library such that its local form can be revived and on a larger scale the council has even asked libraries of different states to donate books published after 2010 to them as part of the National Public Library Movement such that books can be circulated to flood-affected areas as per demand.

N. Panicker is credited for organising a library network in the State. He was associated with the formation of Sanathana Dharma Vayana Sala in Neelamperur, Alleppy. He succeeded in getting a grant of Rs10 from the government for this library. He realised that the government and official agencies have to play an important role in promoting the library movement. He travelled all over Travancore, met the enthusiasts in the library movement, and secured all possible assistance from them in forming rural libraries. He devoted his life entirely for the cause of the library movement in Kerala.

Kerala experienced one of the worst floods in history and what cannot be negated is the fact that it would take years before Kerala can experience a normalcy. However right from the onset when a state like Kerala lays so much of importance on rebuilding its libraries, it surely gives out a message. From a high literacy rate to a culture of cultural syncretism, lower rates of violations against women to records in hygiene- the importance that Kerala has given to education in general and to libraries in particular is remarkable.

Like other states, Kerala could have also exercised its power of state autonomy by asking for investments by foreign agents and making massive deals in the name of development, and quite possible they could have attracted investors as well but the fact that the state realises the importance of books and libraries in public spaces is what refrains them from doing so.

Books have meaning, they have value, not only economic but social, political, cultural and emotional, they transcend the shallow boundaries of caste, class, culture, language, race, ethnicity and gender, and their availability in a public space like the library opens its arm for one and all. In times where states like Uttar Pradesh, Andhra Pradesh, Telangana have attracted huge investments through foreign agents for development, Kerala’s development model is unique and destined to become an example for other states.