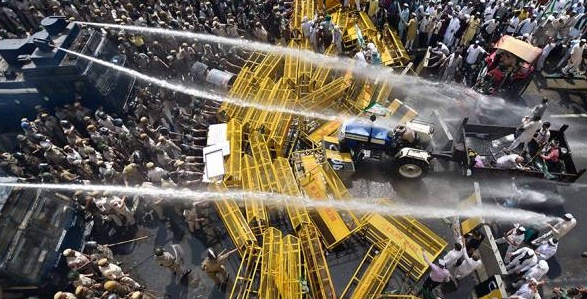 Thousands of farmers from various parts of Uttar Pradesh have marched to the capital to assert their demands before the Centre. Will the nation turn a deaf ear to their rights or will it pay heed to its demands?

Thousands of farmers took to the streets on Tuesday morning as participants of the Kisan Kranti Yatra. The protesting farmers are members of Bhartiye Kisan Union (BKU). They were stopped near the Delhi-UP border which remained heavily barricaded. The farmers were coming to Delhi but were stopped by the UP Police mid-way through the protests. The farmers who have been part of the protests have traveled on foot or in tractors from various places in the state of Uttar Pradesh. The distressed farmers are now marching to Delhi with a range of demands such as loan waiver, subsidized electricity and fuel, pension for farmers and proper implementation of the recommendations of the Swaminathan Commission. The representatives of the farmer’s body are presently meeting Home Minister Rajnath Singh.

Why were the protesting farmers stopped?

The farmers were stopped at the UP-Delhi border that remained heavily barricaded. The question that needed to be addressed was why the march of the farmers had to be stopped.  The argument given by the Delhi Police was that the protest had to be stopped because it could lead to disruption of traffic and become a law and order problem. The logic that was offered was that of public inconvenience and law and order issues.

Teargas shells and water cannons were used by the Police to stop the farmers on their way towards Delhi. Nearly 30,000 farmers had started marching form Tikait Ghat in Haridwar on 23rd September towards Delhi, with a series of demands and allegations. This unfolded when angry protestors tried to break the barricades and proceed ahead. Several protestors have been injured in the process.

Who organised the protest?

The Bharatiya Kisan Sangh (BKS) is an Indian farmers’ representative organization affiliated with the Rashtriya Swayamsevak Sangh and a member of the Sangh Parivar. This kind of a protest has been undertaken for the first time after the death of Mahendra Singh Tikait, founder of this organisation.

What is being asked for?

The angry and distressed farmers are protesting for the implementation of recommendations of Sawminathan Commission report. This report has made several recommendations keeping in mind the raising farmer’s suicide and atrocities faced by the farmer community such as inserting “Agriculture” in the Concurrent List of the Constitution. Recommendations were made about land distribution to address the crisis in Indian agriculture. Setting up a mechanism to regulate the sale of agricultural land based on quantum of land, nature of proposed use and category of buyer were also issued by the Commission. It is imperative to raise the agricultural competitiveness of farmers with small land holdings. Productivity improvement to increase the marketable surplus must be linked to assured and remunerative marketing opportunities. Rural people in India depend on a wide range of bio-resources for their nutrition and livelihood security. Also they demanded for loan waiver, subsidized electricity and fuel, pension for farmers above 60.

The farmers are protesting to put forth their demands before the state such that their issues gets addressed, neither they used force nor violence but only their collective will to get justice and still they are not being allowed to raise their demands. This is not the kind of democracy that we wish for.

It is ironic that as the nation commemorates the birth anniversary of nationalist leaders like Mahatma Gandhi and Lal Bahadur Shastri who devoted to a great extent their political careers to the distressed poor in general and the farmer in particular, we oppose and oppress the farmer’s voice.