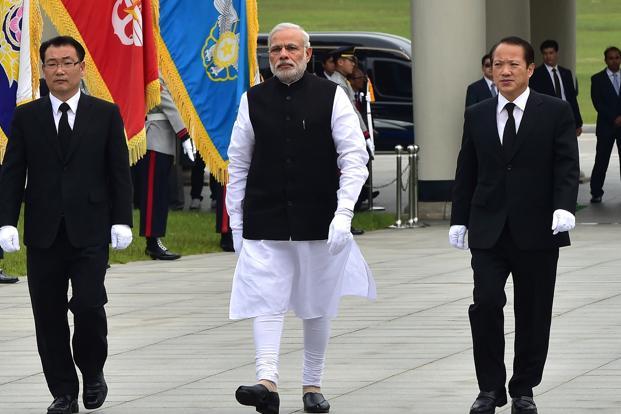 The Seoul Peace Prize was awarded to Prime Minister Narendra Modi for fostering economic growth and furthering the development of democracy, as several Korean civil society groups staged a protest against the awarding.

[dropcap]S[/dropcap]eoul Peace Prize is an honour given by the Korean Government to people who have contributed in withholding peace globally. This year the government has decided to award the prize to the Indian Prime Minister Mr. Narendra Modi. The Korean government has decided to give the award to the Indian Prime Minister for “fostering economic growth as the world’s fastest growing large economy and furthering the development of democracy through anti-corruption and social integration efforts”,  reducing wealth inequality through “Modinomics” and for accelerating human development and democracy in India.

While on the one hand, the Indian government accepted the award with great pride and honour, the Korean civil society organisations have shown large scale disappointment towards this decision. Korean civil society groups in a press conference asserted that giving Narendra Modi the award was akin to “Chun Doo-hwan receiving a peace prize”.

Chun-doo-hwan was the President of Korea and was awarded death sentence for his involvement in the Gwangju Massacre or May 18 Democratic Uprising where the Gwanhju citizens took up arms when the local Chonman University students were fired upon, killed and beaten up the government officials for demonstrating against the martial law government and it was estimated that nearly 600 people were killed in the massacre although Chun-doo-Hwan was pardoned later.

About 26 groups of Korean NGOs demanded the government to retract its decision of giving the peace prize to Mr. Modi, as they opined that giving the award to Modi was a disgrace to the past laureates of the award.

As reported in The Korean Hearld The Modi’s government’s involvement in the 2002 Gujarat riots or the Godhara riots which led to the killing of more than 1000 people mostly Muslims has been highly criticised by the Korean civil society group.

Modi has been appreciated by the Korean government for his efforts in accelerating economic growth through his so called methods of “Modinomics” but the celebrated project called demonetisation was a failure in both a structural and operational sense, as reported by the Reserve Bank of India.

The RBI’s Report where it stated that  99.3 per cent of high-value currency notes that were demonetised were deposited back and the remaining 0.7 per cent cash that that has not come back would probably have returned back too if the RBI had allowed them to be given back. Mr. Modi’s objective of catching black money and weeding out fake notes – failed largely with the demonetisation failure.

Not only economic failure but failure at the societal level has also been witnessed under the Modi regime, as ever since the minister came to power tensions between Hindus and Muslims have increased. Muslims live under the constant threat of neglect and attack under the Modi regime, although the attacks by the government might not be direct but the entire discourse of renaming spaces like roads, railway station, cities, lynching in the name of culinary practice and building a place of intolerance has been legitimised in the contemporary times.

These are indirect attacks by the government on Muslims to evoke polarisation amongst Hindus and Muslims in order to eliminate Muslims and build a Hindu state.