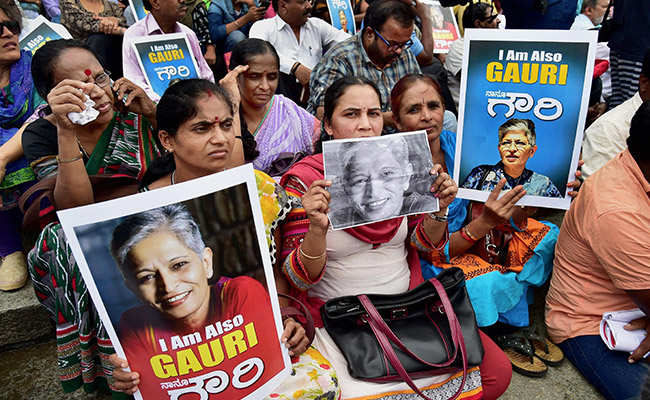 ‘Death Watch’ is a recent report brought out by the IPI regarding the hostilities offered to journalists in nations such as India where in contemporary times several journalists have been at the target for speaking against the establishment.

Amaira Alaquiddin is a Writer and Civil Rights Activist based in Hyderabad.

The International Press Institute came up with a report entitled ‘Death Watch’.  It is in the background of this report that we are trying to make sense of the hostility shown towards journalists in our times.

Since 2017, it has been recorded that 12 journalists have been killed and only six perpetrators of the crimes have been arrested so far. It is also argued that some of the arrests made in the context of the murders are also controversial, the Vienna based global organisation of editors, journalists and media executives have recorded in the report. It was recently on November 2 that the world commemorated the International Day to End the Culture of Impunity for Crimes against Journalists called by UNESCO.

When one carefully reads the report on its understanding of the crisis in the Indian context we learn that the report asserts that most of the journalists who have been killed were killed because of their writings and views on contemporary issues of politics while others were killed on the spot while they were reporting the news.

The IPI report makes a point that the most unfriendly nations for journalists are Mexico and India. They have also said that in both these countries the investigation of the murder of journalists has not been adequately accomplished. The report asserts that the impunity with which the journalists have been murdered and the inadequate speed of investigations raise the question whether the nation is conducive to journalism. It was only recently that a senior journalist Gauri Lankesh was murdered outside her house in Bengaluru in daylight for her writings against the government’s stand.

The Special Investigation Team (SIT) that had been made to investigate the case have arrested fourteen people and said that they were upset with Gauri Lankesh for her anti- Hindu stands. The SIT has confirmed that the weapon that murdered Lankesh was also used in killing M.M. Kalburgi in 2015 and Govind Pansare before that.

It is worthy of probe that some of the people who have been arrested with the charge of murdering these journalists have stated that they have been forced into confession. Media reports have also doubted the credibility of several of these arrests. Journalists like the Editor of Rising Kashmir, Shujaat Bukhari had to pay with their lives for adhering to objectivity in journalism according to the report. He was killed outside the office on June 14, 2018.

It is till today that Shujaat’s case is unresolved. The report also asserts the plight of several other journalists like Santanu Bowmik of the channel Dinraat who was killed in 2017 on Tripura while he was reporting about an agitation.  In another sensational attack over journalists, the report recalls the killings of Navin Nischal of Dainik Bhaskar and Vijay Bhaskar who were killed while doing a report in  Bihar.

The report brings to light the several killings that have taken place in recent times and the inappropriate investigation that has been followed in the matter. What is ironic is the fact that a vibrant democracy like India has been named as one that is hostile towards its journalists. Journalism is an extremely significant pillar of the socio-cultural milieu and without it no society can become open. The killings of well-known journalists in our times reminds us that a lot needs to be ensured to turn India into a conducive ecosystem for objective and open spirited journalism.