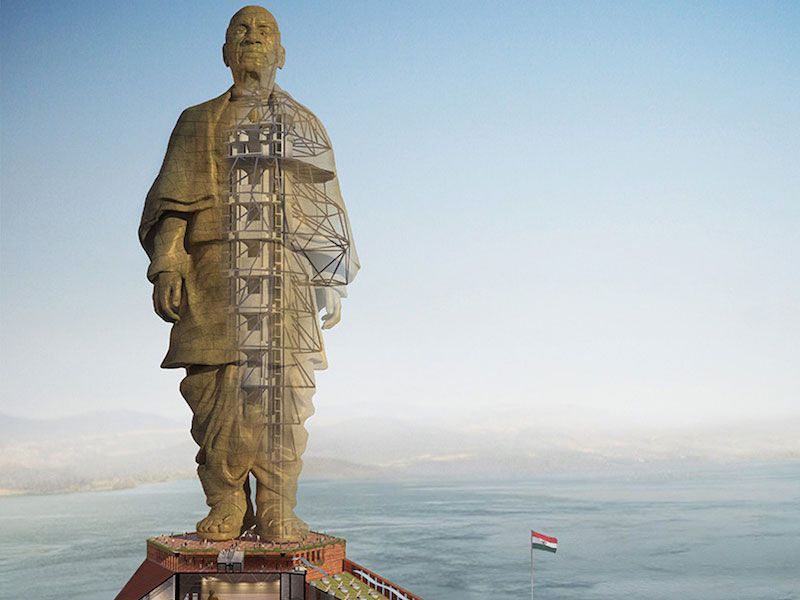 The singing of the national anthem in cinema halls has been now accompanied by the proposed installation of 100-ft tall tricolours in the 75 busiest railway stations across India.

The politics of symbolism has been used a lot by the present political regime as an instigator of quick public sentiment. From the construction of statues of nationalist leaders from specific ideological currents, renaming cities in order to erase and promote a certain definition of historicity to making all attempts to generate a very non-dialogic, dominant notion of Indian-ness, the strong use of symbols has indeed captured the imagination of the nation.  The politics of naming and renaming cities and towns, installing gigantic national flags in major towns and railway stations, rewriting the history syllabus by eradicating the contributions of some communities and glorifying others has been part and parcel of the contemporary political tradition.

It is in this context that it has to be asserted that no sane citizen will be against a legitimate sense of belonging to the nation, of taking pride in the struggles of its people towards freedom and justice, the contribution of the people of the nation for building up its culture and tradition and its rich heritage but what is seen to be problematic is that the nation as a collective whole is taken for granted, its history is understood partially and a deliberate effort is made to build a narrow/dominant  notion of the nation.

Loving our country and taking pride in its legacy and the leaders who served and cared for the nation is not something any Indian be they in India or abroad will ever deny. An Indian also takes pride in the legacy of the culture and heritage irrespective of the day-to-day complains he or she makes.  and nationalism or that pride is not an object to be worn on sleeves, it is rather instilled and engrossed and is something which shows up at the right place or moment but our government had set the agenda since the very beginning to make it point that people keep on proving their love for the nation or nationalism time and again. Be it by making it mandatory to sing the national anthem before a movie screening across the theatres in India or erecting the tallest of Sardar Vallabh Bhai Patel, the government has done it all despite opposition.

In a recent move, the Railway Board of India has decided to install a 100 feet Tricolour at 75 major stations across India by 31st December this year. The flag is supposed to have focus lights and would be under the supervision of the Railway Protection Force, and the idea to install these flags is to invoke the feeling of nationalism in our people. The cost of one flag as estimated by the railway board itself would be around 9 lakhs and the cost of 75 such flags leaves me wide-eyed only.

Its alright to have visual images or statues about are nation and our culture and rather sometimes it is needed too, to remind and sometimes commemorate or rather say to keep the legacy alive, but is it necessary to make such things a priority or an agenda that the government spends the taxpayers money on a statute or national symbol building spree?

Recently, India was ranked on the 103rd position out of 180 countries on the Global Hunger Index, malnutrition has been a pertinent fact of the country since ages, farmers marched from Uttarakhand to Delhi just to get their voices heard and appeal the government to listen to their atrocities, Air pollution has grappled the country hard and the situation is just becoming worst and worst every time, amidst such a scenario do we really need symbols and statues.

Indian Railways is the fifth largest rail network in the world with 1.3 million employees and today railways face a burden of Rs. 4,83,511 crore for execution of 458 unfinished projects, in which most of projects are related to electrification, track renewals, bridge works and doubling of tracks. Most of the railway tracks in India continue to be manhandled and hence are prone to accidents of serious nature like that of the recent Amritsar Tragedy during Dussehra this year in which nearly 100 people died.

I don’t oppose the idea of having a decent amount of symbols and statues in the country for beautification or continuation of a particular legacy or culture, but if this is done when we have surplus money left after fulfilling the basic needs of the people, it would have been a rather welcome idea. More ever  how do symbols create nationalism or is it important for an individual to give a test of his or her nationalism time and again, is it important to be surrounded by the visuals of national symbols everywhere? Is this the only thing which the nation has to offer to its citizen?

We are surrounded by a plethora of unsolved problem related to our basic needs and survival and in such kind of a situation the government plans to spend money on ensuring that every citizen by heart learns the lessons of nationalism which the government is trying to teach. This isn’t something for which we elect our representatives in every five year nor is it the kind of expectation that we have from government and it is high-time for our government to also realise this fact, that nationalism is not something which one can force it is rather instilled, so the route of symbols and statues will lead nowhere but to a wastage of the hard earned taxpayer’s money.